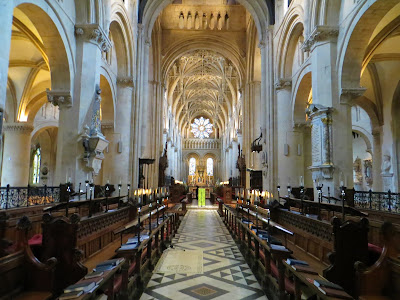 
I have been going to church all my life. I was baptized as an infant at St. Luke’s of the Mountains Episcopal Church in LaCrescenta, California. I was an acolyte at St. Barnabas Episcopal Church of Dunsmuir. I was confirmed at age twelve at St. Paul’s Episcopal Church in Klamath Falls, where I was an acolyte, lay reader, and choir member. I was baptized once more in a creek in Oregon at age seventeen, after I moved to the Foursquare Church. I was then ordained at age twenty-seven at Temple City Christian Church. That should qualify as dwelling in the house of the Lord all my life, “for a day in [God’s] courts is better than a thousand elsewhere.”

What is true of me might be true of you as well. Your story might be different in its details, but you have been dwelling in the House of the Lord your entire life. In fact, I know that at least a couple of our members were on the cradle roll of Central Woodward when we were in Detroit. Of course, going to church and dwelling in God’s presence might not be the same thing, but it is a start!

Ours is an embodied faith. It’s tied to place and space. We are followers of Jesus, whom the Gospel of John reveals is the Word of God in the flesh (John 1:1-14). He died on a cross in Jerusalem and was resurrected the third day. As John tells the story, Thomas put his fingers in Jesus’ wounds. That is the confession of the Gospels.

But we can also go back further in time, to our Jewish roots. Judaism is also an embodied faith. For Jews the land is important. While the Temple may no longer exist, it remains part of their memory. Here in Psalm 84 we are reminded of the importance of the Temple as a witness to God’s presence with God’s creation.

There is a growing trend for people to describe themselves as “spiritual but not religious.” Such people may believe in God and even revere Jesus. Some might even affirm his divinity. However, they don’t see much value in so-called “institutional religion.” I understand why people are moving in this direction. The church is not a perfect embodiment of the Gospel. While I understand the concern, I still believe we’re better off being “spiritual and religious.” While the church at large has its drawbacks, I believe that our connection to God through Jesus is best facilitated within a community that  treasures and passes on the traditions of the faith from one generation to the next. We may adjust our beliefs over time, but they need to be rooted in something beyond ourselves. We Disciples consider ourselves to be rooted in Scripture, especially the New Testament. We trace our spiritual ancestry back through Paul and the Twelve to Jesus, and then to prophets, to Moses and to Abraham and Sarah. Their embodied witness is the foundation for who we are as Christians who are invited to dwell in the presence of God.

We have been spending time this summer in the Psalms, and this morning we bring that journey to a close. Early on in this journey we sang one of the “Songs of Zion,” the songs that pilgrims may have sung as they journeyed to Jerusalem.  We heard the call to march to Zion, “the beautiful city of God.” Psalm 84, like Psalm 48 is one of the “Songs of Zion.” It begins with the words: “how lovely is your dwelling place, O Lord of hosts! The Hebrew word that is translated as “hosts” is “Sabaoth,” which can be translated as armies. In other words, we have been invited to envision God surrounded by a mighty army, ready to defend the house of God. The psalmist gives voice to the human desire to find security in the presence of God, a presence that is symbolized by the Temple, the House of God.

For much of Israel’s experience, it’s been a nomadic people. This was symbolized by the Tabernacle, the Tent that contained the Ark of the Covenant, you know the one featured in Raiders of the Lost Ark. Things changed as the monarchy took hold, and Solomon decided to build a permanent structure to house the Ark, the seat of God’s presence on earth. Now that the time of wandering was over, they could put down roots and make a home.

Two weeks back Brett and I became nomads for a few days. We drove some 2300 miles across the country to California in his 2005 Ford Focus. You might say that we were pilgrims looking for a homeland in Claremont. By the time we arrived a week ago this past Thursday, Brett was ready to settle in, to make a home.  Even though we had a lot of work ahead of us, Brett was ready to put down roots, at least for a while. After all, a home is where the heart is!

When Solomon dedicated the Temple, which was the house he built for the Lord, he acknowledged that “heaven and earth cannot contain you, much less this house that I have built!” But, Solomon prayed that God’s “eyes may be open night and day toward this house, the place of which you said, ‘My name shall be there,’ that you may heed the prayer that your servant prays toward this place.” (1 Kings 8:27-30).

It’s good to remember that God doesn’t literally dwell in houses made by human hands. Not Solomon’s Temple; not Central Woodward Christian Church. No building can contain God, but there are places that help us focus our attention on God’s presence. When we find ourselves in these sacred spaces, we can say with the Psalmist: “Happy are those who live in your house, ever singing your praise” (vs. 4).

There is a word that describes this sacred reality. That word is sacrament. The Temple was a sacramental place, which helped reveal God’s presence in the world. For us as Christians, we might not have a Temple, per se, but there are places and visible actions that serve to embody God’s grace and presence to us. These become, spiritually, our true home.

I like what J. Clinton McCann writes in his commentary on this Psalm:

For instance, we come regularly to what forms the centerpiece of any real home: a table. But for us, this is the Lord’s Table, where we eat and drink with Christ and one another as a sign of our belonging.   [“The Book of Psalms,” NIB, 4:1015].

When we gather at the Table of the Lord, in this place, it is a sign of belonging. We declare every time we gather that this is the Lord’s Table and it is open to all. When the Psalmist speaks of being a doorkeeper in the house of God, I’m going to interpret this as a call to welcome everyone into this house, not put up barriers, so that everyone can experience God’s presence.

We may not feel connected to God or each other every time we gather at the Table, but the Table is a sign of God’s ongoing presence in the World. While we might not feel that presence all the time, there may be times and places where we feel especially connected to God’s presence. The words “thin places” are often used to describe this experience.

I experienced one of those “thin places” when I was in England during my last sabbatical. I experienced a sense of awe as I wandered through the cathedrals of Salisbury and St. Paul’s, London, as well as Bath Abbey. These are magnificent structures that bear witness to God’s presence. But, the place and time where I most experienced God’s presence was during Evensong at Christ Church Cathedral in Oxford. This is a relatively small cathedral, but I was moved spiritually as the men and boys choir sang the service. During this rather simple service I felt that tingle of God’s presence in my body. I felt overwhelmed by God’s grace as I joined in worship in the same space where John Locke is buried and John and Charles Wesley were ordained. Yes, we may feel God’s presence out in nature, but there is something especially powerful about being in a sacred space that bears witness to God’s ongoing presence in the world.

I would guess that most of us have had some kind of experience where we’ve felt especially connected to God. It might be in a building or outside it, but in the end, a maturing faith is one that doesn’t live for those particular moments. Instead it puts down roots and attends regularly to the  worship of God in the presence of the people of God. Like the pilgrims in the Psalm, we continually come to this place, singing “a song in sweet accord.”

Let us, therefore, move toward Zion, so that we might find our home in the presence of God. “For a day in your courts is better than a thousand elsewhere!”