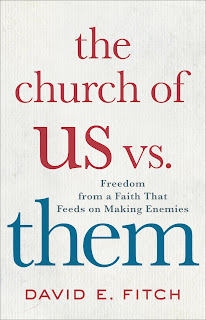 We live at a moment in time where you’re either against us or for us. If you’re not for us, then my must be against us. There is no middle ground. The lines have been drawn and you pick sides, and if you’re on the wrong side of the line you must be evil. Such is true even in the church. We have become adept at creating banners around which we can rally against our enemies. We talk over each other but rarely speak with each other. So, congregations, denominations, even families are divided amongst themselves. I understand the importance of standing up for what is right and what is true. Sometimes, perhaps often, that will create division in the ranks. I also understand that moderation is often a path to the status quo, and not to the common good. But is everything up for grabs? Is there no room for conversation among those who disagree on important matters?

Might there be a different way of living in the world than the one that currently exists? After all, it seems as if the way we’re living today isn’t working for anyone. Finding such a pathway doesn’t mean compromising in ways that allows injustice to persist, but it’s one that might lead to the common good. When it comes to the church, might this involve moving beyond being the “the church of us vs. them?” This is the point of David Fitch's latest book, which carries this very title: "The Church of Us vs. Them." In this book, the copy of which I read being an uncorrected review copy, Fitch directs his attention primarily at the white evangelical community. He speaks to this community as a white evangelical, and as such invites us to look at the issues and causes that divide. He asks us to consider ways of moving beyond our "causes" to a different way of being a church that might change the status quo and lead to a more just world.

David Fitch is a Christian and Missionary Alliance pastor and the “B. R. Lindner Chair of Evangelical Theology” at Northern Seminary. He is a leading figure in the missional church movement and describes himself as a neo-anabaptist.  He is also the author of a number of books and other resources.

Fitch recognizes that one of the causes of the church’s current problems is the feeling of having lost power with the demise of Christendom. This has led to frustration as the favored place of the church is lost in a more pluralistic and at times more secularized world. Coupled with this loss of power is a tendency to continue living with Christendom habits. We express these habits in the way we talk (we use Christian jargon and expect everyone to understand the meaning). We assume everyone should want to come to church and assume they don't come because they've not found the right one. If only they’d come to our church, they would find what they’re looking for. The problem is, growing numbers simply aren’t looking. Then there is the expectation that everyone will respect Christian leaders. That is, we expect everyone to live as if nothing has changed since the end of the 1950s (and it’s not just the style of music in the church). Since things have changed, church folks get angry and make enemies. Defensiveness sets along with demands for respecting our way of doing things. The world of Christendom is largely gone and isn’t coming back, so it's time to try something different. That means leaving behind Christendom. Part of this leaving behind Christendom involves the recognition of the problems that come with aligning the church with the political powers, especially political powers. For White Evangelicals, that has largely meant being aligned with the Republican Party. There is also the tendency for a Religious Left to become the religious voice of the Democratic Party. They may have different ends, but similar tendencies that often lead to enemy-making.

We seem to know that things are not as they should be. We understand that anger, strife, and hatred are a problem. We just can't seem to get off the train. To get there we'll first need to name the problems and then figure out a way to respond, which will be different from the one we used in prior decades when Christendom reigned. The purpose of this book, according to David Fitch, is to move the church beyond enemy-making. He sees the church as a space that can do this, but that will require major changes to the way we engage the world. This is increasingly difficult in the "Age of Trump." While the polarization we are experiencing in the Age of Trump isn't new, it has become magnified since the 2016 election. Thus, the purpose of the book—finding a different way of engaging the world without capitulating or evading it.

The book is composed of nine chapters. The first chapter names the strife among us. Fitch calls on us to examine our context. What are the issues and the causes of the day? From there we move to the "Enemy-Making Machine." This is a conversation about banners that we rally around. Banners galvanize the people around a cause, and here's the rub: "It's always easier to gather a group around what we're against, because it gets people angry" (p. 33). Having introduced the issue of enemy-making, he introduces our debates over the Bible. While Fitch has signed a statement of faith affirming the inerrancy of the Bible, he speaks here of the "Banner of the 'Inerrant Bible.'" As an alumnus of an institution that was attacked during the "battle for the Bible," I understand the issue pretty well. He is correct that the idea of an "inerrant bible" is more banner than reality (we don't have access to the autographs, which are supposed to be inerrant). Thus, the question is really one of how we read Scripture. It’s not one of biblical authority but the way read Scripture that is the issue before us.

The chapter on the question of whether one is biblical is followed by a chapter in which Fitch lays out his understanding of the Bible. In line with a neo-anabaptist, missional vision, he describes the Bible in terms of God's Grand Drama. It is the "space beyond enemies." Rather than getting up in defending the Bible, he invites us to consider the broad drama that is the Bible, a drama that moves us beyond enemy-making. This leads to the question of calls to make decisions for God and the kingdom. In a series of two chapters, he deals with questions of salvation and conversion, both of which are central concerns for evangelicals. He wants evangelicals to move beyond an escapist vision of salvation to one that leads to an engagement with the realm of God. Conversion, for him, should lead to participating in the reign of God. Here is where life choices come into play. It's not just about getting into heaven; it is about being transformed by one's encounter with God.

These conversations provide the foundation for dealing with the question of making America Christian again. Is this not why so many white evangelicals supported Donald Trump? He promised to give them power, so the nation could become Christian again. Of course, the question is, was the United States ever Christian in the first place? If so, what did it look like? In the end, we come to the question of whether the idea of the Christian nation is simply another banner around which to rally the troops against perceived enemies (like religious liberals, seculars, other religious communities)? In the end, it has nothing to do with being Christian. What we need then is “a new practice of engaging the world for God's justice, a new practice of being the church in the world beyond enemies." (p. 139).

Chapters eight and nine provide Fitch the opportunity to offer his vision of a way forward. Chapter eight is titled "The Local Church is My Politics." I've struggled with the idea of the church as our politics as it has seemed to me to be an evasion of responsibility in the world. It has sounded to me like a call to create a community of witness, that doesn't demand much of us (this is especially true of white churches, no matter their political/theological alignments), but provides a means of escape, leaving the world as it is, filled with injustice. As I read the book, I felt like that this was not Fitch’s intention. He’s not advocating joining forces with a political party, but he does see the church serving as space wherein we work toward that vision of letting go of enemy-making and pursuing a truly common good.  The final chapter offers a vision of the church that lives beyond our divisions. Here the realm of God becomes visible within a community that seeks to overcome the divisions of our age, a church that has given up attempting to recreate Christendom. In other words, he’s asking us whether we’re willing to make space in the church for Jesus to inhabit? There is an appendix in which Fitch seeks to develop the "rudiments of a political theology of presence." This is essentially a follow-up to the final chapter.

While I may have my disagreements at points with points made in the book, and might have questions left unanswered, in part because we might not be at the same place on every issue, I found the book to be a compelling vision for the church, especially white evangelicals (but also white liberal mainliners). There areas where I’m not sure where he stands, especially regarding the place of LGBTQ folks in the church and society. He seems to be welcoming, but I'm not sure if he is affirming. Part of this is due to my being in a different place than he is. I have evangelical roots, but I live within a mainline context that has made affirmation central to our vision of the church. My theology is likely to the left of his, but on the whole, the book spoke to me of a vision that resonates with my own sense of calling. So, I want to encourage people to read the book and consider how we can move beyond being the Church of Us vs. Them that is good at raising the banners of enemy-making, so we can pursue a kingdom vision that includes creating a true common good, without giving place for injustice in the church and in the world. In other words, this is a really good book, that might even resonate with at least some folks on the left, even as he speaks mainly to those on my right.