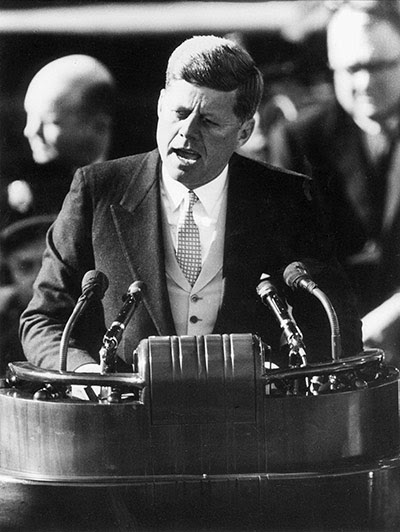 This past week we remembered the 50th anniversary of John F. Kennedy's Inaugural Address.  It was a very different time.  It saw the passing of the torch from one generation to the next, from the generation that came of age in World War I to the that which emerged into public life through the Second World War.  It was a time of great anxiety due to perceived threats from an advancing communism, but it was also a period of growing affluence.  Religion was still "in," and there was a sense that Americans were in this together.  Of course, there were important issues that were getting papered over -- like those that would be identified with the emerging civil rights movement.  We were not yet at war in Southeast Asia, and we were ready to compete with the Soviets in the space race.
On that day in January of 1961, the new President, the youngest ever elected at the time, took the world stage and offered a call to America, a call to join together in a common cause.  The sentence that has come down through time still rings loudly, and yet it would appear that as a nation we are less inclined to heed its call.
On that day President Kennedy issued these words:

In our day, it seems that we are asking a very different question -- "What have you done for me lately?"  We went to war in Afghanistan and then in Iraq, but instead of calling for national sacrifice through increased taxes to pay for this war, we cut taxes, and passed on the debt to a later generation.  That decision is coming back to haunt us.  Even as talk of cutting the deficit is being heard in the Halls of Congress, the buck is being passed on to the States and then to local governments.  While Congress can enable the nation to print money, states, counties, and municipalities must try to balance budgets -- and they must do this without raising taxes, since there is no interest in paying more to keep existing services.  Now, what is interesting is that most Americans want to keep the status quo in terms of services, they just don't want to pay for it.
And when one state, such as Illinois, tries to raise taxes in order to balance its budget, other states seek to capitalize on this fact by trying to woo companies to move elsewhere.  In other words, competition among states is leading to cannibalization of the nation.
So, I come back to the point made fifty years ago -- What Can I do for my country?  And I ask this question from the perspective that my own ultimate allegiance

Henry Neufeld said…
We went to war in Afghanistan and then in Iraq, but instead of calling for national sacrifice through increased taxes to pay for this war, we cut taxes, and passed on the debt to a later generation.

I wanted to say "nails and heads" but with that one stroke you hit so many nails on the head!

Robert Cornwall said…
Yes, if we stayed distracted with visits to the shopping mall, we wouldn't need to worry about making sacrifices! Just ring up the credit card.

As massive as the government debt is, the personal debt is just about as high!
2:43 PM