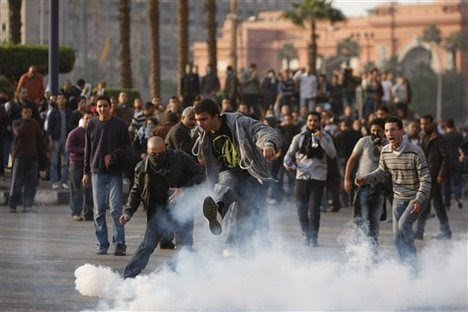 I've been watching the events unfolding in Egypt with a great deal of concern and hope.  Egypt has been a stalwart US ally and "friend of Israel."  This reality has led American American governments to turn a blind eye from the autocratic nature of this regime.  We've stood by allowing Hosni Mubarak to rule without many questions because of the fear of Islamist takeover.  Unfortunately, our willingness to abide secular autocrats has only further alienated the Arab populace and given Islamists the high ground.
After the people of Tunis rose up and pushed out the dictatorial regime there, the populace in Egypt has risen up.  Mubarak has, so far, refused to give up power, though he has fired his cabinet.  Of course, this fools no one.  The problem isn't with the cabinet, but with the one who appoints the cabinet.  Mubarak also is 82 and wanting to pass on power to his son -- but the people and perhaps even the Army isn't happy with this idea.  And so the nation has revolted.  The Army has been called out, but there is a sense that the military is weighing its options.
So what will happen?  The US seems sidelined -- supporting democracy but fearful of chaos in Egypt.  Israel has placed its bets on Mubarak and so is hoping for autocratic rule to continue.  Other Arab countries are also looking at what is happening in Egypt with great concern, because like Egypt these are states ruled by autocratic rulers who allow little freedom to the people.  And, like Egypt the vast majority of their own populace is under the age of 30, and restive.  Islamists have, in the past, exploited this restiveness, for they alone have carried the moral authority to oppose these leaders.  What is interesting in Tunis and in Egypt is that by and large this is not an Islamist driven revolt.  But, if there is a crackdown, it is likely that it will be the Islamists who are able to exploit it.

My hope is that Mubarak steps down and democratic steps are taken.  Egypt is a fairly modern country, that has some diversity -- Predominantly Muslim, but with a significant Christian (Coptic) minority.  I don't know where this will go, but I remain hopeful that freedom will ring for this nation.  Let us not support autocracy out of fear of Islamist take over.  Such fears only feed resentments toward the west.  If we stand for freedom, let us also support it in real ways that honor the aspirations of the Arab people for a better life.  What was it that Jefferson wrote in the Declaration of Independence -- the inalienable right to life, liberty, and the pursuit of happiness.
Email Post
Labels: Egypt Freedom Hosni Mubarak Islam and Democracy Islamist Threat rebellion

But why do you use the word Islamist. It sounds more sinister than Islamic or Moslem, which are the more traditional adjectives.

Do you call Christian members Christianists?
1:01 AM