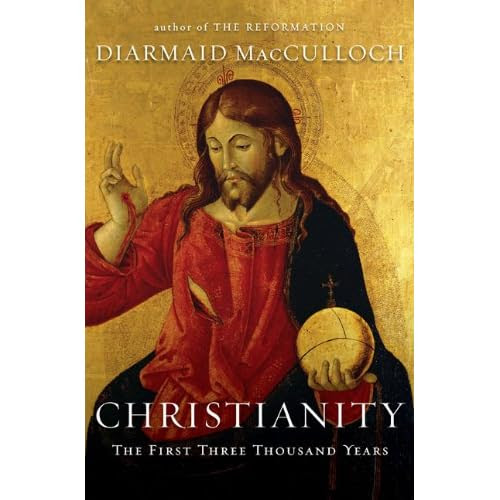 By Diarmaid MacCulloch. New York: Viking, 2010. Xvii + 1161 pages.
You might be wondering about the subtitle of this massive history of Christianity. Maybe you thought that Christianity is around two millenniums old, so where did this extra 1000 years come from? The answer is simple; historian Diarmaid MacCulloch rightly reminds us that Christianity didn’t emerge whole cloth sometime after the year 1 CE. Christianity’s roots go much farther back, than simply the teachings of Jesus, but instead can be traced back to early Jewish history and Greek and Roman history.
Christianity can only be understood if we take into consideration both tributaries, the Hebrew and the Greek. As MacCulloch notes in the introduction:

Within the cluster of beliefs making up Christian faith is an instability which comes from a twofold ancestry. Far from being simply the pristine, innovative teachings of Jesus Christ, it draws on two much more ancient cultural wellsprings, Greece and Israel (p. 2).

As one can see from reading this impressive new history of Christianity, the origins and development of this faith are incredibly complex, a web of ideas and practices that converge in the person of Jesus and then spread out again from him through the teachings and practices of the church that emerges from his first century ministry.
The author of this expansive history of Christianity is Diarmaid MacCulloch, Professor of History of the Church at Oxford and author of several seminal books including an award winning history of the Reformation

and an award-winning biography of the Reformation era Archbishop of Canterbury, Thomas Cranmer

. As one might expect this British heritage gets expressed throughout the book, but that is to be expected. As a historian of the Nonjurors, I was pleased to see this seemingly insignificant group get mentioned in a general history of the church. Others might feel that there are groups that did not make the cut, who are more deserving, but this is the choice of the author.
Despite the fact that Britain may get an outsized share of the story, MacCulloch is incredible fair to the various traditions, east and west, north and south that make up the history of Christianity. As Philip Jenkins makes so clear in his important study of eastern Christianity – The Lost History of Christianity

(Harper One, 2009), we cannot truly understand the history of the church if we don’t include these other stories and simply focus on the Euro-American trajectory. MacCulloch has taken heed of Jenkins’s advice and brings into our purview these other oft forgotten stories.
MacCulloch’s story takes a chronological trajectory, so the various traditions that emerge from the earliest forms of Christianity enter and leave and re-enter the picture. There is theology, politics, and cultural developments present. In the course of the book we encounter persons and groups well-known and unknown to most readers. The narrative is accompanied by a series of maps and plates, mostly in color that give a visual picture to the faith under consideration. One might disagree with the author’s interpretation here or there, or feel that something important has been omitted, but questions like these will be few and far between. Having read Kenneth Scott Latourette's

comprehensive history of the church in seminary, and used it in my own teaching, I can say that this book will prove to be even more valuable than its venerable predecessor.
In closing this review I would like to return to the beginning, because MacCulloch’s choice to start this history with Greece is an important contribution. In some ways this serves a corrective to the belief that in the course of time, the Jewish foundations of Jesus’ original message has been corrupted by the embrace of Greek philosophy by early Christian leaders. It has been suggested that this merger with Greek philosophy undermines the ethical component of Jesus’ message. While there is some truth to this view, MacCulloch reminds us that this Greek component isn’t just a filter, but part of the story. He opens the first chapter, entitled “Greece and Rome” with this sentence:

Why begin in Greece and not in a stable in Bethlehem of Judaea? Because in the beginning was the Word. The Evangelist John’s Gospel narrative of Jesus the Christ has no Christmas stable; it opens with a chant or hymn in which “Word” is a Greek word, logos. The Word, says John, was God, and became flesh and dwelt among us, full of grace and truth. (p. 19).

The author suggests that logos is more than a “word,” it “is the story itself.” And from there, he tells the story of Greece, so that we’re prepared to meet the one whom John declares to be the Word, a Word whose story is told in the lives of those who follow. Greece and Rome provide the foundation for this faith to expand beyond the borders of Judea. Yes, the Jewish component is essential, but Christianity as it became a lived religious force brings both to bear.
This isn’t the type of book that you’ll just sit down and read cover to cover in a couple of sittings. It will take time and require return visits to those parts of the story that intrigue and beckon. The time spent with this book will not be in vain. It will serve to remind modern readers tempted to skip over the intervening years and think that what happens between 100 CE and the 21st Century are of little value, that one cannot truly understand the Christian faith without some sense of the full-orbed nature of this faith. It is a faith that has been influenced by sources Greek, Roman, Hebrew, German, Spanish, Indian and Chinese. It has its share of tears and triumphs. There is much in this history we’d like to forget, but dare not. There is also much to celebrate, often in the stories of people whose names are largely history, people who stayed faithful in difficult times. Their stories appear, alongside those of much better known figures such as Augustine, Aquinas, and Luther.
I leave you with the closing paragraph of this important book, for it is a call to embrace the wonder of this story of a faith tradition embraced by one third of the human population.

Original sin is one of the more plausible concepts within the Western Christian package, corresponding all too accurately to everyday human experience. One great encouragement to sin is an absence of wonder. Even those who see the Christian story as just that – a series of stories – may find sanity in the experience of wonder: the ability to listen and contemplate. It would be very surprising if this religion, so youthful, yet so varied in its historical experience, hand now revealed all its secrets. (p. 1016).