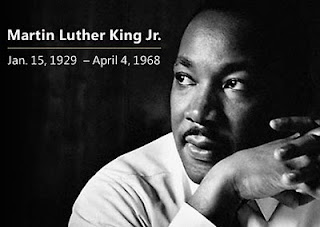 This weekend we pause to remember the birth of one of America's great prophets, a man who spoke truth to power and pushed the American conscience.  He spoke out against discrimination and segregation.  He spoke out against injustice and poverty.  He spoke out against a war that drained the finances and the spirit of the American people. I was only ten when Martin Luther King was assassinated.  I can't say that I had any real awareness of what was happening in the world at that time, living as I did in a fairly sheltered world of small town America.  But over time I can to understand the message that Dr. King and other activists brought to the American people, a message that we must still hear.
Last night my congregation hosted for the Michigan Disciples Black Ministers Caucus their annual Martin Luther King service.  It really was a great event, with great preaching and great music.  But it was also an opportunity to build relationships across ethnic boundaries -- something we still need to address.
This morning as I pondered what to share I went looking for quotes from Dr. King and came across this excerpt from his Letter from the Birmingham Jail

.  I think this might be a statement worth reflecting upon.  Is there a place for an extremism of love and justice?  And what does that mean?   Consider therefore this statement:

David said…
I was there in spirit. That man spoke not extreme truth. Every person on earth surely has the capacity to resonate with nearly every stand he publicly took.

We watched the 3rd and final episode of a recorded PBS God in America special tonight. It had an excellent storyline on Martin Luther King. Overall, a very good program (John could find useful it for his religion/ government class to pass around).

David said…
"And don't let anybody make you think that God chose America as his divine messianic force to be a sort of policeman of the whole world.

God has a way of standing before the nations with judgment, and seems that I can hear God saying to America, "You are too arrogant, and if you don't change your ways, I will rise up and break the backbone of your power!"

Thanks, I will look into the video. I already went to the PBS website and listened to a fascinating nterview with DR. King from the late '50's about the "New Negro". There was a an old white Southern judge interviewed at the same time and his words were the most surprising, and encouraging.