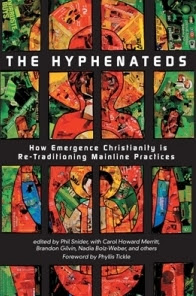 It’s no secret that Mainline Protestantism has experienced significant decline over the past fifty years.  If you’ve been to a typical Mainline church you’ll likely notice that those present are relatively order than the general population.  Many pundits have put this branch of the Christian community on a death watch.  Although the theology and social views (especially on issues such as homosexuality) of this brand of Christianity would seem to position it well to attract younger generations (GenX and Millennials), such has not been the case.   Despite attempts to contemporize worship and become less traditional, these churches (my church) continue to struggle.

Despite the apparent downward trend, there are signs of hope springing up here and there.   This doesn’t mean that the present rate of decline won’t continue for the foreseeable future (with such a large percentage of membership being over 65 this is inevitable), but not all is gloom and doom.  There are examples of new and interesting forms of church life emerging.  These forms of Christian community track with the theology and even some of the traditions of existing Mainline Christianity, but they seem to be metamorphosing into new forms and expressions that may in the end look very different from what we know as Mainline Protestantism today.

Phil Snider, a Disciples of Christ pastor, with Emergent inclinations has gathered together a set of essays written by other Emergent-inclined Mainliners.  The Emergent Church movement had its birth among younger evangelicals who found the theological and social constraints of evangelicalism problematic.  As they “moved left,” they began to encounter younger Mainline Protestants who also were on a journey toward something new and engaging.  They are not, Snider insists, “abandoning the traditions that have shaped them; rather they are attempting to faithfully appropriate their beloved traditions in new and innovative ways.”  They are, he suggests, seeking to retradition the church so that new life can emerge (p. xvi) As a result of these conversations a new breed of Mainliner developed – a hyphenated Emergent-Mainliner.   Thus we have Presby-mergents, Luther-mergents, [D]mergents, Angli-mergents, and more.
The book, which carries a foreword by Phyllis Tickle and an afterword from Doug Pagitt, contains essays from thirteen Emergent Mainliners.   In their essays they express appreciation for their varied traditions, hopes for a new way of being church, anger at the way church is practiced, and critique.   Some of the writers, including Carol Howard Merritt and Nadia Bolz-Weber are widely known, while other names may be new to many readers.  There will be essays that one finds resonating, and others that do not.  Each reader may respond differently to the perspective of a given author.

In my reading I found several of the essays especially poignant.  The first essay of the book is written by Bolz-Weber, an Emergent Lutheran pasturing in Denver, and carries the title “innovating with integrity.”  She expresses the desire of many Mainliners who wish to push boundaries, to innovate, but wish to remain true to the core values and theologies of their tradition.  She writes:

The core holds the history, the tradition, and the money.  It includes the ecclesial structures, the traditional churches that have existed for generations . . . The innovative edges then are emerging churches, multicultural ministries, and any ministry being established outside the structure of the ELCA, especially by seminaries and laity in response to their context.  (p. 5)

The question that flows from this continuum of core and innovative edge is whether there is sufficient respect at both ends, but especially at the core, for the other.  Are the voices of the Millennial Generation, for instance, being heard?  In a similar fashion, Stephanie Sellers, an Episcopalian, raises the question of how to balance freedom and order in a church that has valued tradition and order.  Going forward, however, how does it allow sufficient freedom to contextualize itself so as to be present in and with a new generation?

Sometimes structures, which have served church and clergy well, have conspired to shut down innovation.  Elaine Heath, a United Methodist, notes that the principles of guaranteed appointments have made it difficult for Methodists to engage in the kind of bi-vocational ministries that allow for a more incarnational presence.   You can serve as a bi-vocational pastor, but such an appointment does not allow one to have the same voting privileges as full-time clergy (ordained elders), or to serve as a district superintendent or bishop.

So, if you are an innovative, missional, creative, bivocational local pastor who is good at planting and leading emerging faith communities on the margins of society, you will never become a district superintendent, never become a bishop, and never be able to offer to the ailing UMC at large the ecclesiological medicine it needs in order to become healthy again. (p. 33)

There is in this vein at times deep anger at the way the structures are laid out and how they may conspire against innovation and even radical Christianity – as seen in Christopher Rodkey’s “Satan in the Suburbs,” which offers what seemed to me to be a diatribe against the church and its use of ordination to control.

Some of the essays, such as Carol Howard Merritt’s explore the cultural terrain of emergent/mainline ministry, while Matt Gallion, a graduate student in religious studies explores postmodern philosophy, which has been a key component of the emergent conversation.  Gallion calls on emergent Mainliners to face the truth that if it is to “radically enact or incarnate transformative change – as it purportedly desires to do – then it will have to face its overwhelming similarities to classical liberalism and move beyond them” (p. 89).

These essays that I’ve highlighted offer a taste of what can be found in this very important book for the Mainline Protestant church.    I didn’t agree everything I read and I didn’t find equal value in every essay.  That is to be expected from a collection of essays.  However, this is, as Doug Pagitt suggests, a family conversation.  The idea of being hyphenated reminds us that there is often discomfort in bringing together different families, to form a new family identity.   Pagitt writes of the feeling among many Mainliners attracted to the Emergent Conversation – their family of origin is too important to let go of the name.

This is, in my opinion, where the hyphenateds of the emerging church world find themselves.  They recognize they are in a new relationship, but they also know where they came from.  They want to be fully in the emerging family, but as a product of another family.  (p. 156).

How all of this will work out is unknown.  Will one of the family names get dropped over time, or will this new hyphenated identity enrich the broader Christian conversation?  As Matt Gallion notes, this new identity must be more than simply repackaging traditional liberalism.  It can’t be another gimmick to grow a dying church.  It must contribute something of value to the realm of God.

One thing that can be said for the convergence of the emergent church movement, which has evangelical origins, and the Mainline, is that the ethnic and gender representation has been broadened.   One of the criticisms of many Emergent gatherings is that the stage is dominated by white males.  In this conversation, a significant portion of the contributors are women (six of thirteen), some of whom are persons of color.

As a Mainline Pastor who has been engaged in this conversation, though I am of a generation older than most of the participants, I am grateful to Phil Snider and to Chalice Press, for making this volume available to the church.  May it stir a conversation that can lead to transformation of the church so that it becomes flexible and innovative enough to engage the world that exists and will exist, even as it seeks to be true to its core.