Religious Speech and the Public Sphere 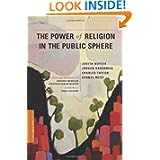 If people of faith are to be present in the public sphere and speak in a way that can move the political discussion, but do so in a way that recognizes and respects the plurality of positions present, how should such speech be conducted?  That is, is it appropriate to enact legislation that is rooted in religious thought or must it be translated?

In a book of essays recommended to me by my friend Saeed Khan, a Muslim scholar, political theorist Jurgen Habermas, engaging with the work of John Rawls, suggests that religious language is permissible in the public sphere, but religious people must recognize that "the potential truth contents of religious utterances must be translated into a generally accessible language before they can find their way onto the agendas of parliaments, courts or administrative bodies and influence their decisions."  (Habermas, "The Political," in The Power of Religion in the Public Sphere (A Columbia / SSRC Book)

He goes on to write:

Instead of subjecting all citizens to the imposition of cleansing their public comments and opinions of religious rhetoric, an institutional filter should be established between informal communication in the public arena and formal deliberations of political bodies that yield to collectively binding decisions.  This proposal achieves the liberal goal of ensuring that all legally enforceable and publicly sanctioned decisions can be formulated and justified  in a universally accessible language without having to restrict the polyphonic diversity of public voices at its very source.  To be sure, the "monolingual" contributions of religious citizens then depend on the translational efforts of cooperative fellow citizens if they are not to fall on deaf ears. (p. 26).

My question is -- what do you think of Habermas's analysis?  Is it possible for democracies to function in a way that allows for religious rhetoric, but does so in a way that is more universally applicable to all citizens?   And to make this possible are we as people of faith comfortable with a state that is neutral toward competing world views?
Email Post
Labels: Jurgen Habermas Legal issues Political theology Public Faith religion and democracy

Steve Kindle said…
Bob, it might be helpful if you shared some examples, should there be any, from Habermas. For me, this is quite vague, yet intriguing.
2:09 PM

Robert Cornwall said…
Steve, one example that Habermas lifts up is the argument of human dignity on the basis of the idea of "creation in the image of God." It offers important information for our conversation -- that we have value because we are the image of God -- but a legal definition of human dignity needs to have a non-religious public face, so that it can embraced by the person who shares the concept, just not the justification. I'll work on more possibilities!
2:40 PM