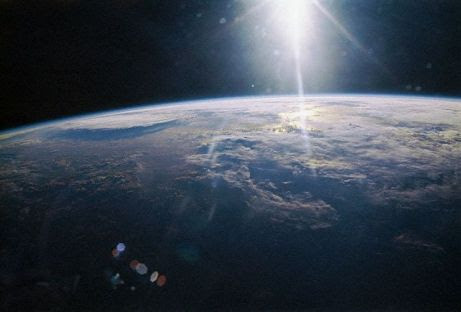 “The end of something is better than its beginning.” (Ecclesiastes 7:8 Common English Bible)

I thought you’d want to hear this word from Ecclesiastes, since we’re moving into a new year.  Beginnings are important, but endings are even more important.  A few years ago the Lions won all their preseason games and everyone expected good things, and then they lost the next sixteen in a row.  This year, the Lions had an up and down season, but they ended up in the playoffs – that was a much better conclusion.

Each of us has a story of beginnings to tell, what we don’t know is how things will turn out.   My own life began on March 3, 1958 in Los Angeles.   Five years later, I began my formal schooling as kindergartner in Mt. Shasta.  From then on,  for the next seventeen Septembers, I would begin a new school year.  After taking off two Septembers, I restarted school in January 1982, when I began my seminary career.  Of course I didn’t just start school, I also had other moments of new beginnings, such as the that Summer day in July 1983when Cheryl and I were married.  There was another day of beginnings in June of 1985, when I was ordained.  Then, there was that day in April of 1990, when I became a parent.   These are just some of the beginnings of my life experiences.  I’ve had some endings, but there are still many of these beginnings that have yet to reach an ending.

Genesis 1 begins with the words, “In the beginning,” a phrase that is picked up  by the Gospel John, who declares:

The Gospel of Mark starts with the words: “The beginning of the good news of Jesus Christ, the Son of God.”  And in Revelation Jesus declares:  “I am the Alpha and the Omega, the Beginning and the End” (Rev. 21:6), while Paul writes:

So then, if anyone is in Christ, that person is part of the new creation.  The old things have gone away, and look, new things have arrived! (2 Corinthians 5:17 CEB)

A time of beginnings, whether new or not, is a time when we begin with a clean slate.  Whatever happened in the past, for good of for bad, is in the past.  Now, however, is the time to move into the future, embracing all the opportunities the future presents.   And if God promises to be with us in the beginning, then surely we can expect God to be with us until the end of all things.  Although the end is better than the beginning, the writer of Ecclesiastes cautions us to be patient.

Before we get too focused on the end of things, perhaps we could return to the beginning of the story – with the opening lines of Genesis 1.

Did the universe emerge fully formed in a single moment?  Or is creation a process that is even now unfolding?  Is God finished with the work of creation and living in retirement?  Or is God still at work bringing order out of chaos and bringing light into the darkness?

Since I’m not a Deist, I’ll cast my lot with the God who is still at work bringing order out of chaos and light into the darkness.  Because we live in a world where both chaos and darkness are still present, I find hope in the promise that God is still at work.  What is, is not the final word.

We have experienced the Alpha, but not the Omega.

If we step back to look at the full picture of creation – from beginning to end – perhaps we can see why God declares the creation to be good.  It is full of potential.  But, as we look closer we see that things are not yet complete.  Disorder is still present and darkness remains.  Where is God in the midst of this disorder and chaos?  Is God too weak to bring order to creation?  Or is the power of God expressed differently than we’ve often been led to believe?

May we say that God is still at work, but not as the omnipotent miracle worker, who reaches in and fixes things when they're broke, but the one who comes to us revealed in and through the cross of Jesus?

And where do we fit in the story?  If you continue reading Genesis 1, you will come to the creation of humanity, and you will hear God give humanity stewardship over the creation.  In doing this, God entrusts us with co-responsibility for this creation.  Mixed into this story, however, is the continued presence of chaos and darkness.  The biblical story gives us two words – God’s creation is good, but evil is real and it is present in our midst.  As we read on we discover that humans can get caught upon this darkness, but we also hear the promise that God has made provision in Christ to bring us back into the light.  This is the good news – the word of liberation.

As we ponder this calling to join with God in bringing order and light into the world, may we also remember that even as we seek to respond to this invitation, we too need light and order in our own lives.  We are not free from complicity in the chaos and darkness of this life, for the ending is not yet upon us.

Perhaps we can hear a word of guidance in Mark’s story of Jesus’ baptism by John.  In this account, Jesus joins with the throngs of people coming to John to be baptized, as a sign that they desire to change their hearts and lives.  Jesus submits to this baptism, identifying himself with the sinners of this world.  But, as Jesus emerges from the waters of the Jordan, the heavens open, the Spirit of God descends like a dove upon Jesus, and then a voice from heaven declares: “You are my Son; whom I dearly love; in you I find happiness.”

Although the end may be better than the beginning, may this be a day of New Beginnings.

Anonymous said…
The story of the Garden of Eden is an Exodus story. It is the first Exodus story and the story that arches over and encompasses and undergirds the rest of the Bible. Like any Exodus story, it is a story of God providing deliverance from bondage and the ensuing roundabout journey into the freedom of the wilderness where we have a continuous opportunity to discover God and to experience God and to learn how to be in relationship with God and through that relationship be resurrected and transformed into the here-and-now Kingdom of God.

God created this chaotic universe because God wanted free-willed life. Without the power to say “no”, there is no free-will. Within the confines of the Garden of Eden story; if Adam and Eve do not defy God, if they do not say “no” to the limitations imposed by God, they will not have free-will and the Garden of Eden will not be a utopia, it will become a zoo, a gilded cage – a life without freedom, a life without hope, a life without a future – a place of bondage. Instead, by defying God, the Garden of Eden becomes an incubator and a proving ground. Being driven from the Garden of Eden into a stark wilderness is not a punishment, it is an Exodus. Like any Exodus, it is a roundabout journey away from bondage (and a place to which God never wants us to return) into the freedom of the wilderness where Adam and Eve and all the people of the Bible and all of us are to discover God and learn how to be in relationship with God and, ultimately, how to be – here and now - a community of love and grace, of equality and inclusion, of healing and justice as restoration – how to be the Kingdom of God. The story of the Garden of Eden is not a story of failure, it is a story of success for God and us; it is not a story of condemnation, it is a story of affirmation. Free-will would be meaningless if God did not expect to be surprised by us.

John said…
Exactly what I would have said if I were so eloquent.
10:13 AM