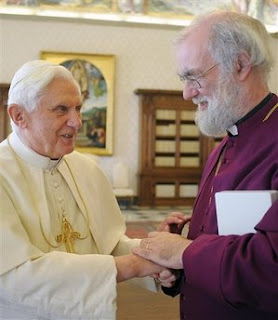 Don't let the picture mislead you -- things aren't all that congenial between Rome and Canterbury.  There's a lot of tension and a lot of concern about the relationship.  Being a former Episcopalian who is in conversation with local Catholics, many of whom are less than enchanted with the conservative direction in that Church, I'm intrigued by the commentary offered by Peter Williams, a historian of American religion.  He draws our attention to the Catholic Church's decision to set up an American home for Traditionalist Episcopalians who wish to leave that church and migrate over to the Catholic Church.  This is, as Williams suggests a poke in the eye of the Anglican community.  The point in the end, it seems, is that even as the Roman Church is drifting further right and the Anglican community in North America and Great Britain to the left, the opportunity for meaningful dialog is becoming increasingly difficult.
So what is the future of this conversation?  What is the future for these churches?
*********************

Rome Pokes Canterbury in the Eye—Again

On January 1, the New York Times reported that the Roman Catholic Church had established a “Personal Ordinariate of the Chair of Saint Peter” which will function as an ecclesiastical home for members of the Episcopal Church who wish to transfer their allegiance without giving up the liturgies of the Book of Common Prayer and a married (though all-male) priesthood. Its bishop will be based in Houston, traditionally a hotbed of Anglican unrest in the wake of “the current unpleasantness” over the ordination of gay clergy and bishops and a growing hospitality towards gay marriage. A similar offer to British Anglicans--“the Personal Ordinariate of Our Lady of Walsingham”--announced last year drew a rather small number of converts, as well as an unamused response from Church of England officials. These arrangements are similar to those negotiated in previous centuries with various Eastern-rite churches, known collectively as the Unia, many members of which returned to Eastern Orthodoxy after their married clergy met with a hostile reception upon arrival in the United States.
From Henry VIII’s break with Rome until the nineteenth century, Anglican or Roman allegiance carried with it heavy political implications on both sides of the Atlantic. These implications had receded by the time of the Oxford Movement of the 1830s, which signaled a new Anglican sympathy for such Roman emphases as sacramental piety and the apostolic succession. In 1852 Levi Silliman Ives, the Episcopal bishop of North Carolina, resigned to become a Roman Catholic, and a number of other English and American Anglicans with Anglo-Catholic proclivities followed suit. Any chances of serious ecumenical discourse, however, were quashed by Pope Leo XIII’s 1896 bull Apostolicae Curae, which declared Anglican orders “absolutely null and utterly void.”
For decades the two communions kept their distance, reinforced both by social as well as theological barriers. By the 1960s, a number of forces had converged to reduce these barriers. Pope John XXIII convened the ecumenical council Vatican II, which emphasized commonalities with other Christian communions. American Catholic laity, exemplified in John F. Kennedy, now possessed enhanced economic and cultural power that put them on a social level comparable with the Protestant “establishment.”
Since Vatican II, both the American Anglican and Roman Catholic communities have split into complex groups of internal factions. The support shown by the Episcopal Church’s leadership for civil rights and other reform movements undercut that denomination’s reputation as a bulwark of the civic power structure, while simultaneously alienating many members who had valued its traditional conservatism. Episcopalians, traditionally divided into Low Church (evangelical), High Church (Anglo-Catholic) and Broad Church (ecumenical liberal), have experienced attrition from the first two groupings over issues of Book of Common Prayer revision and women’s ordination and, more recently, the acceptance of gay clergy, bishops, and marriage. Evangelical discontents have aligned themselves with Anglican provinces in Africa and Latin America, or with Robert Duncan—sometime bishop of Pittsburgh—and his homegrown Anglican Church in North America. Anglo-Catholics, whose movement to Rome has taken place gradually, are presumably the group most open to the latest papal initiative.
Migration has also been steadily taking place in the opposite direction. Some say that the Episcopal Church might be out of business were it not for the steady, quiet stream of former Roman Catholics joining its ranks. Only continuing Hispanic immigration has kept United States Catholic numbers steady. Many American Catholics remain loyal for familial and cultural reasons, but selectively ignore papal teaching they find irrelevant. Progressive Catholics continue to exist, but with diminished visibility. An influx of younger and foreign clergy reinforces the conservative inclinations of an episcopate appointed exclusively by traditionalist popes, creating an even greater chasm between laity and leadership--the same sort of chasm, ironically, created by the leftward movement of Episcopal clergy and bishops.
Both communities, which have historically seen themselves as “churches”--inclusive, broad-based entities--now find themselves trying to contain major losses brought about by divisiveness among internal factions. In the meantime, the ethos of each community’s leadership--inclusive, democratic, and progressive Anglicans versus hierarchical, traditionalist Catholics--makes the possibility of continued meaningful ecumenical dialogue doubtful at any but the grassroots level. The ecumenical commission ARCIC (Anglican-Roman Catholic International Commission), launched in 1967, has encountered increasingly greater frustrations as newer questions of gender and sexual orientation have joined traditional issues such as papal supremacy as stumbling-blocks to enhanced confessional unity. More pokes in the eye may be inevitable.

----------
In this month’s Religion & Culture Web Forum Jonathan Wyn Schofer explores both how late ancient rabbinic narratives understand human vulnerability in relation to the environment, and the ethical instruction inspired by this understanding. Schofer proposes that "contemporary environmental ethics can learn much from considering these perhaps exotic rituals and stories," which "portray people as entrenched in natural processes."
----------