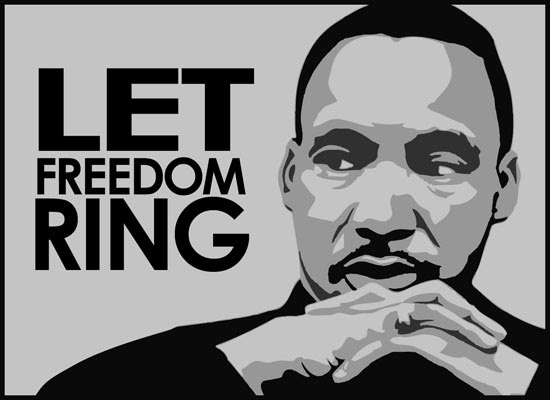 Martin Luther King Jr. has become an iconic figure in American life.  An assassination will do that for a person. It is convenient for many of us to have Dr. King on our side. Where possible we pick out quotes from speeches that support our causes and while setting aside less convenient words. Thus, we lift up his “I have a Dream” speech and cast aside his strongly worded denunciation of the Vietnam War. But his vision was too broad to be limited to that one word, as inspiring as it may be.
The vision that Dr. King sought to share with the American people was rooted in his commitment to pursue not only civil rights for African Americans but justice for all people. His conscience was raised by the plight of African Americans living in the segregated South, where lynchings and Jim Crow laws sought to keep a particular group of people in their places. This conscience was also formed by his engagement with the teachings of his faith, especially the biblical prophets and Jesus, who spoke clearly about God’s commitment to justice. The prophet Amos, for example, contrasted concern for piety and ritual with a concern for justice, declaring: “let justice roll down like waters, and righteousness like an ever flowing stream” (Amos 5:24 Common English Bible).
Dr. King was inspired and empowered by a deep faith in God, a faith that reached into the message of the Hebrew prophets and that of Jesus. He sought to offer a vision of justice that was inclusive and liberating.  He understood that one’s faith, if it is to be truly lived, should lead to concern for justice – not just for some, but for all.
In his “Letter from the Birmingham Jail,” which he wrote to Moderate White Clergy, he pushed back against those who had criticized him for pushing too hard for social change.  They suggested he focus on spiritual things, rather than social justice.  It is a rather long letter that covers much ground, but in it he spoke of laws that were just and those that were unjust, and called for people of faith to recognize that the teachings of their faiths had made it clear that God was on the side of justice.

How does one determine whether a law is just or unjust? A just law is a man made code that squares with the moral law or the law of God. An unjust law is a code that is out of harmony with the moral law. To put it in the terms of St. Thomas Aquinas: An unjust law is a human law that is not rooted in eternal law and natural law. Any law that uplifts human personality is just. Any law that degrades human personality is unjust. All segregation statutes are unjust because segregation distorts the soul and damages the personality. It gives the segregator a false sense of superiority and the segregated a false sense of inferiority. Segregation, to use the terminology of the Jewish philosopher Martin Buber, substitutes an "I it" relationship for an "I thou" relationship and ends up relegating persons to the status of things. Hence segregation is not only politically, economically and sociologically unsound, it is morally wrong and sinful. Paul Tillich has said that sin is separation. Is not segregation an existential expression of man's tragic separation, his awful estrangement, his terrible sinfulness? Thus it is that I can urge men to obey the 1954 decision of the Supreme Court, for it is morally right; and I can urge them to disobey segregation ordinances, for they are morally wrong.

In his famed “I have a Dream” speech, King appealed to the words of the Declaration of Independence, and pushed beyond the Founders narrow vision that limited liberty and freedom to white males and applied them to all humans.  He stood with others, including those who fought for the right of women to vote and have their own legal rights, in drawing out the true implications of these words:  “We hold these truths to be self-evident, that all men are created equal, that they are endowed by their Creator with certain unalienable Rights, that among these are Life, Liberty and the pursuit of Happiness.”
As we remember Dr. King this weekend, let us take hold of his dream of a world where character – not color – determine one’s future, and let us not forget that we are not there yet. And let us not forget that quest for justice remains with us.
That quest takes on many different forms.  At the time of his assassination, he was deeply involved in the quest to end poverty in America.  He was also involved in the effort to end the Vietnam War, a commitment that led to conflicts with some of his allies in the Civil Right’s cause.  In a sermon given at the Riverside Church in New York City that challenged America’s involvement in a deeply unpopular war, King explained how his journey had taken him from Montgomery to that night at the Riverside Church:

And finally, as I try to explain for you and for myself the road that leads from Montgomery to this place I would have offered all that was most valid if I simply said that I must be true to my conviction that I share with all men the calling to be a son of the living God.  Beyond the calling of race or nation or creed is this vocation of sonship and brotherhood, and because I believe that the Father is deeply concerned especially for his suffering and helpless and outcast children, I come tonight to speak for them.

We can recognize the power of these words, which define Dr. King’s vision of God’s calling on him and us to speak out for those who suffer, are helpless, and are outcasts.  I would only note that in the intervening years we have become more sensitive to the way in which words can exclude, and in this case it is women whose voices need to be added to the full human community.  Thus, we can hear in this a call for us as God’s children to embrace one another and pursue justice for all.  We may do so fitfully and even reluctantly at times, and yet it is a call worthy of embracing.

David said…
If you weren't around, here's a SFW image of the kind of bravery it took to march back then-