Religion: Is it Private or Public? 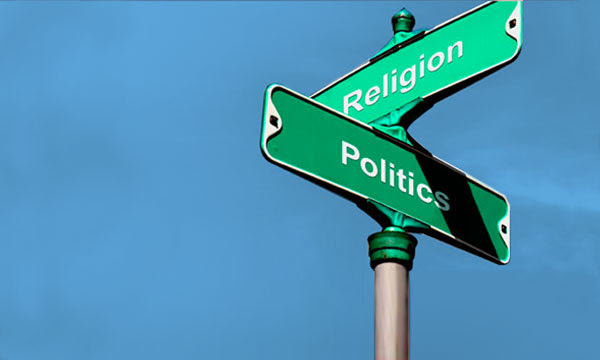 Religion is very personal.  It is an expression of one’s understanding of reality and one’s relationship to that reality.  Each of us is different, and therefore the way we understand this reality will be different.  I am a Christian, and therefore, at least in theory, my view of the world is defined by Jesus -- who I understand to be God’s Word revealed in human life – whose teachings and whose life offers guidance as to how God views the world and wishes for me to be engaged in the world God has created.    If I were Muslim or Jewish or Hindu or Buddhist, my understanding of God and the world would reflect those teachings, and even with the Christian community there is great variety of thought.  Yes, religion is deeply personal.

Although faith is deeply personal, is it therefore private?  That is, should I keep my faith hidden in my house or place of worship?  Although I do believe in the separation of church and state, I’m not sure we can truly separate the secular realm from the sacred realm without doing violence to both.

We live in a very diverse and pluralistic context, which in my mind necessitates my respect for these differences.  It’s not just a matter of tolerance, it is a matter of trying to understand the other and welcome them into the conversation about the public good.

One of the problems with limiting religion and faith to the private realm is that it essentially eliminates God from my life.  I realize that too often even people of deep faith live as if God does not exist, what some would call “practical atheists,” but is the way it should be?  But if religion takes on a public face, how do we keep it from becoming merely a tool of the culture?  A public expression of faith must not degenerate into using God to bless our agendas, as Constantine is said to have done when he had a Christian symbol painted on the shields of his troops as he went into battle.

So, if religion is to have a public face, what should that face look like?  As we seek to find an answer to this question, we must start, as I noted earlier, with the recognition that this is a culturally, ethnically, politically, and religiously diverse nation (and local community).  If I am to bring my faith into the public realm, as I often do, I must recognize and respect this diversity.  I may not agree with everything my neighbor believes or practices, but unless those beliefs and practices are harmful to the people who live in this society, then I must respect their freedom to practice and believe as they please.  That is, I believe, a constitutionally protected right of every American.

The problem that faces us, that faces us, is that too often those who seek to bring their faith into the public sphere do so self-righteously, as if they have the truth and the state should affirm and enact their understanding of the truth.  There is, in essence, a rather triumphalist understanding of one’s faith, which leads to a rather coercive and oppressive expression of one’s faith.  This reality has led some to advocate neutralizing the religious voice from the public square, but how does this occur without violence?  The cure for coercion is not coercion, but in my mind, being more attuned to the teachings of one’s faith.  As a Christian, I look to Jesus, who offered a non-coercive vision of public faith, one that is activist, but also humble and focused on serving others, guided by the principles of Love of God and love of neighbor.

If, as I believe, we cannot so easily separate secular and sacred spheres of life, and if religion is to participate in the conversation in a non-coercive and humble manner, what will this look like?  That is the question I would love to consider with the community of Troy and beyond.

Anonymous said…
The self-righteousness is a problem. It stems from linking your policy positions with God. If God validates your politics, then your views take on an absolute quality, and people who disagree with you are opposing God. Then it becomes easy to be self-righteous. It is present on the religious left as much as the religious right. The only cure is humility, being modest in speaking, and always being willing to listen and learn from the other side. ~ Chris
10:24 AM

David said…
Your comments remind me that I didn't even realize http://en.wikipedia.org/wiki/Jon_Huntsman,_Jr.
was a Mormon until recently. I think this may help boost him, along with his openness to his adopted children's original culture. That's humility.

So is working for the Obama administration.

Most Americans, even Republicans, should value separation of religion form politics.

I predict Huntsman will be the final Republican candidate, in part, due to this.
8:03 PM

David said…
"I was raised a Mormon, Mary Kaye was raised Episcopalian, our kids have gone to Catholic school, I went to a Lutheran school growing up in Los Angeles. I have an adopted daughter from India who has a very distinct Hindu tradition, one that we would celebrate during Diwali. So you kind of bind all this together."
8:25 PM

David said…
Now I remember why I didn't dislike this guy too much- Huntsman professes a firm belief in science, rejecting the notion that faith and evolution are mutually exclusive. In response to Rick Perry's creationist world view,[116] Huntsman warned that the Republicans should not become the "anti-science" party, and stated: "To be clear. I believe in evolution and trust scientists on global warming. Call me crazy."
8:27 PM

Glenn said…
Surprisingly Gary is mistaken on this issue. Things making themselves is not a prerequisite for The Theory of Evolution. Evolution says absolutely nothing, zero, zilch, nada about the origins of life. However, it does quite convincingly address how lifeforms changed after they appeared.
2:56 PM

And Gary would say that while God had the power to use evolutionary mechanisms in creation, the fact is that God did not do so; and it is sinful to theorize that God that did something which God did not do.

Of course, Gary would also accuse me of twisting his words.
3:17 PM

Gary said…
Living things came from somewhere. Either they were made by someone or something outside of themselves, or they made themselves. Is there another option?

Things that have DNA have some latitude in how they are. In human DNA you have different skin colors, differnt hair colors, different heights, weights, etc. But DNA does not offer the latitude for a reptile to "evolve" into a bird, or for an ape to evolve into a human. In order for evolution to be true, the way evolutionists mean for it to be true, changes need to happen that DNA does not allow. And so far, no scientific evidence has been found that would prove the evolutionist's case.
10:20 AM