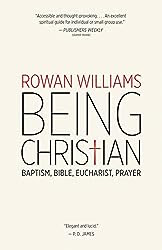 What does it mean to be a Christian?  There may be as many answers to that question as there are Christians.  In fact, many outside the Christian community may want to weigh in as well.  Suffice it to say that there is no one answer to the question.  Any attempt at answering the question will have a degree of personal spin added to it.  There are, however, persons of intellect and thoughtfulness that can serve as guides to exploring the faith we call Christian.  Some of these persons have written long and involved tomes, books that require much concentration and time to absorb.  Others have chosen to go a different route.  They have offered up brief responses, but responses that can serve us all quite well.  Among those attempting to do this is Rowan Williams, the former Archbishop of Canterbury.

Rowan Williams presided over the Anglican Communion – a sprawling confederation of nation churches or provinces that spans the globe – at a time of great change.  While the old heartland of the communion (Great Britain, the United States, Canada, and Australia) have seen the churches in those lands go into decline, in the developing world the Anglican church is on the rise.  The churches in former colonies have begun to exert their influence, and that has proven difficult, especially when it comes to social issues like homosexuality.  Williams struggled with this responsibility, but he did so with calmness and a deep theological base.  Now the Master of Magdalene College, Cambridge, Rowan Williams has written a brief exposition of the Christian faith, focusing our attention on four essentials: Baptism, the Bible, the Eucharist, and Prayer.  The four chapters are based on talks given at Canterbury Cathedral during Holy Week.

These four essentials serve to mark one as a Christian.  One enters the fold through baptism.  One listens for God’s voice in the Bible (both read and heard).  One continues to grow in faith at the Eucharistic Table.  One shares in conversation with God through prayer.   As we explore these four essentials, we are being asked to consider what “these activities tell us about the essence of Christian life, and what kind of people we might hope to become in a community where these things are done” (pp. vii – viii).  Although each of these elements carries important theological truths, they aren’t first of all doctrines.  They are practices through which we encounter the living God.

Williams begins with Baptism, the sacrament by which people are brought into the church.  But this act of being dipped into or sprinkled with water is more than simply a rite of passage.  It is, Williams suggests, the means through which our humanity is restored.  It doesn’t mark us off as different from or better than others.  It does, however, initiate a difficult and dangerous path – or at least an adventurous one.   In the course of being baptized one is brought “into the neighbourhood of other Christians.”  He notes that this can be bad news, for “other Christians can be so difficult!” (p. 10).  Baptism, therefore, brings us into a community where we grow into Christ, who is prophet, priest, and king.  William’s definitions of these three roles are intriguing, especially that of king.  Prophets speak for God; priests “build bridges between God and humanity.”  A king speaks to God on behalf of the people (a priestly role), but the king has “the freedom to shape the law and the justice of his society.”  Therefore, “our ‘royal’ calling is about how we freely engage in shaping our lives and our human environment in the direction of God’s justice” (pp. 15-16).  To be baptized is to be drawn into Jesus’ work of restoration – as well as being restored.

To say that the Bible is one of the four essentials is not to say that one must read the Bible flatly (wooden literalism).  Williams is a good theologian who is able to read the Bible critically.  But, the Bible is an essential because it is in the words of scripture that that people expect to hear a word from God.  This word comes in different forms and thus must be interpreted.   More importantly, Williams reminds us that we must begin with the big picture – the whole story.  There is history and history matters, but that’s not the focus of this book.  Indeed, he writes:

If we hang our faith on the absolute historical accuracy of Scripture in every detail, we risk making Scripture a sort of “magic” book that turns up the right answers to all sorts of rather irrelevant questions instead of being a book that gives us, in the wonderful words of the Coronation service, “the lively oracles of God” (pp. 32-33).

And we read these oracles with Christ at the center and we read them together.  Williams offers a helpful reminder that the idea that one had one’s own Bible is a rather new phenomenon.  In earlier centuries one listened to the Word read – and even then perhaps only portions as only the largest churches would have had a full Bible at their disposal.  Still, it is in this context that God is heard.

As for the Eucharist – the sharing in the Lord’s Table – Williams speaks of it as a place of hospitality, where Jesus opens us up to acts of hospitality.  This Table is a place of Welcome (an important reminder when the Table is often a place of exclusion).  Interestingly he states that the Eucharist makes no sense if one does not believe in the Resurrection.  If there is no resurrection, the Table is a mere memorial service.  It becomes a place of sadness rather than joy.  While it is Jesus who invites us, we have the opportunity to invite others – making “our lives and our communities places of welcome for those most deeply in need of solidarity, of fellowship” (p. 46).  There is much to be explored here in the brevity of the exposition – there is welcome, thanksgiving, grace, and transformation.  Yes, the Eucharist is so much more than any of us truly understand.

The final chapter focuses on prayer, which he defines as a “growing in Christian humanity” (p. 61).  Prayer is much more than asking God to do things – it is a process of aligning oneself with Jesus.  He points us to the Lord’s Prayer not only as a model of prayer or a prayer to be said, but as revelation of God’s vision.  The prayer opens with the “Our Father,” a recognition of relationship.  In exploring this prayer in particular, Williams points us to three early interpreters – Origen, Gregory of Nyssa, and John Cassian.  All three help us come into a better understanding that prayer is relational.  It even brings healing to relationships.  Quite often we think of prayer as something we say or something we do, but in reflecting on what these early Christian leaders had to say about prayer, Williams suggests that it is really about what God is doing in us.  We don’t pray to persuade God to do something – like getting God’s attention – we are engaging in an act of listening.  He notes too that these writers envision there being a relationship between prayer and living justly – “prayer is the life of Jesus coming alive in you, so it is hardly surprising if it is absolutely bound up with a certain way of being human which is about reconciliation, mercy, and feely extending the welcome and love of God to others” (pp. 80 – 81).  Prayer is finally about being faithful to God.

The book is short in pages, but long in wisdom.  Because it has its origins in talks given at the cathedral it is not an academic tome.  It is instead a spiritual reflection that invites us into the conversation about what it means to be a Christian.  It is about being engaged in practices that draw us into the transforming presence of God.  Since each chapter includes guides for reflection and discussion, this can easily be used for a small group conversation.  However it is used, it should inspire a broader vision of the Christian faith – one that is gracious and winsome.  This is not a vision of a tradition that is focused on excluding.  Neither is it a vision that is devoid of substance.

My advice then is to take up and enjoy the wisdom present here.  Take it from a Disciple pastor who is an Anglican at heart!
Email Post
Labels: Anglican Communion Baptism Bible Books Christian Doctrine Christian Practices Christianity Eucharist Lord's Prayer Prayer Reviews Rowan Williams

Kurt Iver Johanson said…
Thank you, Robert Cornwall, for this. I am, presently, using this volume in a Home Study, the next few months.

We are set to start tomorrow evening.