WE MAKE THE ROAD BY WALKING (Brian McLaren) -- Review: 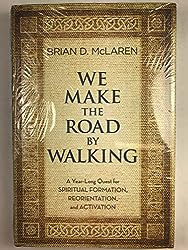 The Christian community is in a period of transition.  We don’t know what the future holds.  Certain strands of theology suggest that God has already planned out everything.  We may not know the intricacies of the plan, but God does.  Such a vision can lead to a degree of passivity.  What will happen, will happen.  There are others, however, who believe that future is much more open.  They believe that we have a role to play in that future (I count myself among this group).  The question is – how do we prepare ourselves for this journey into the future?  We might also ask about the resources available to us so we can work with God in creating this future.   One of these resources is the Bible.  The various lectionaries have offered the community ways in which to draw upon this resource in a somewhat organized manner.  Brian McLaren has entered into this conversation with his own version of a lectionary focused on the premise that God is concerned about “aliveness.”

McLaren is a well-known speaker, author, provocateur, Emergent leader, and former pastor.  Believing that we create the path for our journey as we walk it, McLaren has laid out a fifty-two week journey through the biblical story, from Creation to the Consummation (Revelation).  It is a journey that we take with God that will last for a life time – that is, it never ends – until the consummation of all things.  Expressing a Process or Openness vision of God, McLaren suggests that "we don't need to wait passively for history to happen to us. We can become protagonists in our own story. We can make the road by walking'(p. xi).

The book can be used by individuals or by groups.  In fact McLaren envisions the book being used by groups, whether they are informal small groups or even larger congregational venues.  There are fifty-two chapters (though at Christmas and Holy Week there are sub-chapters).  Each chapter begins with a listing of one to three scripture texts.  These will be the foundation for the conversation.  What follows is a meditation of three to four pages.  McLaren envisions a group reading the lesson and then engaging in conversation about it.  He recognizes that the interpretation provided is but one of many possible responses.  The lesson then is a starting point, not an end point.  It is a conversation starter.  He suggests that pastors might choose to use the meditations in place of a sermon.  I’m not so sure that’s the best way of engaging this book.  They can, however, serve as a sermon starter.  That is simply my own bias – especially if one is to use this as a year-long effort.

The image that McLaren lifts up throughout the book is “aliveness.”  He suggests that when people talk about spirituality they’re talking about seeking “aliveness.”  He interprets (in a footnote) the Greek words zoein aionian, which we are often translated in the New Testament as “eternal life,” but to McLaren this translation suggests “life after death.”  Instead of that understanding, he believes we’re better off translating it as “life in the present age.”    Or better, “true aliveness.”  My Greek has long since disintegrated, so I will concede the point.

It is this image of aliveness that steers the book.  We begin with creation in the first chapter and we move through stories of life and death until we get to Jesus and then to the Spirit and then to the consummation of all things.  McLaren believes that this idea of aliveness needs to be considered at this very moment and it needs to be released globally.  He writes that he believes “that the Spirit of God works everywhere to bring and restore aliveness – through individuals, communities, institutions, and movements” (p. xvii).

With this vision of aliveness present, we move through the book.  Part I invites us to consider the topic: "alive in the Story of Creation." In this section the focus of the meditations is on readings from the Hebrew Bible (though New Testament readings are provided as well).  We reflect on the stories of Abraham and Jacob and Joseph.  We move through the story of slavery and freedom.   With Part II we move on to the story of Jesus and being “Alive in the Adventure of Jesus.”  The first four chapters of this section correspond to some degree with Advent (though the third Sunday of Advent would focus on the story of Herod and his effort to do in Jesus.” If you choose to use this as an alternative lectionary you may want to figure out how this section fits the calendar.  Part II continues this conversation with being "Alive in A Global Uprising." The section begins with several chapters focusing the Sermon on the Mount, leading up to Holy Week, a section that corresponds to Lent.  The chapters that follow Easter – “The Uprising Begins” – explore the forms that this uprising takes, including fellowship, discipleship, worship, partnership, stewardship, and experiencing hardship.  Not quite seven Sundays, but almost.  This leads to the final section that begins with Pentecost and focuses on the ongoing work of the Holy Spirit.  The question that is addressed in this section is:  “how can we participate with the Spirit in this ongoing movement,” which he had introduced in earlier chapters?  The journey comes to an end with a reflection on the end that is God.  The texts don’t come from Revelation, but lift up the idea of resurrection.  Science may predict the extinction of the universe, but all that is will remain remembered by God.

This is Brian McLaren at his best – in saying this I’m in agreement with the blurb offered by Tony Jones.  I’ve read a number of McLaren’s books, and what marks this book is its simplicity.  By focusing his attention on the biblical story, and reflecting upon it, along with inviting the reader to do the same, he makes use of his natural gift at intuiting the message of Scripture and the gospel.  It is a gracious book.  It offers a realistic take on the world, but offers a word of hope.

It can be used in a variety of ways, from individual spiritual reflection to congregational conversations.  Each chapter includes an invitation to "Engage." There are questions that invite reflection for both adults and for children.  The inclusion of children is important, because too often we push them off to the side and don’t find ways of engaging them in the conversation.  There is also an invitation to act ("Activate") in each chapter, along with an invitation to meditate. At the end of each quarter, there is another opportunity to stop and reflect on where one has been.

Should one wish to use the book in a group, McLaren offers guidelines for creating "Learning Circles" (Appendix II).  These guidelines are really useful for any group conversation, whether with this book or another resource.  He also envisions the book being used in the context of worship – whether informal or formal – and therefore provides us with a liturgy that can be used if desired. It borrows in large part from the Book of Common Prayer and offers the opportunity to share in the Eucharist or if that’s not possible other ways of concluding the conversation.


The reflections are all thoughtfully laid out.  McLaren writes with clarity and with a minimal amount of theological jargon.  His years of teaching English prior to ministry have always made his books accessible.  There is therefore a sense of winsomeness here that will prove inviting and attractive.  Most of all, by taking this walk with God, one will gain a better sense of the biblical story and of God’s vision for the world in which we live, a world that we have been charged with caring for in partnership with God.  It is, therefore, a book worth considering carefully for study and reflection and for action.
Email Post
Labels: Brian McLaren Christian Activism Christian life Church Creation Lectionary Reading the Bible Reviews Spiritual Formation Spirituality Theology