THE DEVIL LIKES TO SING (Thomas J. Davis) -- A Review 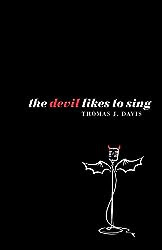 Do you believe in a personal devil? That is often a corollary to questions about whether you believe in Jesus and have accepted him your personal savior.  The assumption on the part of many is that the Devil or Satan is the evil counterpart to Jesus.  If you believe in one (and belief here doesn’t mean trust, but accept the existence of a being), you are expected to believe in the other.  Furthermore, if you believe in the existence of both entities, then you must decide who you will support in what is presumed to be a cosmic battle between good and evil.  It’s a bit like the Giants – Dodgers, Yankees-Red Sox rivalries.   Many liberal/progressive types reject this rather dualistic understanding of reality.  They likely accept the existence of Jesus and may commit themselves to be his follower, but as far as there being an alternative power known as the Devil or Satan that’s a different story.  They might affirm the presence of evil, even accepting its systemic presence, but they don’t necessarily want to personalize this power.

Those are, of course theological questions that have taken up the attention of many theologians (and preachers).  But much of that conversation is rather abstract.  Perhaps one of the reasons why we have tended to personalize evil is that it’s easier to understand the reality of evil.  Having something concrete to reflect on can help stir the imagination.  Surely that’s one of the benefits of the Harry Potter stories – they help us put a face on evil.    C.S. Lewis offered something like this with his Screwtape Letters, and now Thomas J. Davis offers us his take on the matter in The Devil Likes to Sing.

Thomas Davis is Associate Dean for Academic Programs and Professor of Religious Studies at the Indiana University School of Liberal Arts at IUPUI.  Holding a Ph.D. from the University of Chicago (a school that figures in this book), he’s somewhat of a Renaissance man, having authored several other novels as well as more academic studies focusing on John Calvin, who also figures at points in the book under review.

The Devil Likes to Sing is a work of fiction with a theological/ethical focus.  If you hate spoilers, you might not want to read beyond this paragraph.  I’ll try not to reveal too much even after the paragraph ends, but I might reveal more than you want to know.  In case you don’t want to read further in the review, let me say that Davis puts a bit of a different spin on the devil’s story.  He uses humor, contemporary cultural images, and a more subtle face on the prince of darkness.  This isn’t a longish book, so it’s a relatively quick read.  At the same time there is a theological depth to it that requires some thought.  There’s enough theology here to draw in the theology geek, but not so much that it puts off those not so interested in the intricacies of theology.  But, what is important here is that Davis is a thoughtful theologian who is able to bring into conversation a serious topic – the subtlety of evil.

In Lewis’s famous Screwtape Letters, we are introduced to the slyness of the devil through a series of somewhat comical, but thought-provoking dialogues between a senior demon and a novice, with guidance given on how to tempt humans.  There’s some of that here, though it’s more direct.  That is, the Devil deals directly with Timothy, a former doctoral student at the University of Chicago Divinity School, who had focused his dissertation on Augustine, despite difficulties with the languages – especially German (I can sympathize).  Timothy doesn’t pass out of the program, gets a job indexing theology books, and finally gets rich writing gift books (the coffee table ones).   In other words, as far as authors go, he’s something of a hack.  He’s getting rich, but he’s not really a writer.

In the course of the book, the Devil who likes to sing and often appears in the form of a person who looks a lot like John F. Kennedy, Jr., becomes Timothy’s muse.  He takes him down into the darker areas of life, and as a result helps Timothy begin to write in ways he’d never done before.  He starts with a series of short stories that are powerfully written, and deeply reflective of human realities.  The hack becomes a serious writer – so serious that his short stories come to be studied in literature classes at the University of Chicago.

In many ways this is not just fiction – it’s allegory.  Davis isn’t arguing for the existence of the devil as an independent entity at war with God.  Instead, he is inviting us to look at life and the world from a different perspective.  He introduces us to our own dark side.  He reminds us that sometimes it is the midst of darkness that creativity emerges.  At the same time, he reminds us that we can become immune to the implications of the tragedies that happen around us – and the question of where God fits into all of this.

As the book moves on, Timothy begins to see through the many ruses that that Devil throws at him.  He begins to move out of the darkness, and reengage with goodness.  But he’s not the same person as before.  He’s more aware, more understanding of the world.

I won’t say anything more about the story, only that it is worth reading.  It is fiction, but it’s not fluff.  There is a lot of meat here that will be food for much thought and possibly conversation.  As for the music – perhaps it’s not surprising that the Devil likes to sing opera – especially Wagnerian opera!