Sex and Marriage Go Together -- Part 1 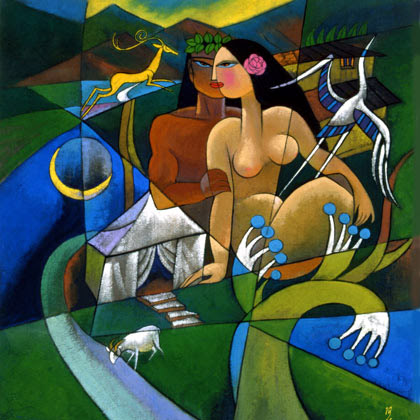 In the first creation story, after God created humankind, both male and female, God told them to be “fruitful and multiply” (Genesis 1:28).   This command implies sex.  In the second creation story we are told that “a man leaves his father and his mother and clings to his wife, and they become one flesh.”  It is possible, though not necessary, that this statement implies a sexual relationship.  It could also suggest the merging of families.

From a strictly biological perspective, sex is a normal part of human experience.  It is the means by which humans procreate.  But sex isn’t just about procreation.  Sex can also be about pleasure.  That too might have an evolutionary element to it.  If it were not a pleasurable experience, then it’s likely that humans would forgo it.  That would lead to the demise of the human race.

From a strictly biological perspective, one needn’t be married to have sex or to procreate.  Many have sex outside of marriage, even if there are taboos against it.  It’s not just in recent years that people of engaged in sex outside marriage.  It’s only that some of the rules of loosened.  In many ways, the rules generally only applied to women.  Rarely will you see a man charged with adultery.  But as we’ve seen in the ancient world, women were seen as property.  A woman who had sex outside of a prescribed relationship was considered spoiled property.  We don’t think of women as property anymore – or at least I hope we don’t, despite quaint customs like a father giving away the bride to her new husband.

Although we may have moved beyond the idea that women are property, there are valid reasons for setting certain boundaries for sexual behavior.  In the ancient world the relationship between husband and wife was generally unequal.  The same was true, ironically, in the way same-relationships were practiced in Greek and Roman culture.

The question of sexuality and spirituality has long been a matter of debate.  There have been in some religions fertility cults, in which sex was used as a talisman to encourage the gods to bless the land with fertility – not just children, but the flocks and the crops as well.  Many of the prohibitions in the Hebrew Bible, which were later brought into the New Testament, are responses to these fertility cults.  At the same time, there have been faith groups that have believed that sexuality and spirituality were incompatible.  Sex was considered too carnal and earthy.  Therefore a spiritual person would want to avoid such corruption.  Such views, often Gnostic in their roots, have led to the development of monastic celibacy.  It appears that such a view had permeated a rather conflicted Corinthian Church.  Certain members of the community had gotten it in their head that true spirituality required sexual abstinence (1Corinthians 7:5).  This was true, they believed, whether one was married or not.  However, some of the members had begun to act unbecomingly –   had problems with sex.  Some of the church members were acting in ways that were unbecoming to the community, by seeking sexual satisfaction outside of the marriage relationship (perhaps by visiting local prostitutes).

Our understandings of sexuality, even if we embrace sex as part of marriage, have often been colored by this view of sex as being carnal (and even dirty).  Men are supposed to like it, women don’t.  A vision of sexuality that has influenced many though the years is exemplified in a prayer of St. Augustine.

Truly it is by continence that we are made as one and regain that unity of self which we lost by falling apart in the search for a variety of pleasures.  For a man loves you so much the less if, besides you, he also loves something else which he does not love for your sake.  O Love ever burning, never quenched!  O Charity, my God, set me on fire with your love!  You command me to be continent.  Give me the grace to do as you command, and command me to do what you will![1]

It is, therefore, not surprising that a portion of scripture that celebrates sexuality, like Song of Songs, is read allegorically so that Christians might experience its spiritual message and not be brought down to the carnal level.

It has normally been assumed that marriage involves a sexual relationship.  We talk about a marriage being consummated.  In some traditions an unconsummated marriage can be annulled – that is, according to this understanding, the marriage never occurred.  It’s not the wedding ceremony or the license; it’s the sexual relationship that defines marriage.  Remember the story of Jacob and Leah.  He might protest that the woman he slept with was not the woman he intended to marry (Rachel), but since he slept with Leah, she was his wife (Genesis 29).  One of the reasons for this is that a woman considered property, and if she had slept with a man, not her husband, or was rejected by a prospective husband, then she would be spoiled or damaged goods.   A man could sow his seeds with relative impunity, but once a woman had been with a man she essentially belonged to him.  We no longer, at least in western culture view women in the same way (it is hoped).  Though there are still elements of this understanding present in subtle forms.  Men are still freer to be sexually active outside marriage than are women.