THE MAINLINER'S SURVIVAL GUIDE TO THE POST-DENOMINATIONAL WORLD. 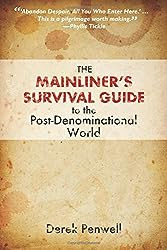 The Mainline Protestant Church has been in decline for much of my life. The churches that make up the Mainline reached their height of influence and numbers within a few years of my birth at the end of the 1950s. Once full churches are either closing or surviving with a scattering of aging members who can remember better days.  Yes, there are a few congregations bucking the trend, but overall, the Mainline has moved to the sidelines.  At least that’s the interpretation of many observers.   Going back a generation we were told that the reason why these churches were struggling was their liberal views – politically and theologically.  Ironically, today demographers are discovering that younger adults are ignoring the church because of its perceived conservatism. That could bode well for Mainliners, except that there’s little social pressure to encourage those who are disinclined to embrace conservative churches to embrace old line Protestant churches that have a more open theology and social views.  Those of us still in the church might want to throw up our hands and walk away, but at least some of us believe that we have a message that can be a blessing to the world, we just have to figure out how to get the attention of an often distracted audience.

Derek Penwell is a Disciples clergy colleague of mine serving a church in Louisville.  Derek has evangelical roots but has embraced the message of Progressive Christianity that is lodged within Mainline Protestantism.  He might be a Mainliner by affiliation, but he’s also frustrated by attempts to protect the ecclesiastical institutions at the expense of the Gospel.  He believes efforts at propping up traditions and institutions that are crumbling around us serve to inhibit the message of God’s realm from being heard.  Rather than working on a better marketing plan, Derek wants the church go bold in its proclamation of this progressive theology and message of justice and love.   His purpose is simple:

My purpose is to help mainline denominations and their congregations get a correct read on the situation, embrace death as a liberation from having to “succeed,” and learn how to live” (p. 5).

Part of this message is a reminder that salvation for the churches isn’t going to come from national offices of denominations.  It will have to be found closer to home – in the contexts where ministry is being done.

The book is divided into three sections:  “Where We Came From;” How We’re Continuing Our Legacy;” and “How Can We Continue Moving Into a Post-Denominational World.”  For many of us the book describes a reality that we’re already quite aware of.  We might have already read numerous other books that describe something similar.  One of the things that Derek does is dig into his own denomination history.  He suggests that we are at a similar place to where the church stood in the years immediately following the American Revolution.  It was an age of change and expansion, but it was also a time of religious flux.  On what was then the American frontier a religious movement emerged that sought to offer an accessible and adaptable faith to the people living on the frontier.  This movement is the Stone-Campbell Movement.  Like the Methodists and the Baptists, the Christians and the Disciples (the followers of Barton Stone and Thomas and Alexander Campbell), were less beholden to tradition.  The Disciples were Biblicists who sought to offer a simple gospel upon which they believed (in a very Enlightenment manner) could unite the disparate Christian communities living on the frontier.   Like the American populace of that day, this new movement stressed the freedom of the individual to choose how to understand and apply the Bible.  There is something else present in this era that makes the post-Revolution age similar to our own.  Many of the people were unaffiliated.  Cut off from the social pressures many chose not to attend church.  Then when revival came to the frontier, people didn’t consider denomination.  They chose movements that made sense of their realities.
In the second section Derek moves from the past to the present.  He speaks here of the growth of the “Spiritual but Not Religious Movement,” which is growing quickly as people decide to embrace God without accompanying institutions.  Why not encounter God at the beach rather than attend boring committee meetings and less than inspiring worship services.    While there is a movement away from institutional forms of the church, that doesn’t mean there is nothing to salvage from the church.  Taking a missional perspective, he points our attention outward and invites us to consider the need to share leadership across generations and move past more corporate/business models of leadership.  Whereas we were once told that conservative churches are growing, Derek believes that the future lies with theologically inclusive communities of faith.  He again returns to his Stone-Campbell roots and points us toward a non-creedal vision, while calling judgmentalism the new heresy.   Derek adds technological savvy to a de-emphasis on institution and inclusive theology as the key to survival, with special emphasis on the use of social media.

In the final section Derek offers chapters looking at different aspects of what this church will look like going forward.  It will have to look more like Jesus – think of Pope Francis’s economic statements.  It will find different ways of being community – younger adults aren’t looking to join institutions or add another thing to do to their lives.  They’re looking for friendships in the midst of a mobile world.  There must be an ecological focus and it must be welcoming to the LGBT community.  The culture has turned the corner on homosexuality, and the church must take stock of this.  Mainline churches, therefore, are among the best equipped to be this community of welcome.

So, does the Mainline Church have a future?  There is much going against it, as Derek makes very clear.  Part of the problem is generations of institutional baggage that will be difficult to jettison, but all is not lost.  He closes the book with this word of hope:

I believe that mainline denominations, if they resist the urge to fall into despair can survive the desert, can escape the vortex of doom, which threatens to such the life out of the church.  Mainline denominations, which inhabit the grace-filled, ecumenical vision of God’s work, need to find and empower those pioneers who would once again venture into unknown territories to do God’s work.  (p. 186).

Escaping that vortex of doom is the tricky part!

I’ve been waiting for some time to read the book.  I share many of Derek’s concerns, and I think that the denomination we share has some important resources that might help our denomination thrive going forward.   As I read the book, I liked much of what I read. I agreed with most of his analysis. At times, however, I wrestled with the tone. Part of this has to do with the style, which is informal, almost blog-like. Part of it is generational. As a late Baby Boomer, I find myself conflicted about the nature of our communities. I believe in change. I've preached change. But I'm a bit more reticent to throw out some things that those younger than me might not see has having value.  Perhaps the best way to put it is a feeling that at times Derek takes an overly argumentative tone.  I realize that when it comes to tone, everything is in the eye of the beholder.  Therefore, I will let others determine whether he gets the tone correct.

Where I saw this play out in interesting ways is the chapter on welcoming the LBGT community.  I know that Derek and has church have taken much more radical steps toward welcome than has mine.  There is in this chapter a clear sense of impatience with the slowness with which some in the church have moved.  It’s possible that my congregation and I stand under his critique.  While we’ve moved a significant distance toward being open and affirming, we’re not there yet and I’ve tried to take this a step at a time – in the belief that we need to get this right.  I’m wondering as I reflect on the chapter whether we need to pay attention to context.  At the same time justice and love are at stake.


There is a roughness to the book.  Again, this stems from a blog-like quality to the book, but also to the way in which Derek writes this in a dialogical fashion -- leading to that argumentative style.  In terms of layout, I found myself distracted by the inclusion of web addresses in the body of the text.  Since he used footnotes for some aspects of the book perhaps all citations could have been placed in footnotes.  While there are places that prove distracting, the conversation Derek seeks to elicit in this book should prove helpful to a church trying to find its way forward in a most challenging social/cultural context.  There is much food for thought present in this book.  There is also a great deal of passion – and we need some of that.

All is not lost for the Mainline.  The future is daunting however, and so we need prophetic voices like Derek’s.  As someone who hails from the same denomination, I'm glad to hear that our own tradition was born and thrived in a context very similar to our own.  Though, I must confess that there is a disconnect, at least in my reading of the book, between the individualistic elements of our tradition and Derek's concern with the pursuit of an overly-individualistic faith.  At the same time, I’m left wanting more, especially reflections on how we can truly develop a sense of community.  As a suburban pastor of a small by geographically dispersed congregation, I want to know how to build community.  I want to know how we can build a community that is not only inclusive of the LGBT community, but is also ethnically diverse.  Yes, there is more to be said.
Email Post
Labels: Church and Culture Derek Penwell hope Inclusiveness Institutional Religion Mainline Protestantism Reviews Stone-Campbell Movement

Gary said…
EVERY "mainline Christian church" is spiritually dead. There is no life at all. God isn't there, and He won't be coming by. You are all just a bunch of heathens pretending to be Christians.
8:49 AM

Brian Morse said…
Derek's ideas are not far from my ideas, but his style repels me. This is not a put down. I know that his style is needed. I doubt if I read this book for this reason, but I am glad that he is being faithful to his calling.
9:14 AM