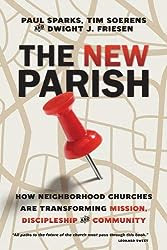 I was at a local ecumenical clergy meeting.  We were talking about the church and the community.  The Catholic priest who was involved in the conversation spoke of the parish, and how the local community was divided among the Catholic churches.  He spoke of the responsibility that the church had for everyone living in that geographic area.  Most Protestant churches, at least in the United States don’t think in the same way.  We’re more likely to think in terms of franchises, competing for business across the landscape.  This is especially true for those of us living and serving in the suburbs.  But what if we took this idea of parish more seriously?  What if the churches began to see themselves having responsibility for the community in which they find themselves in?  What if, in other words, we reclaimed the ancient idea of the parish?

For the last generation or so, we have seen the advent of the mega-church.  Large churches aren’t new.  Cathedrals have been with us for centuries, but even in the shadows of cathedrals you would find parish churches.  It was these smaller churches that most people worshipped.  Cathedrals were for big events, not community development.  Mega-churches continue to thrive, but many are finding these to be too impersonal and don’t enable persons to engage their community.  So perhaps it is time to return to the parish.

Paul Sparks, Tim Soerens, and Dwight Friesen are pastors and teachers who have discerned that this is the need of the hour.  They have come to believe that churches are called to inhabit neighborhoods.  In some ways this is a further expression of the missional movement, but it takes a different turn.  In this vision, the people of God are invited to become a community that lives and cares for its neighbors in a very intentional way.  The goal is the transformation of the community.  The book is an outgrowth of this vision that led to the development of “The Parish Collective,” an effort to connect parish churches with each other so that they might share stories and resources.

The idea of the parish is an old one, but the authors of this book don’t wish to simply re-establish the old parish idea.  They feel the need for what they call the “new parish.”  The earlier version is too rooted in the idea of Christendom.  It was too focused on the hegemony of a single denominational perspective – most often established by law.  On the other hand, “the new parish can include many expressions of the church living in community together in the neighborhood" (p. 31).  In other words, in the American context at least, parishes aren’t established by law.  They don’t have government sanction.  In any neighborhood there might be a number of congregations.  Each of these can be expressions of the new parish idea, as they inhabit and serve to transform the neighborhood.  In my own neighborhood, there are a number of congregations.  Down the street is a Presbyterian Church.  Its pastor is a good friend and colleague.  We’re not competitors.  We’re colleagues and our congregations are partners in ministry.  There are several churches just around the corner – they too are partners.  We can all take our places serving the community, bringing the Gospel in all its forms to the neighborhood.  As congregations we don’t define the neighborhood (it already exists), but we live our faith in conversation with this neighborhood (if we embrace the idea of the “new parish”).

The authors divide the book into three parts, with each part becoming increasingly longer.  Part one seeks to answer the question of why we need the new parish.  They suggest that this is needed because we are living in a world of dislocation.  The world has become increasingly mobile and people don’t know each other like they once did.  At the same time, the church has become misplaced.  We have lost our connection with place.  We’ve focused on programs and affinity.  That has unfortunately led churches to become increasingly homogeneous.  We can overlook the needs of those in the neighborhood, especially the poor.  In this new model, the church is “within its place” and “in that place with others.”   That is, it is rooted in the community.  It is also collaborating with the community (pp. 46-47).

Part two defines the New Parish in terms of faithful presence, ecclesial center, and what the authors call the “the new commons.”  Faithful presence involves listening to the neighborhood, of recognizing blind spots, avoiding the magic of technique, and instead putting faith in God as the church participates in the work of God in the neighborhood.  With regard to the ecclesial center, they envision becoming integrated people.  All that we do, including mission, is integrated into the center, which is the worship of God.  The definition of worship here is important, because for them it involves much more than what happens on Sunday morning – it “encompasses the whole of our collective lives together” (p. 85), and it integrates community, spiritual formation, and mission.  The “new commons,” builds on the ecclesial center to integrate the entirety of life, including one’s education, civic engagements, economic life, and one’s presence in the environment.  Where does faith fit in these varied areas of life?

This book closes in Part Three with a discussion of how we “practice the New Parish.”  In this section they speak of four practices:   presencing, rooting, linking, and leading.  Regarding presencing, they speak of the ways in which the church adapts to the movements of the Spirit, and participates in God’s redemptive mission.  The fourth practice involves developing a new form of leadership that asks the question of whether one is leading a life worth following.  It can be defined  further “as the capacity to mobilize desire for reconciliation and renewal through collective action, while paying ongoing attention to God’s story, to the fidelity of the group within its place and to the leader’s own transformation” (p. 170).  There are different ways in which this leadership exhibits itself – from the designer to the conductor.  This is not a top down approach, but one that engages the entire community.

I have left the two middle practices to the end here, because they are key to the concept and need to be kept together.  These practices are rooting and linking.  With regard to rooting, the authors speak of the importance of stability -- of dwelling in a community and investing in it – something that is difficult to achieve in our mobile world.  If we are to listen and become a faithful presence, we need to put down roots, or we won’t leave much of a mark.   The danger of stability is the development of a silo mentality.  We can easily become so focused on the near neighborhood that we lose sight of what is happening elsewhere in the world – or across town.  This is, in my mind, especially troubling in suburban contexts.  Thus, linking forms an important counterweight.  By linking neighborhood congregations connect with others in a community as well as across the world.  This is especially important, in my mind, for suburban congregations.  These congregations can easily get too comfortable in their surroundings.  Life is good, and we take care of ourselves.  Something I’ve learned in my work in community organizing is that suburban congregations have a difficult time naming issues that affect them, and so mission becomes paternalistic.  By linking with other congregations, in different situations, we can learn new ways of being church in the neighborhood.

The book metaphorically scratched where I was itching.  As pastor of a small suburban congregation, the membership of which is scattered across the metro area, I have been pondering how we can move toward being a neighborhood church.  I have been wondering how to be missional without losing the spiritual foundations of our work in the community.  I found much to think about in this book.

The book is well-written, thought provoking, and worth spending time with.  Is it the salvation of the local church?  Is it the strategy that fits the time and place?  The fact is there is no magic bullet, but the work that these authors are doing at the local level, and through building the Parish Collective movement, may be a godsend to churches across the land.  One of the concerns that one has when reading a book with multiple authors is whether it becomes disjointed and difficult to follow, but such is not the case with this book.

If we are to be a blessing to the nations, it would seem that the work will start close to home, in our own neighborhoods.  There the church has the opportunity to provide an alternative culture of grace that transforms the broader community – not in a coercive manner, but simply by being present in a way that extends grace and love.  This book is an excellent place to start in our journey toward fully engaging in the work of God in the world.
Email Post
Labels: Book Church Dwight Friesen Missional Churches Neighbors Parish Paul Sparks Review Stability Tim Soerens

This is a terrific pastoral examination of this Scripture and an excellent starting point for churches who find themselves in the midst of a conflict.
12:33 PM