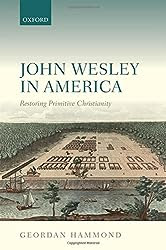 Primitivism comes in many forms.  Throughout the history of Christianity reformers have attempted to return to the pristine purity of the primitive church, even if they haven’t always agreed on what marks the true primitive church.  For some the true primitive church is to be found in the pages of the New Testament Church (especially the Book of Acts), while others extend the boundaries of primitive Christianity into the fifth century, long enough to include Nicaea and Chalcedon.  Counted among these primitivists was John Wesley.  Wesley had imbibed a high church vision of primitive Christianity, one that was rooted in the traditions of the early church during his days at Oxford. When an assignment came to go as a missionary in the new British colony in Georgia, Wesley decided to use this assignment as an opportunity to implement his primitivist vision among his charges.  While he believed that he was being assigned by the Society for the Proclamation of Christian Knowledge (SPCK) to minister to the Native Americans of the region, when he arrived in Georgia it became clear that his parish would be the community in Savannah.  Although he continued to envision a mission among Native Americans, he did not let this setback deter him from pursuing his dream of restoring the primitive church in America.

The normative interpretation of Wesley’s sojourn in Georgia is that it was a failure.  Not only did he fail to institute his primitivist vision, he was brought up on charges for his narrowness of practice and ultimately moved away from the theology that drove his mission in Georgia.  That is, his time in Georgia has been interpreted in light of his later Aldersgate experience, in which Wesley saw himself experiencing new birth.  This has led many Methodists to look at mission in Georgia a period of spiritual darkness and therefore of little value to understand Wesley’s later vision.  Geordan Hammond offers us a different picture.  Having consulted the primary sources, including Wesley’s own diaries from the period, he tells a different story.  Even if Wesley reconfigured the nature of his primitivist vision, he never lost the belief that the renewal of the church depended on restoring primitive Christianity.  As it is recorded on his tombstone, his mission was “to revive, enforce, and defend the Pure, Apostolical Doctrines and Practices of the PRIMITIVE CHURCH” (p. 203).  The way in which he understood this mission was developed in the crucible of his mission in Georgia.

Methodism is often considered the Arminian branch of the evangelical movement that emerged in the Church of England during the eighteenth century.  It is acknowledged that Wesley had high church proclivities, but the common assumption is that he found it wanting and after a moment of spiritual awakening following his time in Georgia, which is viewed as a failure, he abandoned his former views and became an evangelical. In other words, it left no positive mark on his life and ministry.

John Wesley in America is Geordan Hammond's a wonderfully written revised version of his Ph.D. dissertation (University of Manchester).  In it we discover that there is much more to the story than we have been lead to believe. Instead of a time of failure, Wesley was able to experiment in Georgia with his vision of restoring a pure primitive Christianity. While he may have modified his views as time passed, and in part due to his experiences in Georgia, it was not because he failed. Instead, it was because he was able to test ideas and pursue them where they led him. It is not that he abandoned failed ideas, but rather he modified and remolded inherited ideas.

The book takes us from Wesley’s earliest education and ministry in Oxford through his journey to America on board the Simmonds, his two years in Georgia, and on to his return to England.  Wesley had gone to Georgia with the expectation that he would minister to the Native American populace. Once in Georgia, he found few opportunities to live out that vision, but his ministry in Savannah (not his choice) did give him opportunity to try and implement the vision of primitive Christianity among his new parishioners.  When he arrived in Georgia, he was a high churchman of strong convictions, holding views similar to the most essentialist elements within the Nonjuror movement that had separated from the Church of England in the aftermath of the Glorious Revolution.  Wesley was a primitivist who, at least in this period of his life, believed that the primitive church was that church existing into the fourth and even fifth centuries.  Later in his life, after his return to England, he would limit the period of primitive purity to the New Testament Age, at this point he held to a much broader definition.

Since my own area of academic study is the Nonjuring movement, I was most intrigued by the extent to which Wesley was involved with leading figures among the Nonjurors.  I knew of his involvement with them, but not the extent to which he was of similar mind on issues that were close to the heart of the partisans of the Essentialist or Usages party.  In developing his own liturgical theology he had imbibed the views of John Johnson, a High Church Anglican whose views of Eucharistic sacrifice provided the theological foundation to the Nonjuring liturgical practice.  Like Johnson, Wesley did not leave the established church, but he was greatly influenced by one of the most creative of the Nonjuror leaders, Thomas Deacon of Manchester.  At the heart of the Nonjuring liturgical developments was the rediscovery of four usages, which they deemed necessary to obtaining the full benefits of the Eucharist.  These four usages which they found present in ancient liturgies, but were absent from the liturgy of 1662 were the mixture of water/wine, oblation, epiclesis (invocation of the Holy Spirit), and prayers for the dead.  While these usages were present, at least implicitly in the 1549 liturgy, they had been removed from the 1552 Prayer Book in an effort to align the English liturgy with Reformed understandings of the Eucharist and continued to be absent in the 1662 liturgy.

While many in the high church camp were uncomfortable with the Reformed ethos that had formed mainstream understandings of the liturgy, it was left to Nonjurors Thomas Brett, Jeremy Collier, and Thomas Deacon to make these elements explicit, seeking to restore the primitive liturgies they found in works such as the Apostolic Constitutions and Apostolic Canons, which they believe went back to the first century.  Wesley had imbibed the work of Johnson and the Nonjurors – having close contact with Thomas Deacon for whom he contributed an essay on the fast days of the church to a collection of liturgies and devotional works, before journeying to Georgia.  Once in Georgia he found a freedom that would allow him to experiment with liturgical elements he had come to believe were essential to full realization of the benefits of the sacraments.  This freedom stemmed from the fact that there was less ecclesial oversight in this new colony than in England.  During this period he expressed his churchmanship with an almost rigid adherence to essentialist visions of apostolic succession, as expressed in his efforts to rebaptize Lutherans, whom he deemed unbaptized (again standing in line with Nonjuring views).  He sought to exert strong discipline on parishioners, including his efforts to exclude persons from the Table whom he deemed unworthy, even as he instituted frequent communion.

As he sought to institute his vision of the primitive church in America, he was innovative in many ways.  For instance, he caused ripples of discontent in the community, especially among the elite, for his inclusion of women in his societies and even in leadership. He was at work, it appears, establishing an order of deaconesses. In part this order was supposed to help with preparation for baptism, since Wesley believed that immersion was the most appropriate mode of baptism. Ironically, it was one of the women he worked with, a woman for whom he seems to have had romantic feelings for, but since he was ambivalent about whether he could engage in the form of ministry he felt called to and be married, she married someone else. When she drifted away from regular fellowship he ended up barring her from the Table and this led to charges against him being filed -- he was accused of exceeding his authority as a priest (taking on episcopal functions).

As one who has focused much of his scholarly attention on the Nonjurors, I found Geordan's work on the influence of Nonjurors such as Thomas Deacon extremely insightful. I knew that Wesley was influenced by Deacon, but this book advanced the discussion much further. I should note that Geordan made significant reference to my own work on the Nonjurors, but the important point for me is how he showed us how deeply indebted Wesley was to them, and how his own liturgical and eucharistic understandings were in line with the Essentialist (Usages) party among the Nonjurors.

Geordan’s main point is that the time in Georgia was not by any means a failure.  Instead it was a time of experimentation and growth.  Yes, in time he would move away from his more “extreme” high church views, and yet his use of tradition as an interpreter of scripture is surely rooted in this period.  That he had a “conversion experience” at Aldersgate years later does not mean that prior to that moment he was not a Christian – it was instead a moment of spiritual insight and clarity.
The book is beautifully written and thoughtful.  It is a revised dissertation that does not read like a dissertation.  It is scholarly, of course, but it shows that the author carefully wrote this in a way that makes it accessible.  He provides a coherent narrative even as he introduces us to the theological and ecclesial emphases that drove Wesley’s ministry.  While consulting secondary sources, including my own works and the key biographies of Wesley, this book is built on Geordan’s close use of the primary documents and explores how others perceived him.  He not only made use of Wesley’s journals published years later, but the diaries he kept during his voyages and his time in Georgia, as well as the journals and diaries of others present with him on the voyages and in Georgia, including the Lutheran pietists and Moravians with whom he was in close contact. Their responses help fill out our understanding of Wesley’s views and practices.

While I am not a historian of Methodism or even of Wesley himself, I believe that this book written by Geordan Hammond should prove invaluable to those who wish to understand who John Wesley is and how his primitivist vision helped shape what became the Methodist Church.  Whatever the difference between the Wesley of Georgia and the Wesley of later years, surely his ministry cannot be fully understood without recourse to this important period of his life and ministry.
Email Post
Labels: Church of England Colonial America Early Christianity Geordan Hammond High Church Anglicanism John Wesley Methodism Nonjurors Primitivism Restoration Reviews