Theology from the Trenches (Roger Gench) -- A Review 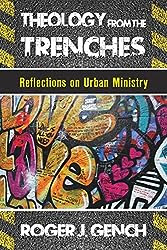 Does the church have a role to play in public life?  That is, should the church devote its attention to things spiritual and stay out of things temporal?  Of course there is always a place for charitable work – that is what it means to love one’s neighbor, but what about taking a further step and engaging the systems that often oppress those living on the margins of society?  Should the church be involved in transforming society or should it stay focused on building the church?    If one feels called to the work of transformation, how will one go about doing this? Questions of this sort relate to one’s theology and how one reads the biblical story.

Using H. Richard’s paradigms of the relationship of Christ and Culture, the Reformed tradition, going back to John Calvin, has assumed that the church is called to engage in the transformation of culture.  The author of Theology from the Trenches, Roger Gench, is part of this Reformed tradition and has embraced the call to be engaged in ministries of transformation.  Currently serving as senior minister of New York Avenue Presbyterian in Washington, D.C., Gench has long experience with community organizing.  His own training and participation in community organizing has come through Industrial Areas Foundation (IAF) affiliates in Baltimore and Washington, D.C.  IAF is the oldest community organizing effort in America, having been founded by the oft reviled Saul Alinsky.  Considering the bad press that Alinsky continues to get long after his death, one might wonder what a minister of the gospel would find of value in such an effort, but if one understands the work of community organizing then perhaps one might have a change of heart (perhaps).

Gench has written an important explication of church-based community organizing.  He speaks to it from the perspective of one who has served as pastor of congregations serving urban communities.  He has found that the principles of community organizing learned from IAF fit perfectly with his sense of calling as a pastor of an urban congregation.  In this book he seeks to connect the principles of community organizing with a theology that is defined by what he calls the "cruciform covenant." By cruciformity, he points to the cross of Jesus and God's work in the world bringing "life out of broken places" (p. 7). This cruciform work is rooted in covenant, because it is unconditional.  It is living out the message of the cross through actively loving one’s neighbor.

This book is deeply personal.  Gench shares stories of his own engagement with community organizing and urban ministry. In chapter one of the book, he speaks of the event that truly sparked his engagement with community organizing.  He was serving as the pastor of a church in urban Baltimore, when a grocery store closed.  It wasn’t a very good store, often selling less than fresh produce and meat. At first thought it seemed as if this was a good riddance.  But quickly he discovered that this was the only store in this part of the community.  It might not serve the populace well, but at least it was there.  Things changed when the people began to organize under the leadership of IAF, an effort that required the involvement of churches to be successful.  From that moment on he got the picture and became committed to the effort.

Community organizing is a political act, because it engages the public square.  People of faith organize so that they may have the strength to change systems that oppress.  The Civil Rights Movement was rooted in the faith community.  Leaders like Martin Luther King were rooted in the church.  They had allies and partners who were not distinctly religious, but without the religious community the efforts would have failed.  The Moral Monday Movement in North Carolina is rooted in the faith community.  When the church enters the public square it is always in danger of being co-opted.  We can be the religious face of an otherwise political venture – and such exists on both the right and left.  For this transformative movement to remain faith rooted, it must be engaged in through prayer, worship, and theological reflection.  Since community organizing appeals to self-interest, theological reflection is required if communities are to move beyond self-absorption to service.   Consider that the command is to love one’s neighbor as one loves one’s self.  Gench writes:

One way or another, we will find ourselves motivate by self-interest.  As deforming manifestations of self-interest in our lives are exposed and transformed through service and attentive, holy listening to God and to others, by God’s grace, we are liberated from lives of self-absorption and enter into the fulfilling experience of loving God, neighbor, and self in ways that bear witness to our true identity as God’s own people who are formed in the divine image.  As such, we are shaped for joyful service in the world pattered on Jesus’ example that seeks the good of others as our own good (p. 88).

Gench speaks to this work from his place serving churches located in urban contexts.  This is often the “trenches” in which great organizing occurs.  In the suburbs, where I am engaged in organizing work the areas of self-interest that lead to service are often less visible to us.  Self-interest can easily be turned into self-absorption.  I have personally struggled with making sense of this reality, but Gench’s work is very helpful in giving clues even to the suburban churches about how to turn organizing to a positive effect – not to shut out the world but to bring transformation to our own contexts.

Because this book is rooted in the struggles of the urban community, Gench addresses two key issues – racism and the need for meaningful jobs with living wages.  As I write this review we are watching the way in which the nation perceives the events that took place in Ferguson, Missouri.  There is a clear racial divide as to the meaning of the events.  Progress will require much listening to grieving voices, but that is not easy.  Nonetheless, Gench gives us guidelines as to how we can have this conversation, one that needs to take place if cities and suburbs are to come together to make meaningful changes to our systems.  The same is true of economic realities.  We are living in an age when well paying manufacturing jobs have disappeared, and many are left to work in retail and fast food restaurants.  These entities often do not pay living wages.  Moving out of these jobs into upwardly mobile ones is not easy for the number of such jobs is fewer in number.  It is telling that great numbers of Ph.D. recipients have graduated into the ranks of the adjunct professorship.  Colleges and universities are able to sustain themselves by paying near minimum wages to teachers, even as administration and management continue to grow.  Movement forward will not happen if we remain separated from each other.  Charity is important but it often ends up being little more than a band aid if the systems do not change.  Love of neighbor thus would seem to require more than handing out food and blankets.

In the course of this book, Roger Gench brings into conversation three components of church-based community organizing.  First he shares the tools of organizing – one on ones, relational meetings, and listening campaigns (congregations engage in listening campaigns to discern issues of importance to the community).  He brings into the conversation the theological resources, including the biblical story along with spiritual practices that keep us focused.  Central to his vision is what he calls the cruciform covenant, a covenant relationship rooted in the cross of Christ.  Finally he speaks to some of the issues that organizing congregations face.  Once again it is important to remember that as important as the issues might be, they are not ultimate.  Issues come and go, but organizing works only if we build relationships with each other.  As an organizer I know that it is important that I build strong relationships with fellow clergy.  It is in the strength of relationship that we are able to stand together in both good and difficult times.

Roger Gench’s book is a most welcome contribution to the conversation centered on church-based community organizing.  He shares the tools, the theology, and the issues.  He addresses the challenges and highlights the opportunities.  To make the book more helpful to the readers/users of the book, each chapter ends with a Practicum that is designed to encourage discussion and action.  His book can also be used in tandem with another excellent book that came out this past year on the organizing work of the churches – Faith Rooted Organizing: Mobilizing the Church in Service to the World, by Alexia Salvatierra and Peter Heltzel (IVP, 2014).  Both cover similar territory, but Faith-Rooted Organizing suggests a movement from self-interest to solidarity.  In many ways, Gench comes to the same conclusion regarding self-interest.  Taken together they form a significant foundation to the missional work of the church in the world.  For all who would want to move into community transformative ministry, Gench’s book is an important read.  Since I see this work as being at the heart of what it means to be church, I would say that it is a must read book!
Email Post
Labels: Books Community Organizing Covenant Faith and Politics Faith in the Public Square Reviews Self-Interest Theology Theology and Transformation Urban Ministry