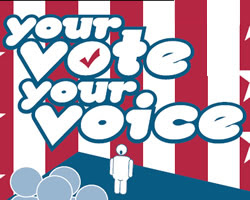 Tomorrow the nation goes to the polls. Are you going to vote?  Some of us have already voted -- I voted absentee so my vote is already in -- and many others will go tomorrow.  Still others will choose not to vote.  If that is their choice, then so be it, but speaking personally (to quote Paul, I don't have a word from the Lord on this), I think this is extremely wrongheaded and cynical.  By not voting one gives up one's opportunity to participate in an important part of our life together as a community.  I will be frank.  I have always believed that if you choose not to vote then you have abdicated your right to participate in the conversation about the future of the community and the nation.

You say you don't like the candidates, then vote for a third party.  You say you're turned off by the advertisements, well so am I.  But that's the whole point of the ads -- to discourage you from voting. A smaller electorate is more easily controlled.  You say that there's too much dark money in politics.  Well, that may be, but how does that determine how you vote.  You can go around it by doing your research.  You can say no to the dark money by casting a responsible vote.  If you vote you have the opportunity to make a difference.  And if you vote differently from me, then so be it.  That's your right as a citizen.

Remember too that an American citizen your right to vote has not always been guaranteed.  It was not until 1870 and the passage of the 15th Amendment that every male over 21 got the right to vote -- this was an effort to make sure that men of color could vote.  Women didn't get the vote until 1920 with the passage of the Nineteenth Amendment.  The 24th Amendment outlawed poll taxes, which tended to disenfranchise the poor and persons of color.  The 26th Amendment gave every citizen over 18 the right to vote.  The argument here was that if one could be drafted into a war at 18, you should have the right to vote.  The Voting Rights Act, enacted in 1965, empowered the Federal Government to intervene in places where voting rights were being suppressed.  The Supreme Court recently overturned much of the powers in that Act, allowing States to impose new burdens on the electorate. The right to vote was a hard won fight, let us not let it be lost.

So, how should you vote?  The other day my son reported seeing a sign that said:  "Vote Biblically." I saw it yesterday myself.  Apparently there's a "Vote Biblically Organization."  My sense is that the way this organization understands voting biblically would differ from my own interpretation. The issues that they emphasize might not be the same as my own.  But since they brought it up, perhaps there is a guide to how we should approach voting from a biblical point of view.  As Jesus reminds us there are two great commands -- love God and love neighbor.  The first command reminds us that we should have no idols, and that includes the nation.  The second command reminds us that our greatest concern should be the welfare of our neighbor.  Remember that if your neighbor is blessed, you probably will as well.

Oh, and there's that pesky statement in Romans 13 about being subject to the governing authorities -- and that there's no authority apart from God.  I think it's good to remember two things -- first, Paul was writing to people living under the authority of an oppressive Roman Imperial System.   Second, in our case, as laid out in the Constitution, we are the governing authority.  By our votes we determine who will  represent us in the government.  I think that's a good "biblical rationale" for the importance of voting.

So, by all means, go vote!!  It is your duty as a citizen.  And keep this verse from Jeremiah in mind as you do vote (prayerfully, I might add):

7 But seek the welfare of the city where I have sent you into exile, and pray to the Lord on its behalf, for in its welfare you will find your welfare.  (Jeremiah 29:7)