Can’t Go Back Home! -- Lectionary Reflection for Pentecost 6B 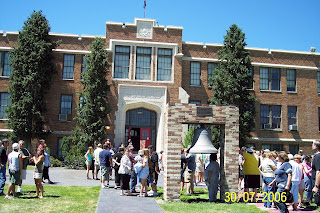 6 He left that place and came to his hometown, and his disciples followed him.2 On the sabbath he began to teach in the synagogue, and many who heard him were astounded. They said, “Where did this man get all this? What is this wisdom that has been given to him? What deeds of power are being done by his hands! 3 Is not this the carpenter, the son of Mary[a] and brother of James and Joses and Judas and Simon, and are not his sisters here with us?” And they took offense[b] at him. 4 Then Jesus said to them, “Prophets are not without honor, except in their hometown, and among their own kin, and in their own house.” 5 And he could do no deed of power there, except that he laid his hands on a few sick people and cured them. 6 And he was amazed at their unbelief.

Then he went about among the villages teaching. 7 He called the twelve and began to send them out two by two, and gave them authority over the unclean spirits. 8 He ordered them to take nothing for their journey except a staff; no bread, no bag, no money in their belts; 9 but to wear sandals and not to put on two tunics. 10 He said to them, “Wherever you enter a house, stay there until you leave the place. 11 If any place will not welcome you and they refuse to hear you, as you leave, shake off the dust that is on your feet as a testimony against them.” 12 So they went out and proclaimed that all should repent.13 They cast out many demons, and anointed with oil many who were sick and cured them.

It’s hard to go back home and have any real impact. I know that’s true for me. I loved growing up in my home town, but it placed limits on my ability to be myself. I had a reputation. It wasn’t a bad reputation; it’s just that not much was expected of me. I was sort of a face in the crowd. Going off to college opened up some new opportunities, but it was seminary that really opened things up. The old pecking order was gone, and I had an opportunity to start fresh. So, why go back home? Jesus may have asked himself that question after returning home to Nazareth.


Throughout the Gospel of Mark we see people struggling to make sense of Jesus’ identity. Even his disciples have trouble figuring him out. When they start to get a sense of who he might be, he tells them to keep it quiet. Adding to the mystique is the fact that the Gospel of Mark lacks both a birth story and a clear ending. Jesus just appears at the Jordan, where John the Baptist is holding forth, and then there’s that empty tomb and suggestions that he’s been resurrected—but no real encounter with the risen Christ.  We’re not totally sure where he comes from and where he has gone. That’s left up to our imagination and a great deal of faith.

The hometown folks think they know who Jesus is, and they’re not impressed. It would seem that when he was growing up, he hadn’t done anything that would make him stand out in the crowd. Unlike in some of the apocryphal gospels, this Jesus didn’t turn clay pigeons into live ones, nor did he strike down his playmates who got in his way. He was just like everyone else. Maybe he was even a bit shy. Obviously no one expected much of him. The way they speak of his family background suggests that he and his family weren’t part of the elite. They say of him that he was the son of Mary. They also point out that he has a number of siblings. What he seems to lack is a father. You have to wonder about that. Should we take the omission of a father as an insult? While Joseph is present in Matthew and Luke, his name doesn’t appear anywhere else in the New Testament. In a patriarchal culture, not having a father wasn’t a good thing. Being a Star Trek fan, my imagination goes to the Klingons, who define their identity by their relationship to a father: Worf son of Moeg. The same was true in ancient Israel. Carrying the identity of Jesus son of Mary was very different from being Jesus son of Joseph. For Mark, of course, Jesus is the Son of God (Mark 1:1), but that identity was in the process of being revealed. Mark ties the foundation of Jesus’ identity to his relationship with God not to a human father, but for the people of Nazareth, Jesus was missing an important identity marker, one that undermined their ability to receive his ministry.

He is a fatherless child—a state of being that did not promise much happiness in life. Then there’s this word about being a carpenter. In our context being a carpenter is an honorable profession (and often well paid). But was that the way it was back then? Perhaps you remember the scene from Mel Gibson’s The Passion of the Christ, where Jesus demonstrates his woodworking prowess. He makes a quite lovely table for his mother. In Gibson’s eyes Jesus is a master carpenter. But is this what Mark has in mind? For the most part Jesus’ vocation wasn’t highly prized in the ancient world.  To be a master carpenter in our day is to be somewhat of an artisan, but the word translated as carpenter here is tekton and it can just refer to a common laborer. Jesus was just like everyone else who grew up and learned a trade so he could support the family. He was ordinary with dubious origins. So, maybe that’s why he left home. There wasn’t much of a future for him as laborer, perhaps helping build the nearby city of Sepphoris (the leading city of the region, which never gets mentioned in the Gospels). Being a carpenter also wasn’t your typical starting point for a life of religious leadership.

Then he went away. Where he went, Mark doesn’t say. Did he go and hang out with John the Baptist or among the Essenes? Who knows? Mark doesn’t say! It’s sort of a secret that the hometown folks aren’t in on. When he returns home, having gathered together a group of disciples and has drawn attention of crowds in other Galilean towns, including Capernaum, the people aren’t ready to receive his message. Indeed, they are offended by it. Who is he that he thinks he can instruct us. It’s not what he says that is the problem—it’s who he is that’s the problem.

A prophet is without honor in his or her hometown. That’s just the way it is. So while Jesus could do amazing things in other towns, when he came home his work is limited. He heals a few people, but then he decides to walk away. The people don’t try to kill him—unlike in Luke 4—but they’re not ready to hear his message. And so off he went, his disciples following long.

Not being welcomed by his hometown, Jesus changes his tactics. He decides to split up his group of followers and he sends them out into the world to preach and engage in a ministry of healing. Nazareth may not benefit, but Israel will. Having left Nazareth, Jesus sends the disciples out two-by-two into the world. He tells them to live off the land. Just take one cloak, and then depend on the hospitality of the community. Nazareth may not receive him, but Israel will receive Jesus’ little army of prophets. If they’re welcomed they should bless the houses of their hosts. If not, then they should shake the dust off their feet and move on. In other words, there was no point in trying to engage communities that weren’t open to the message. Nazareth proved to be one of those places, so Jesus moved on to more fertile territory.

A friend of mine who is also a pastor and I were talking recently about something we both learned from Gil Rendle, a church leadership consultant who was affiliated for many years with the Alban Institute. He told the groups we were in that there are three basic groups in every church. About ten percent of a congregation will resist pretty much anything you suggest. Another ten percent will support just about anything you suggest. The other eighty percent are largely indifferent, but open to hearing your ideas. The problem, Rendle suggested, was that church leaders tend to focus all their attention on the ten percent that are against whatever it is you’re for, while the eighty percent walks away  frustrated by the conflict. Jesus could have focused his attention on winning Nazareth to his cause, but they “knew him to well,” and so Jesus moved on. There is wisdom in this, I think.

When the crew returned from their travels their reports are pretty amazing. This little group of twelve report their amazement of what they accomplished during this mission trip, for “they cast out many demons, and anointed with oil many who were sick and cured them” (Mk. 6:13). As Beverly Zink-Sawyer puts it: “The word for us in this text is that we are not held responsible for the response to our ministries in Christ’s name, but only for own faithfulness. With such assurance, we can witness boldly and faithfully” [Feasting on the Word: Year B, Vol. 3: Pentecost and Season after Pentecost 1 (Propers 3-16), p. 217].  To that I will add my amen!
Email Post
Labels: Acceptance Gospel Gospel of Mark Home Identity Jesus of Nazareth Lectionary Mission Pentecost Season