How Not to Kill A Muslim (Josh Graves) -- A Review

HOW NOT TO KILL A MUSLIM: A Manifesto of Hope for Christianity and Islam in North America. 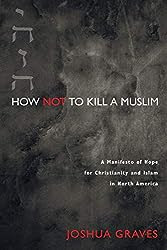 It is likely that we are not immune from making judgments based on stereotypes.  It's almost inevitable. The world is complex and complicated, and so we try to find ways to simplify the world by characterizing people and things. This requires us to prejudge people by making use of the assumptions of others.   Unfortunately, these characterizations are often incomplete or even untrue. Still, we make use of stereotypes to make sense of the world.

Many Christians, especially in the United States, have come to believe that Islam is by nature a violent religion that seeks to suppress women and encourages followers to take over the world. Now many Muslims have swallowed similar stereotypes of Christians. As a result, we approach each other (if we ever do so) in fear.

If we’re going to break free of our enslavement to unwarranted stereotypes, we need a competent guide. One of those competent guides is Josh Graves, a Church of Christ pastor living in metro-Nashville, who has ties to nearby Rochester College (Michigan).  The intriguingly titled book How Not to Kill a Muslim serves as a manifesto calling Christians as followers of Jesus to let go of our fear of the other and begin to enter into relationship with persons from the Islamic community, which is no more monolithic than the Christian faith. So, since God Muslims, there’s no need to try to kill them!

This is a relatively brief book, but it has great potential to enable Christians to build bridges to their Muslim neighbors. The book has its roots in Graves's D.Min. project at Columbia Theological Seminary. Throughout the book Graves invites us to examine ourselves, rooting out the biases that prevent us from building relationships. He writes from within the Evangelical community, which has tended to view Islam with hostility. In order to build relationships, we need to recognize that each faith community has its own story, and that we engage each other from the vantage point of that story. For Christians the primary story is to be found in Scripture, which appears to us primarily as narrative. Of this story, he writes: “Like a script that is incomplete until it is enacted in daily life—this is the meaning and place of Judaism’s Torah and Christianity’s New Testament, along with Islam’s Qur’an” (p. 2). The question he asks of us is what story we are trying to live out of. Unfortunately the stories we often embrace are rooted in fear, and fear “allows a toxic view of what might be to trump the beauty of what is and the life-giving potential of what could be” (p. 3).   With that in mind, Graves invites us to engage what he believes is one of the day’s most pressing problems—the relationship between Christians and Muslims.

If the Christian-Muslim relationship is a pressing concern, then Christians (the intended audience of the book) need to take stock of our Muslim neighbor and discern a better path for our relationships. The problem we face is that we don’t have much time for deep reflection, there is a bitterness towards Muslims that is embedded in the minds of many Christians, we’re susceptible to buying into stereotypes, and finally we tend to be underequipped to engage persons of different faith traditions. With regard to the last point Graves approaches the conversation hoping that those whom he engages with will come to experience the teachings and life of Jesus. He approaches the conversation as a confessional Christian.

The book does several things. First it addresses the common stereotypes, including the belief that Muslims are terrorists. Besides giving some history of the Islamic faith, he introduces us to the Participatory Action Research method to survey and discuss Christian attitudes toward Muslims. For instance, most Westerners assume that Muslims are Arabs and Arabs are Muslims, but while many Muslims are Arab, the majority are not, and while a majority of Arabs are Muslim, not all Arabs are Muslim. Especially since 9/11/01, many Americans, especially Christian Americans, view Muslims as adherents of an inherently violent religion intent on eradicating Christians and Jews (among others) in pursuit of dominion on earth. Having found a way to gauge the variety of views of Muslims, he focuses on two ways of engaging Muslims. The first is to embrace the message of the two great commands, including the call to love our neighbor. With that, he moves us to consider the story of the Good Samaritan.

The key to the book is really Graves’s engagement with the Good Samaritan parable, which signals Jesus’ openness to the stranger as neighbor. The parable illustrates love of neighbor. The question is, how do we read this parable? Graves points out that there are several layers of interpretation, beginning with one of the most common—the illustration of doing good. There is also the layer of love over purity, and that of justice or love becomes public. Each of these has its place, but Graves wants us to go deeper. This requires imagination, of getting into the ditch, and looking at the scene from the perspective of the person in the ditch. Whom would you rather not reach out and help you?  This parable is not primarily about doing, but rather about seeing. Whom do you see and where does that take you? With the parable's message of openness to the stranger, along with Jesus' teaching of the two commandments to love God and neighbor, we might be able to get beyond stereotypes and embrace our neighbors.

The book is brief, but extremely insightful and provocative. It speaks clearly to the Christian community, inviting Christians to begin seeing Muslims as their neighbors, whom Jesus calls on us to love. Besides the text, there are three appendices. The first offers a helpful glossary of terms, though I wish he had included Sufi in the list (and probably Ahmadi Islam as well). Secondly he reprints a blog post dealing with the building of a mosque near Ground Zero. Finally, he offers a report of two surveys he took regarding stereotypes. The questions asked using the Participatory Action Research (PAR) method focus on getting people to share their views of Muslims and other faith communities, the responses are provided giving you a sense of how these Christians perceived their Muslim neighbors.

At a time when many Christians are open to negative portrayals of Muslims, who see them as violent people given to terrorism, who see ISIS and Al Qaeda as being the true spirit of Islam, this is needed book.  Since he mentions other issues/persons who are viewed negatively, including gay persons, much of what he says about the way we live with biases are transferable. This is a most welcome book that can serve us well as we seek to build bridges across faith lines and overcome negative stereotypes that undermine the Christian witness.
Email Post
Labels: Christian-Muslim Relationships Good Samaritan Interfaith Relationships Islam in America Josh Graves love of neighbor Muslims Reviews Books