Seeing the New Creation -- by faith not sight 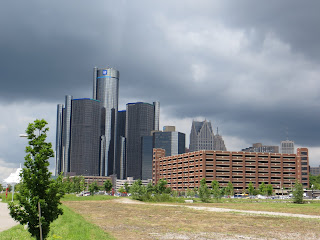 6 So we are always confident, because we know that while we are living in the body, we are away from our home with the Lord. 7 We live by faith and not by sight. 8 We are confident, and we would prefer to leave the body and to be at home with the Lord. 9 So our goal is to be acceptable to him, whether we are at home or away from home. 10 We all must appear before Christ in court so that each person can be paid back for the things that were done while in the body, whether they were good or bad.

14 The love of Christ controls us, because we have concluded this: one died for the sake of all; therefore, all died. 15 He died for the sake of all so that those who are alive should live not for themselves but for the one who died for them and was raised.
16 So then, from this point on we won’t recognize people by human standards. Even though we used to know Christ by human standards, that isn’t how we know him now. 17 So then, if anyone is in Christ, that person is part of the new creation. The old things have gone away, and look, new things have arrived!

As the weekend approaches, it is good to remember that for those who are Christians we live not be sight but by faith. As both the readings from 1 Samuel 15:34-16:13 (the text I’m preaching Sunday) and Mark 4:26-34 (the Gospel for the week – see my reflections from earlier this week) remind us – there is more that goes on below the surface that we can’t see, so we must takes things by faith.

The second reading – from the epistles – comes from 2 Corinthians 5:4-10, 14-17. In this reading we’re told that because we’re in Christ we should not look at people through human standards (in 2 Samuel that involves looking at the heart and not the externals), but instead we should recognize that in Christ we are part of a new creation.  Paul reminds us that the old things have disappeared, and the new has arrived. There is more to this story that emerges from the remainder of 2 Corinthians 5, but this message of a new creation has long been a key verse for my own life. My life, my hopes, my dreams are not determined by what was. The future is open. There is hope and there are new opportunities.

Living in metro-Detroit for the past seven years, I've become quite aware of what this might mean. Once Detroit was counted among the great cities of the nation. It was the industrial heart of the nation, being the center of the world’s automotive industry. In recent decades Detroit has fallen on difficult times. The city that lies to my south went through bankruptcy.  Things looked dire. If you drive through the city you’ll see much evidence of the decay and despair that present in the city. But there are seeds of hope that have been scattered across the region. I’ve been blessed to be a part of some of these efforts.

Many people have said that Detroit has no future. The best days are behind it. But I hear something different. Rather than living by what I can see with my eyes, I can live by faith and embrace the new creation that is emerging around me.

I use Detroit as an expression of what is true of faith. There are many times and places when we're tempted to give up our dreams and hopes, but then here Paul reminds us that the old ways are gone and there are ways emerging – for in Christ, we are part of a new creation.
Email Post
Labels: 1 Samuel 2 Corinthians 5 Detroit faith Gospel of Mark hope New Creation Reflection