Christ and Culture -- A Sermon for Pentecost 2B 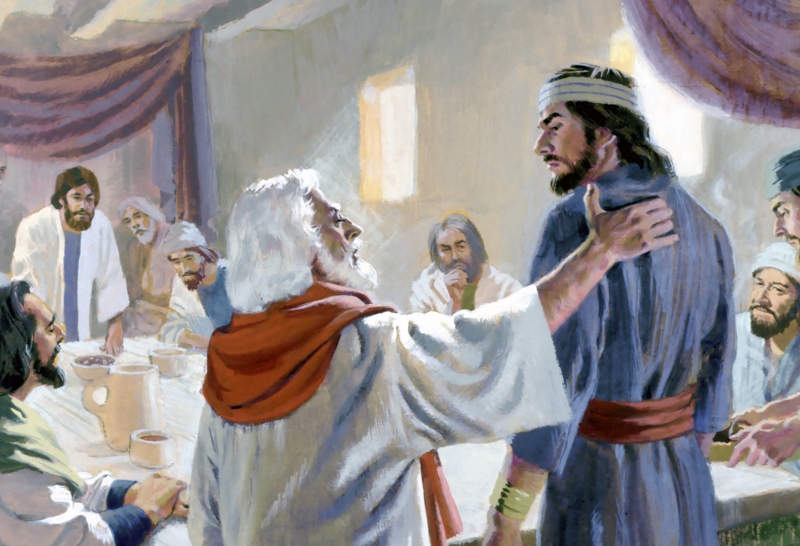 The Elders of Israel went to Samuel the prophet and judge, and told him it was time for a change in leadership. Yes, it was time to retire, and since his sons weren’t up to the job of leading them, they wanted a king, so they could be like all the other nations.  Apparently Samuel wasn’t thrilled with their request and so he complained to Yahweh. Yahweh told Samuel that the Elders weren’t rejecting Samuel’s leadership; they were rejecting Yahweh’s kingship.  While Samuel might have hoped for more backing from God, Yahweh told him to give the people what they wanted.  But, Yahweh told Samuel to warn the people about the downside of having a king.

If they had a king, the king would want to control their lives. A king would draft their sons to serve in the military, take their crops and flocks, and essentially make them slaves.  Yes, as Louis XVI put it in Mel Brooks’s History of the World, Part 1: “It’s good to be the king!”

Since the people feared the Philistines more than having a king – that is a king besides Yahweh – Samuel went looking for just the right person. Along the way he ran into a young man named Saul from the tribe of Benjamin who was looking for his donkeys. Saul seemed to have everything you could want in a king. According to Scripture he was “a handsome young man. There was not a man among the people of Israel more handsome than he; he stood head and shoulders above everyone” (1 Sam. 9:2).  Saul looked the part!  What more could the people want. Besides, he even spent time with the prophets sharing in their ecstatic experiences, so he was even filled with the Spirit. Yes, Samuel had found his man!

The lectionary reading for today begins in chapter 8, but it concludes with a few verses from the end of chapter 11, which I’d like to read for you:

Everyone was happy. The people are happy because they had a king just like everyone else.  Saul is happy because now he doesn’t have to chase after donkeys, like he did when he lived at home working for his father. Now, he gets to be in charge. Yes, things were looking up for everyone, except maybe Samuel!

It would appear that Samuel isn’t thrilled by this turn of affairs. While he still has priestly duties to attend to, and he’ll continue serving as an advisor to the new king, he’s not sure that this new arrangement is going to work out well.  But it’s out of his hands. The people had made their decision. They had their king. He was young, tall, and handsome, and he was someone in whom they could take pride. It just seemed like life would be good from here on out!  Of course, as any political scientist can tell you, simply changing leaders, or even political systems, won’t necessarily change the realities of life!  Such is the tale that gets told in 1 and 2 Samuel.

During this summer season I’m going to be following the lectionary readings from these two books, which cover the reigns of Saul and David.  You will recognize many of these stories, which make for great drama. But as we hear these stories, we need to ask the question: What do these stories have to say to us today?

Some years back, Reinhold Niebuhr’s brother Richard wrote a book in which he suggested that there are five ways in which Christ could relate to culture. I’m not going to get into these different stances, but the story of Saul and Israel raises important questions about the way in which we as church relate to our culture.  Do we resist it and try to fight culture wars?  Do we separate ourselves from the culture around us like the Amish? Do we simply allow the culture to form us into a civil religion? Or do we seek to somehow transform the culture around us without imposing our will on other people?

The leaders of Israel came to Samuel and demanded a king so that they could be like everyone else. They essentially wanted a system where religion served the national interest, and for some reason that didn’t make Yahweh happy. So, why is that?

Perhaps it’s because back in the time of Samuel and Saul, kings weren’t just political figures. They were religious figures as well. In fact, many of Israel’s neighbors believed that their kings were divine. So, if Saul was going to be just like all the other kings in the neighborhood, at the very least he was going to be the chief interpreter of the things of God.  Biblical theologian Walter Eichrodt put it this way: Saul “could set himself up as the infallible expositor of the divine will in opposition to those who had been agents of the Spirit in the past” (Theology of the Old Testament, Volume One (The Old Testament Library),

441).  As king, Saul could decide what God could do or couldn’t do.  And since a monarchy is usually a hereditary office, a king is free of the control of the Spirit.

Saul’s story seems to take a wrong turn soon after that big coronation event. Being king may have gone to his head. Maybe he got to thinking that his authority didn’t come from the Spirit, but maybe from his own divinity. After all, that’s how the other kings saw themselves. If they were divine, why not him?  As time went on, Saul stopped listening to Samuel, the Spirit left him, and he seemed to fall into insanity. And as we’ll see next week, Samuel quickly began looking for a replacement.

Could it be that it’s appropriate that we’re reading this passage on the same day we’re holding our congregational meeting to elect our leaders for the coming year? After all, it’s easy for the church to rely on institutional rules to determine leadership. We have offices to fill, and we need bodies to fill them. The Council sets up a nominating committee to go and find those bodies. The question is – how do we go about this? Does it matter whether the person we’re asking to take on this role has the gifts or passion for the position, or are we simply trying to fill a slot as quickly as possible? Do we ask a person to pray for discernment about whether they feel called? Or do we ask for an immediate answer? Saul seemed to fit the bill. He looked like a king and he was willing to take the job, but did he have the gifts and calling of God?

There’s another element to this story that we need to explore. Remember that when the people asked for a king, they wanted to be like all the other nations. Remember that Yahweh took this to be a rejection of his kingship. It seems that when the Elders asked for a king they weren’t just seeking a replacement for Samuel, they were also implying that Yahweh wasn’t doing a good enough job protecting them. They wanted a more visible leader, who could lead them in battle against the Philistines. They might be willing to offer sacrifices to Yahweh, but in reality they wanted someone they could see and hear to be their leader.

While a king might provide stability and security; stability and security don’t come cheap!  This past week Congress debated about whether to extend the Patriot Act, let its provisions expire without replacement, or create a new authority to replace the expiring provisions, which included having the NSA gather telephone data. The debate focused on how much freedom we’re willing to give up in exchange for stability and security? That’s the question the people of Israel were facing. How much freedom were they willing to give up in exchange for security? This involved the question of allegiance: Is it God or is it the king?  Is it culture or is it Christ?

It is said that many Christians live as atheists from Monday through Saturday. We go about our business without giving much thought to God’s call on our lives. That seems to be what’s going on in this story. The people wanted a king because they no longer recognized Yahweh as their king. Saul got into trouble when he stopped looking to God for direction.  While our culture may not have kings like in the days of yore, in many ways, in American life, we’re all kings and queens. We claim dominion over our own destinies. The question is – where does this leave God?