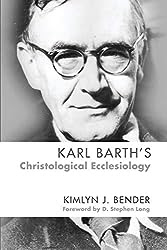 Karl Barth continues to influence Christian theological conversation long after his death in 1968. Even if the heyday of Neo-Orthodoxy is long past, you cannot do theology even today without at least taking stock of his work.  His influence is especially felt among the Post-Liberals, but many progressive Evangelicals have found him to be extremely influential. I know that my own theological development during my seminary years took place in conversation with his theology (I was fortunate to take a Barth seminar with Geoffrey Bromiley, who translated much of Barth’s work into English).  In the end, one needn't be a Barthian to learn from him. You just have to be open to engaging his ever evolving system.

While Barth’s written corpus is much larger than his Church Dogmatics, this theological enterprise that emerged over many decades, is the most important expression of his theology.  As one might expect, he devoted considerable energy to ecclesiology, much of it appearing in the four part volume four, which focuses on reconciliation.  Trying to navigate his work is not easy, and so it is good that Kimlyn Bender, a theology professor at Truett Seminary/Baylor University, has written what I believe will be the definitive guide to Barth’s ecclesiology for the foreseeable future.  This book, published by Cascade Books (Wipf & Stock) offers us a new paperback edition, making it more accessible than the earlier (more expensive) hardback version published by Ashgate. The fact that Wipf and Stock chose to publish it under its top Cascade label, which is almost always a brand new book, rather than the Pickwick or Wipf and Stock labels suggests that the editors at the publisher believed this needed a wide audience.  For the most part I am in agreement with them, for Barth is a worthy conversation partner as we seek to better understand what the church will look like in the coming decades.

Not surprisingly Barth developed his understanding of the church in light of his Christology. With a Christocentric framework governing his theology, Barth's ecclesiology emerges out of the same milieu. Bender has done a wonderful job drawing out the Christological foundations, while also helping us see the full Trinitarian and even pneumatological elements. Bender suggests that the Christological pattern has three elements. First there is a Chalcedonian pattern, with both divine and human natures. The second element continues the examination of the Chalcedonian pattern by pointing out its asymmetrical nature, so that the divine element remains free and its dignity preserved. Third, he speaks of the correspondence of the human with the divine, so that the human mirrors the divine.

The ecclesiology is largely worked out in the context of Barth’s understanding of reconciliation. Much of the work on the church is found in the fourth volume (4 parts) of the Church Dogmatics. For Barth, one cannot understand the purpose of the church outside, Christ’s work of redemption (atonement). The church is not the means of redemption, for Christ is the means, but the church has its place and the community in which the event of salvation is experienced (at Christ’s pleasure).

For Barth there is always a dialectical tension to be observed, so that we must attend to both visible and invisible, or the church as event versus the church as institution. Both are present. Both are important. Both are related, with the visible, for instance mirroring the invisible. As one who lives within a free church/congregationally governed church, I was especially attentive to his arguments for the centrality of the local expression of the church.

This is written as a scholarly exposition of Barth's ecclesiology. He takes us from Romans to the end of the Dogmatics. He helps us see the development of his thought leading in the end to a full embrace of a free church/congregational model. Believing that the church is truly event, it is most truly present in its local manifestations. While focusing on Christology, Bender helps us see how Barth included the Spirit in the development of the ecclesiology, as well as how all is connected to his Trinitarian vision. The pneumatological element helps provide for a sense of freedom in his ecclesiology, so that the church should be ever reforming and never static. Even the creeds are not to be seen as final.

As one might expect, Bender points out that Barth's ecclesiology is both rich and complex. He weaves a diverse set of theological and practical strands together, so that it's not easy to classify his ecclesiology, which is as he would have it. Bender suggests that while some have accused Barth of creating an ecclesiology that lacks concreteness, in reality Barth's vision may be too concrete and too demanding to experience to be received. There is in Barth a desire for the church to be truly present as a community of the faithful.  Barth isn't interested that much in creating a stable institution, for the church, while truly concrete and visible, is also an event. The church is ever reforming and reformable, so that change should always be expected. Thus, Barth may not find too many takers among those seeking stability --- but for those looking for something different Barth may prove to be a useful guide.

This is an excellent analysis and summation of Barth's theology of the church, including his vision of ministry (non-hierarchical, gifts-based, priesthood of believers, model). It's not an easy read, but what would you expect from an attempt to interpret one of the deepest and enigmatic theologians of the modern age
Email Post
Labels: Books Chalcedonian Christology Christology Congregationalism Ecclesiology Free Church Karl Barth Kimlyn Bender Pneumatology Reconciliation Reviews

Steve Kindle said…
Bob, I'm wondering if Barth's opposition to "religion" is not behind this conclusion: "Thus, Barth may not find too many takers among those seeking stability." Stability (perhaps status quo?) may just be another way of maintaining the Christian "religion" as opposed to a faith-full relationship with God. What do you think?
11:49 AM

Robert Cornwall said…
Steve, his rejection of religion is part of this. Barth isn't opposed to institution -- that is, to visible presence of church. What he doesn't want to do is make the visible the essence so that it is beyond reform. He is very much a congregationalist, however, and a free church advocate. So he stands against the traditional European model of a state church.
12:44 PM