Isaiah for Everyone (John Goldingay) -- Review 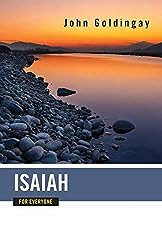 The book of Isaiah has long been a flashpoint of controversy within the Christian community. There are several reasons for this. One has to do with authorship. Was there one author, an eighth century prophet in Judah who answered the call of God in the year that Uzziah died (Isaiah 6:1), or were there several, some of whom lived in the post-exilic world? References to Cyrus were seen by some as proof that Isaiah was truly a prophet who could foresee events centuries ahead of time.  This becomes important because Isaiah has been looked to for prophetic insight into the coming of Jesus the Messiah. Thus, the translation of Isaiah 7:14 has proven to be a matter of great concern. Was the prophet pointing to a person born to a virgin or was he speaking of a young woman, perhaps the wife of the king, who was about to bear a son who would be seen as a sign of hope for the people of Israel? It’s good to remember that in the 1950s conservative Christians burned copies of the Revised Standard Version because the translators chose not to use the word virgin in that case, understanding this to have a more immediate context. What Matthew would do with it later on was a different matter.

There continue to be readers of Isaiah who hold both to a single Isaiah and the older use of the word virgin over young woman. John Goldingay is not among them. Goldingay is the David Hubbard Professor of Old Testament at my alma mater—Fuller Theological Seminary. He came to Fuller after I had finished my studies, so I didn't have him as a professor, and therefore I can only speak of him in regards his written work. Goldingay is a British evangelical Anglican (Episcopalian in this country). From what I’ve read of his work he is a mainstream biblical scholar committed to an evangelical understanding of the Christian faith. Like N.T. Wright, who has authored the New Testament version of the series in which this commentary appears, he is rather centrist. He wants to attend to scholarship, but is committed to what some might call traditional or orthodox Christian faith.  Thus, on the matter of Isaiah 7:14 Goldingay writes:

If she is at the moment a virgin, she will be an unmarried girl who is going to marry and conceive in the usual way. We don’t know who the girl is—indeed, Isaiah doesn’t need to have a particular girl in mind. The point is that by the time a few months have passed and the girl has had her baby, the crisis that preoccupies Ahaz will be over. It will have been proved that “God is with us,” and she will be able to call her baby God-is-with-us, Immanuel. (p. 34).

This particular contribution to the Old Testament for Everyone series from Westminster John Knox Press, focuses on Isaiah. As is true of other contributions to this series that stands as a successor to the earlier Daily Bible Study series, the book is devotional and not scholarly in focus. It is meant to be accessible for the lay person without advanced training. It is written in a very personable style, with each portion of the text under consideration prefaced by personal comments that derive from some event or concern of the moment. Maybe he has gone to church that day or is preparing for a class. He mentions his wife (his first wife died while he was finishing an earlier contribution) regularly. You get the sense at times that this is a fairly free-flowing, almost extemporaneous reflection. It reminds me of my own weekly devotional posts. It seeks to bring out key points that have importance for the contemporary situation.


Isaiah, as I’ve already noted, is an ever challenging book. It is among the longest books in the Bible. It was produced over a long period of time. It addresses important questions of theology and social justice. There are words of judgment and words of hope as well. There are beloved sections, especially the servant songs. There are a number of call passages, including Isaiah 61, which provides the foundation of Jesus’ own call in Luke 4. Having reflected on a conversation with a student at Fuller struggling with a sense of call, he notes that with the prophets there was little room for wondering about whether the call was there or not:

This particular account starts with the sense of Yahweh’s spirit or breath or wind being on the prophet. It’s unlikely to have been a gentle experience or one hard to discern. Yahweh’s breath blows you over and leaves you without options. (p. 234).

As you read this volume, you get a sense of how far evangelical Bible scholarship has come in recent decades—without a wink or a nod, Goldingay accepts the premise that Isaiah has multiple authors, who were active/prophesied/wrote over a period of several centuries, beginning in the 8th century and concluding some time after the end of the exile. Goldingay identifies six separate sections within the book: Chapters 1-12 comprise messages about Judah and Jerusalem during the reign of King Ahaz. Chapters 13-23 focus on the surrounding nations, giving reference again to Ahaz. Chapters 24-27 give attention to the destiny of the world without referencing a particular monarch. Chapters 28-39 feature messages about Judah and Jerusalem, giving reference to Hezekiah. In the next several chapters we jump well into the future. Chapters 40-55 feature messages about Judah and Jerusalem, while referencing Cyrus, the Persian monarch who conquered the Babylonian empire at the end of the 6th century BC. It was Cyrus who allowed the exiles to return home and eventually rebuild their city. This Cyrus is pictured in near messianic terms. Finally in chapters 56-66 we find discussions of Judah and Jerusalem, but no particular monarch being mentioned.

The commentary features a fresh translation that is free-flowing and modern. Familiar passages, thus, don't always sound as familiar as they might. He uses Yahweh where older translations use Lord (Adonai) and where reference is God Almighty he uses the direct translation of Yahweh Armies, which is a favorite in the early part of Isaiah. As I noted Goldingay begins each section of the commentary with a brief personal aside that normally fits what is to come. The commentary is not exegetical in format, but is instead meant to be read devotionally.  There is almost an extemporaneous sense to the commentary, with Goldingay getting up in the morning and finding a personal connection with the text, and then he gets down to business. Now, at least with Isaiah Goldingay has some considerable experience. He has written other more exegetical commentaries on Isaiah [eg. Isaiah 56-66: A Critical and Exegetical Commentary (International Critical Commentary)], as well as a book on the theology of Isaiah [The Theology of the Book of Isaiah: Diversity and Unity]. This is a book with which he is very familiar and thus able to guide our conversation.


What we have is a very readable, thoughtful, theologically moderate commentary that should be especially useful for Bible study groups. Preachers might get some help from this, but for deeper questions they will want to look elsewhere.  Like William Barclay’s commentaries of an earlier era, there is much to like about these thoughtful volumes.
Email Post
Labels: Commentaries Devotionals Isaiah John Goldingay Old Testament Reviews