THE DISCIPLES AT THE LORD’S TABLE (Gerard Moore) -- Review

THE DISCIPLES AT THE LORD'S TABLE: Prayers Over Bread and Cup across 150 Years of Christian Church (Disciples of Christ) Worship. By Gerard Moore. Eugene, OR: Pickwick Publications, 2015. X + 106 pages. 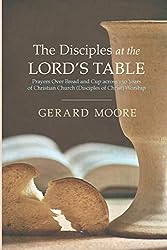 It would be appropriate to call the Christian Church (Disciples of Christ) a Table-centered communion. From our earliest days as a movement, which spans at least three major groupings in the United States, we have gathered weekly at the Lord’s Table (if not more often). The symbol that represents the denomination is a red chalice with the St. Andrew’s cross imposed upon it. Our liturgy of the Table tends to be simple and among major denominations the Disciples are unique in that they do not require an ordained minister present at the table to consecrate the elements. Indeed, until recently the table was the domain of lay elders. Today most Disciples churches will have the Minister preside, offering the words of institution, while elders will offer the prayer over the elements.

Although there are similarities between contemporary practice and that of the early 19th century, Disciple practices have evolved over time. Gerard Moore, a Roman Catholic scholar from Australia who has made worship the focus of his own studies, has chosen to examine Disciple practices, their liturgies, and their theologies of worship and the Eucharist. It might seem odd that a Roman Catholic would focus attention on the Disciples, but even if the practices and the theology are different, the two communions share in common a focus on the Table. It appears that this book is a revision of a master’s thesis written at Catholic University of America some years ago (Keith Watkins who is one of the objects of Moore’s attention remembers reading that thesis) under the guidance of important Catholic liturgical scholars.

Moore’s book covers a period of around a hundred and fifty years, beginning with the practices of Alexander Campbell and moving through history to the ending with the publication of Thankful Praise: A Resource for Christian Worship in the late 1980s. Moore begins his book with a brief historical introduction to the Disciples, giving attention to the early leaders along with those elements that influenced Disciples thought and practice, including its Scottish Presbyterian/Reformed roots and the Enlightenment vision of John Locke. Then he moves into the meat of the book, the four chapters that introduces readers to the basic elements of Disciples Table practice, looking at suggested communion prayers (there has never been a prescribed Disciples liturgy) and worship orders. What is of interest to Moore is the theology that is reflected in both prayers and liturgy.

As would be expected he begins with the earliest leaders, primarily Alexander Campbell, whom he considers the most important “in terms of theological output, writing and publishing, and leadership” (p. 6). He notes that Campbell shows the influence of Locke as he pursued a "'reasoned' approach to the biblical 'order of things' at the Lord's Table,” but he also shows evidence of his Reformed heritage as well, finding parallels to the Geneva and Westminster Directories. One of the important insights here is that Campbell believed that the Lord's Supper was an essential observance, to be celebrated weekly. At the same time, he believed that the Supper was an independent ordinance, which meant that the order in which it fell in the service was irrelevant. This perspective would continue to dominate Disciples thinking and practice up to the creation of Thankful Praise. From the beginning he notes that Elders were called upon to preside, though Campbell believed that they should be ordained. Clergy were not necessary then and continue to be unnecessary, even if it is standard practice to have clergy at the Table.

Moore moves on from Campbell to second and third generation leaders who created worship manuals. These manuals, which were produced from the late 19th to the early 20th century, didn’t carry any official weight, but they do show how Disciples were moving beyond the frontier simplicity of the first generation. He examines five different manuals published during this period, including those created by such luminaries as J.H. Garrison and Peter Ainsley. What he notices in these manuals is that the simplicity of worship found in Campbell's directives gives way to more complexity and the presence of musical instruments including the organ. While Elders continued to be the presiders at the Table, we see during this period a stabilization of practice. In his mind, Moore believes that the fact that worship was now being intentionally planned meant that there was more variety and freedom than was possible with the earlier spontaneity. He notes that the structure of the worship in the manuals is close to that of the Reformed Tradition, as is the theology found in the prayers, sermon outlines, and directions” (p. 54). He also notes, however, that there is still an underdeveloped sense of the calendar, so that there was more thematic approaches than calendar ones.

The final two chapters (four and five) focus on the post-war era developments. Moore examines the worship books created by G. Edwin Osborn (father of Ronald)—Christian Worship: A Service Book—Thomas Toler’s elder’s manual, and Thankful Praise, edited by Keith Watkins and Ronald Allen.  Osborn’s book would be the semi-official worship book from the time of its publication in 1953 well into the 1980s. Toler’s The Elder at the Lord’s Table was published in 1954, and continued to be published by Bethany Press into the 1980s (I should note here that I served with Tom Toler after he became interim minister part way through my seminary internship year).  These two manuals were the dominate sources for clergy and elders until the publication of Thankful Praise in 1987 (I should note as well here that both Ron Allen and Keith Watkins are personal friends).  In these chapters Moore seeks to show two things, first the increasing stabilization of worship provided by Osborn’s book and the increasing ecumenical influences seen in Thankful Praise. In other words, Osborn and Toler are more traditionally Disciple than is Thankful Praise, which shows the influence of the liturgical renewal movement, the Baptism, Eucharist, and Ministry discussions of the Faith and Order Movement, and the work of the Consultation on Church Union. During this period we see a change in philosophy and theology of the Table. The minister is expected to preside at the Table. It is expected that the Lord’s Supper will follow the Sermon, and that the elements of worship will be integrated. Earlier Disciples thinking, which is found in Osborn assumed that the Lord’s Supper was essential, but its placement was not a major concern. While remembrance remains part of the Eucharistic prayer, we see more emphasis on invoking the Holy Spirit (epiclesis) on elements and people, so as to emphasize the presence of Christ. From Moore’s perspective this is movement in the right direction, but he finds inconsistencies in the presentation.

Whereas chapter four focused on the elements themselves, in chapter five Moore focuses more on the evolving Eucharistic theology as the church moved from Osborn to Watkins/Allen. While true to Disciples and Reformed traditions Thankful Praise goes much farther in placing Disciples practice in the broader tradition of Eucharistic theology. He writes that Thankful Praise is not simply a liturgical book with a different theology of Eucharist, but a liturgical resource that has attempted to re-appropriate the context and form of Eucharistic praying into Disciples worship." (p. 93).


This book is brief in pages but is, I think, a valuable resource for Disciples.  I believe that it can be a welcome resource for clergy and lay leaders, especially Elders, who may not know the history of our Eucharistic developments. It should be noted that Disciples have always given congregations freedom to develop their own services and theologies. Even a book like Chalice Worship is not an official standard. There are plenty of congregations that continue the patterns of the Osborn era, and others that move in different directions from Watkins/Allen. I should note that my own liturgical inclinations are of the same vein as Watkins/Allen. Nonetheless, it is helpful to examine from whence we came and where we might be heading. Oh, and there is an additional benefit to this book. It is often helpful to get the perspective of someone outside your own tradition. That this evaluation is offered by a Roman Catholic liturgical scholar makes this even more helpful.  So if you’re a Disciple, please read and consider the message of this book—that “the liturgical practice of the Disciples remains free, yet there are lines of convergence from historical practice that shape how this freedom is taken up and developed” (p. 102).
Email Post
Labels: Alexander Campbell Books Christian Church (Disciples of Christ) Clergy Disciples of Christ Elders Eucharist Keith Watkins Liturgy Lord's Supper Prayer Reviews Ron Allen Worship