The Spirit of Grace (Alister McGrath) -- A Review

THE SPIRIT OF GRACE: A Guide for Study and Devotion (The Heart of Christian Faith).  By Alister E. McGrath. Louisville: Westminster John Knox Press, 2015. X + 115 pages. 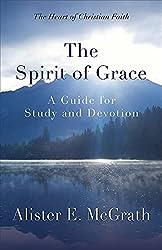 With this volume Alister McGrath nears the close of his five volume The Heart of Christian Faith, which offers a basic introduction to what one might call traditional/orthodox Christian faith as outlined in the Apostles Creed. The first book in the series—Faith and Creeds

—laid out the value and purpose of the creeds.  McGrath starts with the premise that what one believes is important, for belief forms the foundation of one’s world view, which allows for the moral life to be experienced. McGrath, who serves as the Andreas Idreos Professor of Science and Religion at the University of Oxford insists that faith as outlined in the creeds provides an anchor for life.

McGrath is an interesting person. He’s a British evangelical, an Anglican Priest, a theologian, and a scientist (his first educational experiences were in the sciences, and only later did he turn his attention to theology). McGrath is in many ways a contemporary version of C.S. Lewis (only much better educated theologically), who has made his mark on communicating often complex theological concepts to a lay audience, offering up what Lewis called Mere Christianity.


In the five chapters of this book, McGrath focuses on the Holy Spirit and the Church, the final declarations in the Apostles Creed. He bundles with his discussion of the Holy Spirit, whom the creeds declare to be the “Lord and giver of life,” and whom he speaks of as being the breath of God. Central to the discussion here is his affirmation that God continues to be active in the world.  With the Spirit seen as God’s continuing presence in the world, McGrath looks at the way in which the biblical story, both Old and New Testaments witness to the person and presence of the Holy Spirit. He takes note of the growing influence of the Charismatic and Pentecostal movements, giving affirmation of their witness while taking a more traditional view.

With the discussion of the Holy Spirit being the foundation, he moves on to the doctrine of humanity (theological anthropology). McGrath notes that he could have examined the topic of humanity in the context of creation, but by putting the conversation here he can affirm the idea that God breathes life into humanity -- "not merely in creation, but throughout our lives" (p. ix). He addresses such questions as the meaning of the “image of God, whether there is a soul, freedom, and the problem of sin. From there he moves to grace, which he believes is communicated to humanity through the work of the Holy Spirit. He affirms the promise of grace—that we can take solace in God’s graciousness. And it is in this context that McGrath the historical theologian points us to the debate between Augustine and Pelagius about the nature of grace and our ability to do what is right. He sides with Augustine but gives Pelagius his due, noting that Pelagius simply wanted to reform Roman church life, which he found scandalous. Augustine for his part was more realistic and affirmed grace.

The final two chapters address the doctrine of the Church. Chapter four focuses on the concept of the church as the communion of the saints. He examines the concept of the church as community and assembly, along with other traditional models of the church. In the closing chapter he meditates on the Creed's declaration that the church is one, holy, catholic, and apostolic. McGrath examines each of those declarations, reflecting on what they have historically meant and how we can embrace each of these four declarations today. For McGrath the church is at its base the communion of the saints, including those past saints, the people of God in the present, and finally the church that is to come. Indeed, the church is essentially a colony of heaven: “In its worship and prayer, the church speaks the language of heaven. Although we live on earth, we observe the customs and values of our real homeland. Christians thus live in two worlds and must learn to negotiate their boundaries” (p. 109).

In closing the book McGrath announces where the series will end. The final volume will be entitled The Christian Life and Hope, where he promises to show us “how the creeds give us a framework for Christian living, as much as for Christian believing” (p. 110). In other words, he will take us from orthodoxy to orthopraxis.


When taken together the series, at least as it has been published, offers the church a solid, moderate, traditional reflections on the Christian faith in the Spirit of Lewis’ Mere Christianity. It can be used, in my mind in many different settings, offering a readable foundational statement from which further discussions can be undertaken. For many progressive Protestants McGrath’s books might seem a bit conservative, but they are written in such a way that they can be used even by such congregations as a way of introducing persons to basic beliefs (belief may ultimately be about trust, but there must be some substance to that which we are putting our trust in).  Indeed, they offer people a solid baseline from which deeper study can be undertaken. If I were to offer any suggestion for improvement, it would be to suggest that a study guide/discussion questions be added.
Email Post
Labels: Alister McGrath Apostles Creed C.S. Lewis Church Grace Holy Spirit humanity Mere Christianity Reviews Theology