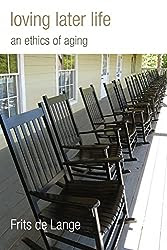 Like many mainline pastors I have in my congregation a goodly number of older persons. Many have children my age, so they could be a parent to me. I've not reached old age yet, but having reached my late fifties, I am becoming more cognizant of my own aging self. I'm not as young as I used to be! My hair is gray, my joints stiffen up, and the flesh isn't nearly as supple as before. By the world's standards of beauty, I'm past my prime. We can try to stave off aging, but it will eventually catch up with us, whether we're ready for it or not. As I wrestle with my own aging, I must also be attuned to my aging congregants, quite a number of whom are in their 80s. I'm amazed at times how vibrant some of them are. They keep on going. They stay active. But time is not on their side.

While I've not finished the book yet, so this isn't a book review, I have found Frits de Lange's book Loving Later Life: An Ethics of Aging, (Eerdmans, 2015) to be an incredibly enlightening read. I will be reviewing it soon as I'm almost done with it, but I wanted to share an important word that the spoke to me. That word is -- if I am to love the elderly, especially the frail elderly (what he calls the 4th age), then I must love my own aging self. He sets up the whole question of loving the elderly by exploring the ethics of love, including the Golden Rule.  He writes:

In the admonition to love our aging self, the command to love not only offers a normative ethics but may also explain why caring about the elderly is such a difficult thing. My contention is that we do not love our own aging, we do not love growing old, and thus, in general, we do not love old people. There is a deep-seated aversion toward aging -- and consequently toward old people -- that is widespread throughout human culture. Evolution gave us a spontaneous care instinct for the bodily needs of vulnerable babies, but it left us without such an instinct toward vulnerable old people. On the contrary, the idea of old age is horrific disgusting, and tainted by mortality has a long history in Western classical traditions as well as in Eastern cultures. Simone de Beauvoir was undoubtedly correct when she said: "If old people show the same desires, the same feelings and same requirements as the young, the world looks upon them with disgust: in them love and jealously seem revolting and absurd, sexuality repulsive and violence ludicrous." Old people may be stereotyped positively as exemplars of virtue or negatively stigmatized because of their vices. "In any case, either by their virtue or by their degradation, the stand outside humanity." [Loving Later Life, pp. 62-63].

If we cannot love ourselves as aging people we are likely unable to love the elderly. Why, because they serve as reminders that this is our future, and we would rather not face that fact. We would rather embrace the lure of being young.  For many people the early retirement years, perhaps up to the mid 80s offer the opportunity for being active and in firm control of one's own life, but eventually we come to that point in life where we lose our ability to control our lives and become increasingly dependent on others. That is, as I've discovered from my many conversations with older persons over the years is very scary. But by loving our own aging selves, we are in a better position to be of support to those who find themselves increasingly dependent on others.

I will share more on this once I am able to review the book.
Email Post
Labels: Aging Frits de Lange Human Beauty Love love of neighbor Love of self Ministry