Sex and Marriage Go Together -- Part 2 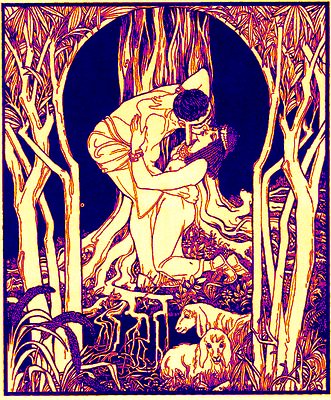 
Our focus here is on the role of sexuality within marriage, and while the Song of Songs (or Song of Solomon) can be interpreted allegorically for a spiritual purpose -- speaking of the love humans share with God -- that is not the original intent of these songs.  They celebrate human love that is expressed physically.
The woman speaks to her beloved:   “I am my beloved’s, and his desire is for me.”  She celebrates the mutual attraction that binds the couple together.  Seemingly out of step with the culture, the woman also takes the lead in the relationship.  She invites her beloved to walk through the fields and the gardens, where life is lush and fruitful, to a place where she says “There I will give you my love” (Song of Songs 7:10-12).  The sharing of love here is physical.  It is, to use a Greek term, eros.   She is going to show him a good time.  But this isn’t just a momentary fling.  It is much more than that.


In the chapter that follows, the woman sings of the becoming the “seal upon your heart.”  It is a covenant statement – and it is a covenant that extends to death.  Yes, the passion that she sings of is so strong, so powerful, that it is “as strong as death.”  It is a “passion fierce as the grave” (Song of Songs 8:6).   The sexual relationship that is celebrated here is powerful.  It compares with the grave.  It’s something to be taken seriously.  Wedding vows have, traditionally, included the phrase: “until death do us part.”  This is a vow, a covenant that is intended to last till the end of one’s life.

The singer declares that this love is like a “raging flame” that is so powerful, that “many waters cannot quench love, neither can floods drown it” (Song of Songs 8:7).  You can understand why Augustine and others would turn to these words to describe the relationship with God.  It is so powerful that it overwhelms us.  Therefore it can’t be taken lightly.

The power of the sexual relationship raises questions about how one expresses oneself sexually.  In “biblical times” it was assumed that one should not, or at least women should not, be involved sexually outside of marriage.  Adultery was contrary to the Law of God.  It was a form of breaking a covenant relationship.  While women more than men were held responsible in earlier days, today we would want to make sure the prohibition against breaking the covenant of marriage goes both ways.  What makes things different today is that there is a growing sense that sex is a normal human experience that due to contraception has been separated out from procreation.  If you use effective forms of birth control, pregnancy likely will not occur.  Today sexually transmitted diseases are a greater concern than pregnancy outside marriage.  Therefore, knowing where and when to stop is a personal decision, even among those within the Christian community.

If we are to understand that love takes on an embodied form through sexual intimacy, and that an embodied love is central to the marriage relationship, we would be wise to consider the nature of love.   There is great joy expressed in the Song of Songs.  Bodies are celebrated.  In fact the singer goes into great detail describing the bodies of the two lovers.  This is one of the most erotic poems of the ancient world, and it is found in our Bibles.  We know it’s there.  We may quote from parts of it.  But we forget how explicit the language gets.  Hear these words:

While we might not see the analogy in quite the same way, the groom describes the bride’s beauty in very agrarian fashion.  Her eyes are like doves, her hair like “goats moving down the slopes of Gilead.”  Her teeth are like a “flock of shorn ewes” and her “two breasts are like two fawns, twins of a gazelle, that feed among the lilies.”  And on it goes (Song of Songs 4:1-8).  So, if you’re into banning erotic books from the local library, you had better ban the Bible!
Because sexuality is such a powerful force it can be abused and misused.  There is a reason why cultures have placed boundaries on the way in which people have expressed themselves sexually.  The possibility of pregnancy being one reason, but from a spiritual perspective, sex is more than a physical act.  It is also an act that binds two people together.  Once you have engaged in a sexual relationship your relationship with that person will never be the same.  There really is no such thing as “friends with benefits.”  Having become intimate with another person, changes the nature of the relationship.  That is why, when I officiate at weddings I usually make note of the other definitions of love present in the Greek language.
If we begin with eros, which speaks of one’s desire for the other, an understanding of love that is reflected in the readings from Song of Songs, we understand this will be an important aspect of the marriage relationship.  We know to that this aspect of the marriage needs to be rekindled as time passes.  So, romance is important.  Physical intimacy is important.  But it is not the whole of marriage.
It is important therefore to nurture a form of love known in the Greek as philia. This word speaks of cooperative friendship and companionship.  For a marriage to last there has to be more than physical attraction.  You have to like each other.  You have to want to be together and share life’s bounty together.  It’s not uncommon to speak of one’s partner as one’s best friend.  That person will be with you in all of life’s ups and downs.  So it’s best if you see each other as friends.
There is a third word for love, one that I often lift up in a marriage ceremony.  That form is known as agape.  We often speak of agape as being “unconditional love.”  It is similar to the Hebrew hesed, which is often translated as “steadfast love.”  In the Hebrew Bible we hear God declare that no matter what the people God will stand with them in “steadfast love.”  These are important nuances, but I also like the way theologian Tom Oord defines agape as “in spite of love.”   Some will remember the line from the movie Love Story -- “love means never having to say you’re sorry.”   The reality is, as human beings we are imperfect creatures.  We will, given time and opportunity hurt each other.  There will be times where we will have to say “I’m sorry.”  There will be the need for reconciliation – even in the best of marriages.
Marriage involves embodiment.  It involves a physical element.  The way in which that physicality is expressed may change over time.  As we age, that physicality may be more expressed in things like kisses and hand holding, than it is through frequent sexual intercourse.  But however it is expressed, touch is important.  That touch, however, needs to be expressed in concert with friendship and unswerving commitment to the other.  Tom Oord speaks of love being both intentional and responsive.[1]  When it comes to the physical, the eros part of the relationship, it is an act of wasteful self-surrender on behalf of another.   And as Paul makes clear in his letter to the Corinthian church, this relationship should be one of equals.  He tells this community that “the husband should give to his wife her conjugal rights, and likewise the wife to the husband.  For the wife does not have authority over her own body, but the husband does; likewise the husband does not have authority over his own body, but the wife does” (1 Corinthians 7:3-4).

In our day, as we begin to expand our understanding of marriage to include same-sex partners, this will evoke new understandings of what that embodiment will look like.  The message of the Song of Songs, while focused on a heterosexual couple, invites us to embrace embodiment, while Paul's message in 1 Corinthians 7 seems to me to suggest that however we share in this relationship it is to be a partnership of equals.  There is no coercion.  There is no attempt to embarrass.  There is only loving embrace.