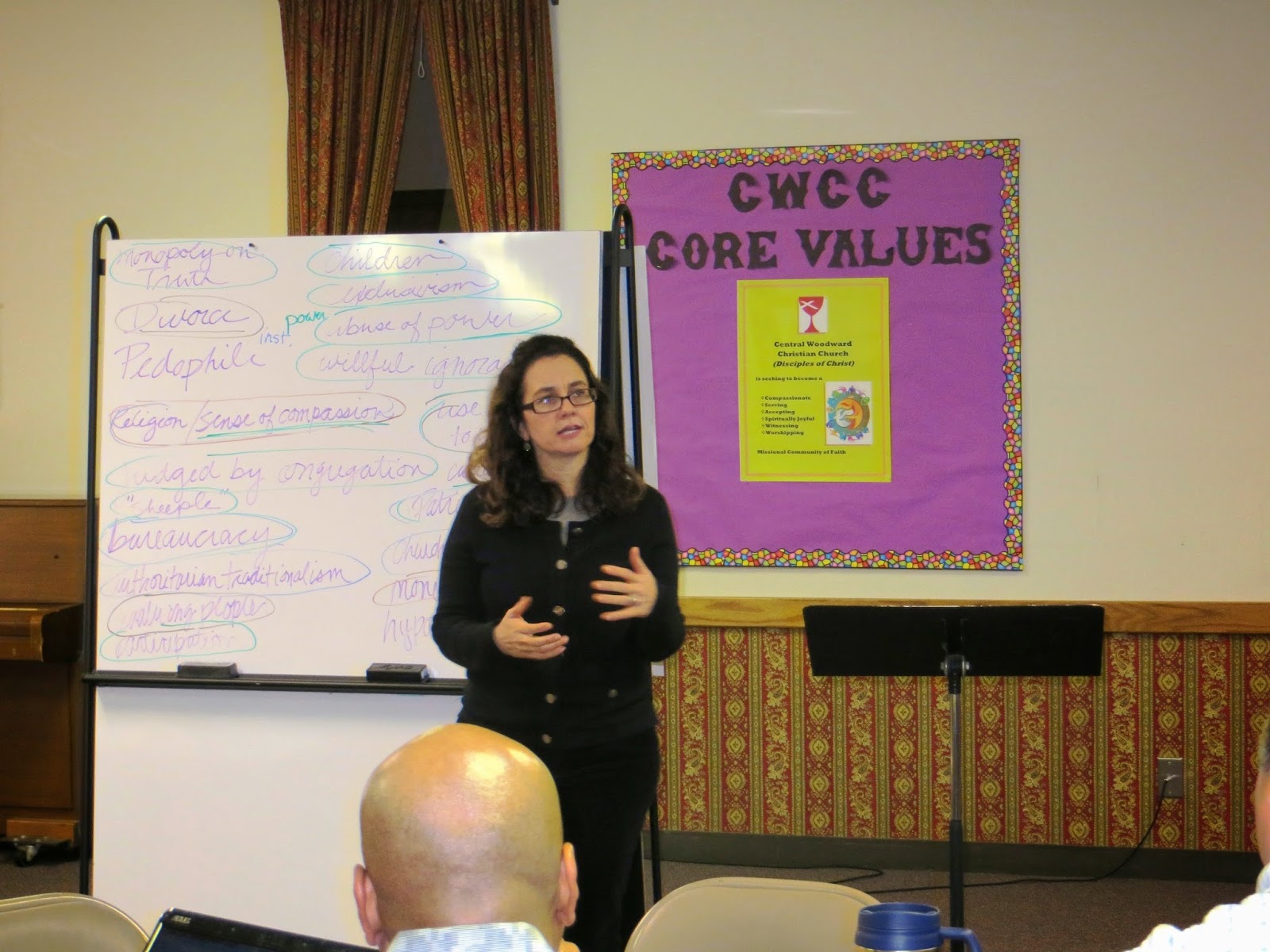 On Friday, the opening day of Central Woodward Christian Church's Perry Gresham Lectures, Carol Howard Merritt led a group of clergy and lay folk in a conversation about the realities of religious woundedness and how the church can respond.  One of the areas we covered was the way we envision and talk about God.

The need is for us to dismantle images of God -- especially patriarchal and violent images.  It is not that we don't explore or think about God as judge or father, or that there is wrath/anger in the descriptions of God in Scripture and elsewhere, but are these the only images?  We can become more violent if  our vision of God is violent, or at least we become desensitized to violence and its usefulness to resolve issues.  If God can wipe out a city, why can't we?


Carol reminded us of an parable that has been attributed to a Cherokee chief (I've been told it may not be Native American, but for our purposes it has value) about feeding two wolves, both of which exist within us.  The parable goes like this:

An old Cherokee chief was teaching his grandson about life...

"A fight is going on inside me," he said to the boy. "It is a terrible fight and it is between two wolves.

"The other is good - he is joy, peace, love, hope, serenity, humility, kindness, benevolence, empathy, generosity, truth, compassion, and faith.

"This same fight is going on inside you - and inside every other person, too."
The grandson thought about it for a minute and then asked his grandfather, "Which wolf will win?"

The old chief simply replied, "The one you feed."

It is the image of God as a white male with power to punish that sits in the minds of many.  These images have turned off many and led to may being wounded.  So what do we do?

Carl spoke of helping people develop new brain paths through new images of God -- including feminine and non-human images.  We can do this through preaching, but more effectively through our hymnody and our prayers.  We create new grooves in the brain, over-writing the traumatic images that dominate, through repetition in liturgy and song.

Language is important.  We need to put the issues on the table and acknowledge the pain that many feel.  We need to recognize that there are two streams of reality -- one is poisonous and one is life giving.  They move in parallel.  As church we have a choice of streams.  We can become a place where people can be honest about their pain and find healing in the presence of God.  As I participated in the conversation, I began to envision a sermon series for the winter months, in which I can address some of these questions.  But it will take more than a sermon series -- but its a start.

I want to close this reflection by connecting to Carol's sermon, which closed the weekend -- we are a "People of Hope."  This is the message that we need to take hold of and share!

This is an especially difficult task, diminishing the impact of the violent references to God. I read a recent blog post which quoted someone saying that "the King of Kings came into this world to die on a cross….” There is a world of difference between living a life that is so threatening to the establishment that it must be violently ended, and the deterministic notion that Jesus was sent by God to die. That difference is the difference between a loving and violent God. As long as “substitutionary atonement” is the dominate theory, we will continually have to deal with violence.
11:55 AM