Mysteries of God’s Realm - Lectionary Reflections for Pentecost 3B 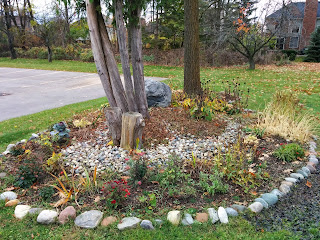 26 He also said, “The kingdom of God is as if someone would scatter seed on the ground,27 and would sleep and rise night and day, and the seed would sprout and grow, he does not know how. 28 The earth produces of itself, first the stalk, then the head, then the full grain in the head. 29 But when the grain is ripe, at once he goes in with his sickle, because the harvest has come.”

30 He also said, “With what can we compare the kingdom of God, or what parable will we use for it? 31 It is like a mustard seed, which, when sown upon the ground, is the smallest of all the seeds on earth; 32 yet when it is sown it grows up and becomes the greatest of all shrubs, and puts forth large branches, so that the birds of the air can make nests in its shade.”

33 With many such parables he spoke the word to them, as they were able to hear it;34 he did not speak to them except in parables, but he explained everything in private to his disciples.

I am not an expert landscaper. I plant things, including grass, and at times things go well and other times not so well.  I’m always happy when I sow grass seed, tend to it, and it comes up like I expected. At other times, no matter what I do, it doesn’t go well.  The same is true for the other aspects of my landscaping efforts.  The one thing I have learned is that no matter what you do, hostas will thrive! I’m not sure why. It remains a mystery. But these things can get really big!

God’s realm is, according to Jesus, also something of a mystery. Seed gets sown and sprouts into grains – first the stalk, then the head, and then the full grain. How and why is not known, it just happens.  Then there’s the mustard seed. It too is something of a mystery. The seed is small, but the bush it produces is huge.  I must admit that the kind of mustard shrub is different than the mustard I came to know during my years living in Santa Barbara. Those mustard plants grow wild across the landscape turning hillsides yellow with their blooms, but I don’t think too many birds make their nests in the branches (as there aren’t any branches).  So whatever bush/shrub Jesus is talking about, it is clear that it is something of a mystery as to how something small grows into something so large that it can produce a shady spot for birds to nest.

Perhaps the most important revelation in this brief passage from Mark’s gospel focuses on Jesus’ penchant for communicating to the public through parables, while explaining everything to the disciples in private. It is a well-worn saw that Jesus used parables because they were easy to understand. They were like the illustrations we preachers use to spice up our sermons. The only problem with this theory, at least with regard to Mark, is that the parables seem to leave everyone a bit befuddled. The disciples don’t seem to understand them, and so Jesus has to explain them.  Rowan Williams, the former Archbishop of Canterbury, points out with regard to a statement in Mark 4:10-12 about the secret nature of this revelation, that Jesus is speaking with a degree of irony. In his use of comparisons (parables of the kingdom) the irony is that the “biggest problem human beings have when confronted with the truth is that they don’t know that they don’t know” [Meeting God in Mark: Reflections for the Season of Lent, p. 42]. They can’t seem to figure out the inner meaning, so they’re stuck on the surface. But the truth of the kingdom lies beneath the surface, if only we’re willing to go deeper. The resources are already there, we just don’t know that this is true.  We watch the grain that we’ve scattered come up, but we can’t seem to grasp why this occurs.  We know the mustard seed is small, but we also know that it produces large shrubs. Why is this?  What is its meaning?

We who are charged with congregational leadership, especially those of us called to serve as pastors of congregations, have been struggling with the realities of the task. Every day we get emails, Facebook posts, and mailings from experts who would be willing to tell us how to grow our churches (for a fee of course). Their strategies are tempting. After all, they have proven effective for selling other consumer products—why not use them to sell our brand of religion?   The fact is, the strategies often work, at least in the short term, though they’re very difficult to implement in small churches with long histories.  Of course, what works with one group of people might not work with the next, which is why mega-churches often have short lives (witness the collapse of the Crystal Cathedral).  This isn’t meant to cast aspersions on large churches, it’s just we can’t depend long term on growth strategies targeted to a specific group and context.

So, here we have this parable about scattered seeds of grain and mustard seeds. They illustrate the essence of God’s realm, and what they seem to illustrate is that the kingdom of God is not a commodity, which we control.   Thus, the kingdom is like seed scattered on the ground, and after we scatter it, it somehow produces grain.  We’re not sure why, but it does.

As for the mustard seed, Amy Jill Levine reminds us that the mustard plant is an invasive shrub that can grow a few feet in height. This parable she suggests, is like other parables that are “satirical and humorous, and highly suggestive: the kingdom is like a shrubby invasive bush!” [ The Jewish Annotated New Testament, p. 68].  If you have a garden you know all about invasive plants. You can go out and spend large amounts on beautiful flowers, which ultimately succumb to the elements. My little rose bushes need regular tending if they’re going to live and grow, but weeds seem determined to thwart my every move to remove them from the garden.  According to Jesus, it appears that the kingdom is like the weed and not like my fragile roses.

In Mark Jesus tries to keep the purpose of his mission a secret. He reveals pieces of his mission to his disciples along the way, but commands them to keep it secret, at least for as long he continues with them in person.  But not to worry: The kingdom is like an invasive bush. Just scatter the seeds and it will take root, making its presence felt. Go ahead, get up and check it out every morning, it really doesn’t depend on you to make it happen.  Your marketing techniques and strategic decisions seem like good ideas, but the kingdom isn’t dependent on our entrepreneurial tactics.


The kingdom has a way of making itself present, transforming the landscape as it moves outward. But the action is happening underground, away from our view. As William Placher puts it in his Mark commentary: “Pastors can preach the word, teachers can teach, Christians of all sorts can try to provide good examples of faith and upright conduct. But conversion to Christian faith does not follow neat recipes. It happens, indeed, underground” [Mark (Belief: A Theological Commentary on the Bible), p. 73].  While this truth does not excuse our inaction, it does stand as a reminder that the realm of God lies not on our shoulders, but upon those of Christ.  God’s realm is something of a mystery, but what may remain invisible to us may be having important consequences that will be revealed only later. We may not see how the seed we've scattered or even watered and tending will bear fruit, but the Spirit is able to do what we're unable to do.
Email Post
Labels: Amy-Jill Levine Gospel of Mark Kingdom of God Lectionary Parables Pentecost Season Realm of God Reflections Rowan Williams William Placher