The Bigger They Are . . . Lectionary Reading for Pentecost 4B

32 David said to Saul, “Let no one’s heart fail because of him; your servant will go and fight with this Philistine.” 33 Saul said to David, “You are not able to go against this Philistine to fight with him; for you are just a boy, and he has been a warrior from his youth.” 34 But David said to Saul, “Your servant used to keep sheep for his father; and whenever a lion or a bear came, and took a lamb from the flock, 35 I went after it and struck it down, rescuing the lamb from its mouth; and if it turned against me, I would catch it by the jaw, strike it down, and kill it. 36 Your servant has killed both lions and bears; and this uncircumcised Philistine shall be like one of them, since he has defied the armies of the living God.” 37 David said, “The Lord, who saved me from the paw of the lion and from the paw of the bear, will save me from the hand of this Philistine.” So Saul said to David, “Go, and may the Lord be with you!”

38 Saul clothed David with his armor; he put a bronze helmet on his head and clothed him with a coat of mail. 39 David strapped Saul’s sword over the armor, and he tried in vain to walk, for he was not used to them. Then David said to Saul, “I cannot walk with these; for I am not used to them.” So David removed them. 40 Then he took his staff in his hand, and chose five smooth stones from the wadi, and put them in his shepherd’s bag, in the pouch; his sling was in his hand, and he drew near to the Philistine.

48 When the Philistine drew nearer to meet David, David ran quickly toward the battle line to meet the Philistine. 49 David put his hand in his bag, took out a stone, slung it, and struck the Philistine on his forehead; the stone sank into his forehead, and he fell face down on the ground.

I'm not preaching today as the congregation is celebrating the thirtieth anniversary of my ordination (June 9, 1985). My friend and colleague, Dr. Glen Miles, pastor of Country Club Christian Church (Disciples of Christ) in Kansas City, MO will be preaching.  Glen and I went to Northwest Christian University back in the late 1970s.  I'm looking forward to hearing his message, even as I contemplate the journey that got me to this place. 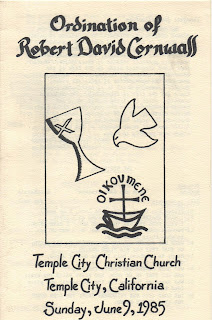 So, what does the story of David and Goliath have to do with ordination anniversaries? Well, since I decided to preach through the lectionary passages this summer that come from 1 and 2 Samuel, this would be the passage for today. In other words, this is the passage I would be preaching from this morning if I was in the pulpit.

When we read a passage like this, we need to acknowledge that parts of it might cause us some heartburn. If we seek to be peacemakers instead of war-makers, how do we hear a story like this? It's easy to allegorize it and thus spiritualize it and perhaps take the edge off of it. And yet, these passages of scripture remind us that life is messy, and that people through the ages have struggled to make a place for themselves. How often have we assumed it's us or them?  That was the message that the young man gave to the police to explain his murderous rampage in Charleston. It's you or us, and since I'm not going anywhere, you've got to go.  So we build walls and fight wars to keep our space.

The people of Israel requested a king to fight their battles. Saul was big and strong, but couldn't defeat the Philistines. They were even bigger and stronger. The people of Israel fell back in fear. They looked at their future and found no hope. They would soon be destroyed or assimilated by their enemies. Then, along came a young man, the youngest son of Jesse. He had come to deliver a care package to his brothers at the front. When he arrived he heard the lament of the people. He heard the insults hurled at the people of Israel by Goliath. When no one would take on this "giant" of a man, David decided to do so. Ultimately, he discerned that Saul's armor and sword did not fit him. Instead, this battler of Bears and Lions, chose to go up against the great champion of the Philistines armed only with a sling and five smooth stones. With these he slew the enemy.

Having laid out the basic elements of the story, I would like to move to allegory. We all face big issues in life. We do this as individuals. I know that churches face them. They seem overwhelming. Fear takes hold. We become paralyzed. We can't make decisions. We close our ears and hearts to the other. There seems to be no hope. And yet, the stories of scripture constantly remind us that with God all things are possible.

I know that Glen is preaching from Romans 8:31-39. It is an appropriate passage to pair with 1 Samuel 17. Rather than taking up arms against the powers and principalities, Jesus used his own methods to overcome the powers.  He did so by way of the cross and the resurrection.  The powers that be, which included the Roman Empire, seemed overwhelming, but as they say: "the bigger they are, the harder they fall."  So, I close this meditation with these words from Romans 8:

37 No, in all these things we are more than conquerors through him who loved us. 38 For I am convinced that neither death, nor life, nor angels, nor rulers, nor things present, nor things to come, nor powers, 39 nor height, nor depth, nor anything else in all creation, will be able to separate us from the love of God in Christ Jesus our Lord.  (Roman s 8:37-39).