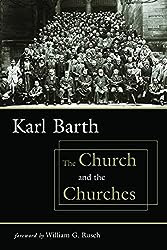 Efforts have been long made by Christians to bring unity to the Christian community.  My denomination, the Christian Church (Disciples of Christ) claims it as our prime directive.We have been regular participants in almost every ecumenical endeavor. It's in our DNA, you might say.   But on what basis do we unite?  Is it just good feelings and a lowest common denominator theological foundation?

I found intriguing these words from Karl Barth, which form part of his little book The Church and the Churches (Eerdmans). When it comes to unity, Barth encourages the different traditions to continue to pursue the issues that are most fully calling to them. Don't let go of your distinctive identities just for the sake of peace. Pursue the study, but do so by listening to Christ.  I found these words intriguing and challenging:

For my part I am convinced that true unity was more of a present and visible reality in the Marburg discussions of 1529 -- which it is fashionable to decry -- or in the polemics of later Lutheran and Reformed orthodoxy -- for which no one has a good word -- than in certain doings of our own day, in which there was so much profession of charity that no one had courage enough left to esquire with serious honesty about the truth, or to allow thesis and antithesis well thought out to meet each other face to face. But to esquire into the truth of Christ is always hopeful, always a work of charity; i is always in all circumstances a service to tthe union of the churches, even when its first result is that no one moves an inch from his thesis, and so the act of division is at first accentuated.  [Church and the Churches, p. 58]

The reference to Marburg here is intriguing as it was at Marburg that Ulrich Zwingli and Martin Luther had a rather rough and tumble debate about the real presence n the Eucharist. Is "This is My Body, " merely a memorial symbol or something more?  The debate was rather fierce, and yet Barth sees this as preferable to a meeting where everyone agrees, believing that the former better exemplifies our unity.  It may seem like division is present, but in the pursuit of truth together we are drawn together more fully. Once again the path to unity isn't a mechanical one, but rooted in the pursuit of Christ.
Email Post
Labels: Christian Doctrine Christian Unity Church Ecumenical Movement Karl Barth Theological debate