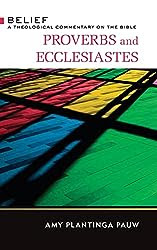 Every culture seems to produce a form of wisdom literature—sacred words meant to give guidance for daily life. The Bible is no different. While very different in their message, two books of the Hebrew Bible, both traditionally linked to Solomon, who was renowned for his wisdom, exemplify this tradition. Preachers are often wary of taking up the texts of Proverbs and Ecclesiastes, the two forms of Wisdom Literature, which receive attention in this commentary by theologian Amy Plantinga Pauw. As Pauw puts it in the introduction “until rather recently, Proverbs and Ecclesiastes were viewed by many modern Christian biblical scholars as stepchildren of the canon, awkward presences whose concerns were largely alien to the center of Israel’s faith” (p. 1). Torah and the Prophets, along with the Psalms seemed more promising. Nonetheless, Pauw finds treasure in these books, and seeks to that treasure with the reader.

This commentary appears in Westminster John Knox’s Belief commentary series.  Pauw is not only the author of this commentary, but she is also the editor of the series (originally the co-editor with the late William Placher). It is a series devoted to theological interpretation of scripture. While the interpreters must engage the critical scholarship, this is not the focus of the commentary. Even as I have been impressed by earlier contributions to the series (Placher’s commentary on Mark and Deanna Thompson’s commentary on Deuteronomy), I wasn’t disabused of that view by my reading of this commentary.  It contained the same commitment to bringing fresh insight to the text in a way that is accessible to the non-scholar and having depth of theological insight.

The author of the commentary serves as Henry P. Mobley Jr. Professor of Doctrinal Theology at Louisville Presbyterian Theological Seminary. Among her earlier works are several books on Jonathan Edwards as well as work on the development of Reformed Feminist Theology. I have known of Amy Plantinga Pauw since the days when we were both M.Div. students at Fuller Theological Seminary back in the 1980s. Even then she had developed a reputation as a scholar and a preacher, a promise that has been fulfilled over these past decades.

While many scholars have deemed Proverbs and Ecclesiastes as being books without much to offer to contemporary theology, Pauw find much of value.  There are a number of reasons why we might want to attend to these works, which she acknowledges are post-exilic in date, with authorship unknown. First, Proverbs is an important contributor to understanding the role of Woman Wisdom in the development of later Christological formulations. While the core of the book, the chapters from 10 through 30, represent a basic word of advice to people living practical lives, it is encased in an ode to Woman wisdom. In addition these books emerge from a context that speaks to our own pluralist world. She notes that “the saves of Israel exhibited a willingness to learn from their cultural and religious others” (p. 2). There is also a strong engagement with the doctrine of creation, which resonates with our current concerns for the environment and being good stewards of creation. They also speak to religious disaffection.

There is much to explore in these books, but we must also keep in mind the tendency to read these words, especially the advice given in Proverbs about diligence and reward, in a way that is similar to that of Job’s friends. There are messages in Proverbs that can easily be used to justify the pursuit of wealth and to beat down further those who suffer. In conversation with theological interpreters from Augustine to the Niebuhr brothers, including among her conversation partners Bonhoeffer, Barth, and Kierkegaard, Pauw seeks to help us see the broader message present in the books.  There is more here than meets the eye. For instance, while Proverbs is a very patriarchal book, being addressed to a young man, warning against the threat of the loose woman, and pointing him toward Woman Wisdom, the way that Wisdom is developed in feminine terms offers a new vision of the role of women in the story.  The message of Proverbs is focused on what we would call common sense, but of a different age. To discern wisdom today will require close attention to the details. With that in mind, and in conversation especially with Augustine and the Niebuhrs, she explores Proverbs, which is a book focused on instruction. Wisdom is not innate, but must be taught. The wisdom offered is practical, but it is rooted in a concern for social ethics (righteousness, justice, and equity), and centered in the premise that “the fear of the Lord is the beginning of knowledge” (Prov. 1:7).

While Proverbs offers much fruit for conversation, Ecclesiastes may be even more intriguing, as it speaks clearly to the existential issues of our day. In her engagement with this text she turns to Kierkegaard as conversation partner. The key word in this text is "hebel" often translated as vanity. Life is vanity. It is ephemeral. She points out that Ecclesiastes also is filled with economic and financial terms, which suggests that the book emerged at a time of economic change, with new economic systems and taxation systems emerging under Persian rule. Thus, “there were both winners and losers in this new economic context, and Ecclesiastes reflects the radical economic insecurity felt by ordinary people” (p. 139).  That would seem to suggest that Ecclesiastes offers a message rather fitting for today.  It is a rather strong contrasting message to Proverbs, which suggests that hard work will lead to blessings. In Ecclesiastes those blessings are not quite so assured.  So, the word of advice here is to slow down and enjoy life. This is all there is.  Make the most of it (within reason). If there is more, well then so be it, but enjoy life now. Yes, this might be an important word for an age in which we find it difficult to slow down and smell the roses.

As one who is interested in interfaith dialog and cooperation, I was also intrigued by the suggestion that “Proverbs and Ecclesiastes speak to our context of religious pluralism.” We can learn from them about how they borrowed and shared the wisdom and insights of those around them. Whereas other parts of the Bible suggest staying clear of outside influences, these books offer a different vision. Of course, we’ve always borrowed. Augustine borrowed from Plato and Aquinas from Aristotle. We’re still raiding our neighbors for wisdom and insight. Proverbs and Ecclesiastes offer us a model for doing so.


Preachers, teachers, and students of the Bible can be helped by engaging critical commentaries and resources.  That said, benefit can also be gained from the insights provided by those outside the field of biblical studies, especially those those who bring to bear the insights of theology (I am biased here in that my training is in historical theology, and so I have a special affinity for history and theology).  This series is an excellent example of how this can be done well. This commentary in particular is full of insight and wisdom. It will, of course, prove to be a valuable addition to one’s theological and biblical library. As I noted in my review of Deanna Thompson's commentary on Deuteronomy, which is also in this series, these commentaries are a pleasure to read -- and rarely does one enjoy reading a commentary from cover to cover.
Email Post
Labels: Amy Plantinga Pauw biblical interpretation Commentaries Ecclesiastes Proverbs Reviews Theology Wisdom Wisdom Literature

Steve Kindle said…
Bob, although you hinted at this, I believe the greatest contribution of Ecclesiastes is that it offers a voice contrary to Deuteronomist theology. In other words, it argues with the dominate theology of Israel. It gives permission to disagree with, or at least question, sacred notions. There are many such examples in scripture, this being the most obvious.
11:12 AM

Robert Cornwall said…
Steve, yes, Amy does take these thoughts up!! You will find it a most interesting read.
11:35 AM

Deanna Thompson said…
Thanks for another really insightful and informative review from the Belief series, Bob! I so appreciated Amy's guidance for my own commentary, and am looking very forward to reading hers. So you next week!
9:39 AM