THE STORY OF NARRATIVE PREACHING: Experience and Exposition: A Narrative. By Mike Graves. Eugene, OR: Cascade Books, 2015. X + 234 pages. 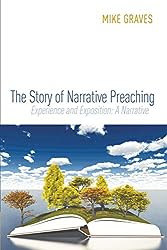 Like beauty good preaching is in the eye (and ear) of the beholder. Depending on your background and expectations good preaching may come in a variety of forms. You may like the old three points and a poem. It was simple and straightforward. You may like stories.  Perhaps you believe that preaching should exposit the biblical text, and that to deviate from that path is dangerous. If you happen to be a preacher you may look to the lectionary for the source of your sermons or you might decide to go topical and preach a series on a particular subject. Whatever direction you take, as a preacher and as a listener to sermons, the expectation is that something of value will be communicated. You might even expect to hear a word from God in that sermon.

Several decades back, preachers and teachers of preachers began to despair at the state of preaching. It was stale and failing to communicate effectively.  Out of this feeling of angst, came a new vision of preaching, one that looked to the Bible itself for inspiration. Realizing that much of scripture is narrative, a new homiletics emerged that emphasized this form. Among the most important practitioners and teachers of this new homiletic, which is also known as the inductive method of preacher, were Fred Craddock and Eugene Lowry.  Among those who have embraced this method, and mastered it, is Mike Graves, who succeeded Lowry as preaching professor at St Paul School of Theology. In The Story of Narrative Preaching Mike introduces us to this method, including the values and principles of the method, in a very appropriate manner – through narrative.  In many ways this is a text book on narrative preaching, but the material is presented in a rather unique fashion.

In the course of the book, Mike shares the origins of narrative preaching. He lifts up both the pros and cons of the method. He gives us examples of how one might offer a narrative sermon.  What is unique here is that Mike has created a fictional version of himself. The lead character in this narrative is Professor A.M. Freeman, the preaching professor at St. Paul School of Theology. Much of the narrative takes place in the context of preaching seminar in which the students are looking at ways of using short stories in preaching.  Rather than directly tell us how one might do this, he shows us how to do this by telling a story.

The other primary characters in the narrative are a group of seminary students. They’ve all had the introductory class and now they are going deeper. Not all of these students, are sold on the idea of either using stories or even narrative preaching.  One of the characters in the book is particularly frustrated, because he is committed to the exposition of the biblical text. Stories, especially non-biblical stories get in the way, or so he thinks. Other students are fascinated by both the stories and their potential to convey the gospel to congregations. In the course of the book we are introduced to short stories by persons such as Alice Walker and Flannery O'Connor, and we're shown how we might use them in conversation with the biblical narrative. Mike gives pointers and principles, but always in the context of a conversation within the class setting.

As is often true with academic disciplines it is easy to get caught up in an either/or mentality. Should we focus on expressing experiences with God or should we exposit texts? Many practitioners of narrative preaching are uncomfortable with the idea of exposition. The stories themselves are supposed to carry the freight. One of the reasons why inductive preaching was successful, especially at first, was that it credited the listener with a certain level of understanding of the gospel. Rather than continually reinforce doctrines and such, the stories could connect contemporary experiences with the Gospel. Mike notes that whereas Fred Craddock could assume some sense of connection between the listener and the biblical story at the time he developed the method, today things are different. Many listeners to sermons don't know the rudiments of the story and so there is more need for explanation and exposition. They might enjoy the stories, but not be able to make the connection.

With this in mind, Mike seeks to weave the two together. The stories are important. They’re not just illustrations. They carry within themselves the seeds of the gospel, whether or not they are intentionally religious. He suggests that one way of working with story and scripture is to weave the stories together, moving back and forth, and stopping along the way to give insight explanation. Interestingly, the students in the story for the most part seem to get it. They see the point. Of course, in a fictional story the author can make sure things fit together appropriately, but I think that he is on the money.

As Fred Craddock noted, we are best served when our sermons match the form of the text.  Turning narrative texts into propositional statements does a great injustice to the text. Since much of scripture is narrative, then we are well served by listening to that voice.

There is a key word in this book. It is the “most important word.” What is that word?  The word is “and.” There is need for exposition, especially at a time when so many do not know the story of the Gospel. They need some help with the characters and the message. But, they also want and need something else. They need to have their hearts touched. They need to experience the story.  There is the need for a different kind of knowledge, one that transcends the intellect. Mike writes:

When I first started teaching, I used to say that church folks raised on the Old Homiletic may have had their notebooks full, but perhaps their lives felt empty. Notes can only take you so far in life. Stories, I used to say, that that’s the real deal. (p. 213).

Without giving up on stories, he had come to believe that there is need of balance – stories yes, but with the presence of exposition; something that lies between the head alone and the heart alone.  In the mixture of the two lively preaching can emerge!

I've been preaching for a long time. I largely was trained in the old homiletic.  In terms of balance I’m probably more on the side of head than heart, but I’ve been learning and growing. While I’m still not a story teller by nature, and I’ve heard as many bad inductive sermons and bad deductive sermons, I’m not too old to learn new tricks.  I did learn much from the book. It is a text book on preaching, but the very fact that it is written in the form of narrative breaks through from head to heart. I’m not sure how the academy – the professional preaching scholars will receive it – but at least for preachers this is a welcome book.  It is also well written, as one would expect from a narrative preacher, who is very competent in the telling of stories. I think that the late Fred Craddock would be pleased!  So, if you're a preacher, you need to read this book!
Email Post
Labels: Biblical Narrative Fred Craddock homiletics Inductive Preaching Mike Graves Narrative Preaching Reviews