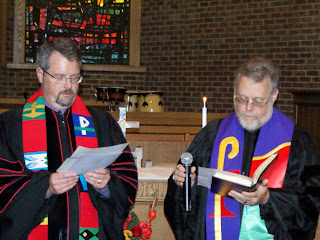 This Sunday I will be starting a summer journey through 1 and 2 Samuel, lectionary readings from the Hebrew Bible.  The reading for Sunday comes from 1 Samuel 8:4-20; 11:14-15.  In this reading the Elders of Israel come to Samuel and request a king, just like all the nations.  This isn't a welcome turn by Samuel (whose sons were administering things in his name) or even Yahweh, because Yahweh was king.   But the people wouldn't give up on this request, so Samuel goes out and finds Saul, who is a fine specimen of a man and even displays charismatic properties (he gets caught up with a group of ecstatic prophets).  Surely this was the right man. He has physical presence and he has charismatic properties.  You might say that he is spirit-filled.  If you know the story, things don't work out well for Saul or Israel. Eventually, he gets a bit caught up in himself and the Spirit leaves and he falls into insanity, especially as a young David begins to emerge as a rival.

So, what does this have to do with us?

Well, in preparation for the sermon I picked up an old seminary text book -- Walter Eichrodt's Theology of the Old Testament (we read both Eichrodt and Von Rad) -- to see what it might say about monarchy, especially in light of Yahweh's statement about rejection of Yahweh's kingship.  Eichrodt notes the difference between what Israel originally tried -- a charismatic form of monarchy, where priestly and prophetic elements were also present.  In many ways this was an attempt to regularize what had occurred during the time of the Judges, where Israel was essentially a confederation of independent tribes who would gather together occasionally for self-defense under a charismatically inspired leader.  The experiment with Saul didn't work, however, and Eichrodt writes:

What had been possible in the case of the Judges over a short period and with limited objectives was not enough for a monarchy designed for permanence, and entrusted with solving the critical problems of the nation's destiny. A broader foundation for its existence was needed than the force of a strong personality. As a matter of long-term policy a constitutional basis, arrived at by agreement with those who till now had wielded political power was, indispensable, if the king was to be able to collect his forces and establish his influence in the intervals of peace between his major campaigns, and above all if he was to be allowed to raise a standing army of professional soldiers. The burden of the Philistine war was bound to force even the local chieftains to accept this viewpoint; and by the same token the prophetic party was in the long run unable to obstruct it.  [Eichrodt, Theology of the Old Testament, Volume One (The Old Testament Library), 444].

Israel faced an ongoing threat -- the Philistines -- and the reason for a king was to be ready even in peacetime to respond. Institution was necessary to be prepared.

I believe in the importance of recognizing and releasing spiritual gifts. I've written a book about just this subject. I stand by it completely. God has gifted us all for ministry, and leadership emerges out of these gifts.  We titled the book Unfettered Spirit: Spiritual Gifts for the New Great Awakening because the Spirit is not bound by our institutions. Therefore, I am willing to own being a charismatic. At the same time, I believe that structure is necessary. There is also the Episcopalian in me! Institution is inevitable, as ancient Israel discovered.  But, institutions are not ultimate. They are ever reformable and must adapt to new realities.

It is interesting to read Paul's letters, where we don't find much description of a permanent institutional church order. There is no hierarchy to speak of. But before the first century is out, we see the beginnings of institution. It's there in Ephesians, which may or may not be Pauline. It's most assuredly there in the Pastorals. By the time we reach the early second century, with Ignatius we see the seeds of a monarchical episcopacy.

Thinking in terms of what Eichrodt wrote about monarchy, how might we go forward keeping a balance between charisma and order?   What can we learn from Saul's experience in leadership?
Email Post
Labels: 1 Samuel Charisma Institutional Religion Institutionalization Leadership Monarchy Samuel Saul Spiritual Gifts Unfettered Spirit Walter Eichrodt