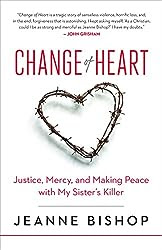 Reconciliation and forgiveness are core doctrines of the Christian faith. Jesus tells Peter to forgive not just three times, by seventy times seven times. Paul writes that God was in Christ reconciling the world to God’s self. Then there’s the call to love not just neighbor but enemies as well.  The message is there, but can we inhabit it?  Perhaps at an intellectual level we can accept the ideas as being true, but what happens when a family member is brutally murdered? How do you forgive? Not only that how can you be reconciled to that person? How do you sit across the table, even if the table is divided by glass and you speak to each other on a phone and a have a conversation that leads to some kind of restoration?  Is it possible that one can experience such transformation in the aftermath of such a tragedy that one’s life takes on new meaning and new purpose?

These are the kinds of questions that are addressed by Jeanne Bishop in her powerful story of life after the murders of her pregnant sister and her husband.  Bishop's story is rooted in faith. It is her faith in God and a desire to make a difference in the world, to make it a better place, a place that reflected her vision of her sister. It is an arduous journey that puts her at odds with family, friends, and even strangers. At the time of the murders, she was an up and coming corporate attorney. After the fact, she gave that up to serve as a public defender. You might have thought that such a person would become a prosecutor, but that’s not the choice she made.


Her story is one that begins with the conviction that as a Christian she was called on to forgive. But forgiving in this case didn’t yet involve reconciliation. That would come much later. What did emerge from the trial of a young man, just eighteen, not yet a full adult, was the sense of relief that the death penalty was off the table. She was satisfied with life without parole, but what she was most concerned about was not letting the murders create within her hate. That’s the root of her forgiveness.

In time she was drawn into a community of victim’s families who had come to believe that the death penalty was immoral and inhumane.  She became an advocate, and in the process came into conversation with persons like Mark Osler, author of Jesus on Death Row: The Trial of Jesus and American Capital Punishment, who helped ground her position in the message of Jesus, the one who was convicted in a court and executed.  Still, even as she had forgiven the man who murdered family members, she had not yet come to the place of reconciliation. At one point she feels convicted that she has not ever named the man who took the life of her loved ones. She preached forgiveness, but couldn’t bring herself to name this person. Not only that, but she had never prayed for him. Twenty years later she came to the conclusion that if she was to be true to her beliefs she would have to name him, to bring him back into memory, and even pray for him, perhaps that he might be restored in some fashion to God and to the human community. From this conclusion she ended up taking the next step and that was to reach out to him. She wrote a letter sharing her story and inviting the opportunity to meet. It was a difficult decision, but she made it. She didn’t know if he would respond or not, but he did. He invited to meet, gave instructions on how to visit, and encouraged her to first speak with his father, who was among the few who came to visit.  In this part of the conversation we discover that for many, life in prison is to be cut off from family and friends.  In his response he also took responsibility for the deaths for the first time. In doing this he took a risk, for now he had confessed. That is part of the process of restoration – to make confession, to take responsibility.

We live in a society today in America where it seems normal to lock people up and throw away the key.  We have the largest prison population in the developed world. The state of Michigan spends more money on prisons than any other aspect of government.  In many places it is the big employer. At the same time the death penalty remains popular, even as we are discovering that there is really no humane way of executing someone. And when we do there’s a decent chance that the person is innocent.  So, what do we do? What is our response, especially for those who follow the Crucified One?

As the book moves forward, and Jeanne Bishop tells her story of transformation, she also tells us how she finds herself at odds with loved ones and with victims’ families who do not share her beliefs. One of the conclusions that she draws early on is that closure never comes. Watching the execution of another doesn’t bring back the loved one, no matter how heinous the crime. So how do you deal with these realities?  The conclusion is an important one. It is a call to pursue restorative justice. The conversations that Jeanne has with David Biro enable him to come to grips with what he had done, to apologize and to show remorse. He’s still in prison, and might for the remainder of his life. There is the possibility of resentencing, and the author isn’t sure how she will respond in that case. She has come out against life without parole for juvenile offenders, like Biro, but she’s not sure she can take the stand on his behalf.  That is understandable.

This is an extremely moving book. It is eye-opening. It is eminently preachable. It is reflective of Christian faith. If, like me, you are an opponent of capital punishment on religious grounds, they you will find your position affirmed and deepened.  For those who are of a different view, Bishop may not convince you -- she has faced tremendous criticism and has taken a lonely path even among her family members -- but hopefully she will raise important questions about the justice system and the way we treat one another.  For many of us this will be a slow and arduous journey.  I want to thank my friend Kelly Hughes, a publicist who regularly sends me books that I probably wouldn’t have picked up on my own, but books that surprise and inspire.

As I conclude the review of this book, which I heartily recommend, especially to preachers, I would like to take note of an important question that Jeanne Bishop raises in the book. It is a profound one for Christians.  Do we consider every person as being redeemable? If we do, then should we not pursue that possibility?  By meeting with David Biro, Jeanne affirmed this to be true.  As for restorative justice, justice may not always be there, and so in the end it is grace that guides to restoration. She concludes:  “Maybe, to follow him, it is restorative mercy we must seek” (p. 149).  With that, I commend the book and its message to the reader.
Email Post
Labels: Books Criminal Justice Death Penalty Forgiveness justice mercy Reconciliation restorative justice Reviews