THE DIVINE MAGICIAN: The Disappearance of Religion and the Discovery of Faith. 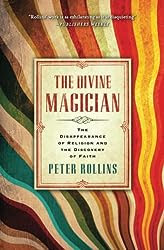 It’s not often that I open up a book and find the author interacting with John Tillotson, the late 17th century Archbishop of Canterbury. Tillotson found himself in this role due to the deprival of the sitting archbishop, William Sancroft, who refused to take the oath of allegiance to the new monarchs. Tillotson was known to be a Latitudinarian, the preacher of an unalloyed message focusing on moral duty rather than sacred mysteries. As Peter Rollins notes, it was Tillotson who made use of the words now connected with magic—hocus pocus—to refer to the Roman Catholic doctrine of transubstantiation. Rollins uses Tillotson’s reference to what Catholics believed to occur in the Eucharist as being a magic trick to take us in the direction he wants us to go.  What if the idea of religion as magic has some usefulness for us? What if the metaphor can help us recognize that traditional understandings of Christianity fall short of being revelatory.

Rollins has become fairly well known in recent years for challenging traditional boundaries, making use of deconstructionist philosophy (he has a Ph.D. in post-structuralist philosophy) to deconstruct Christian religion.  His critique seems in line with others ranging from Christian Piatt to Diana Butler Bass that if Christianity is to survive with some kind of value it must let go of its religious ties. Thus, he is reflective of the postmodern attempt to take an axe to the root of the tree of the Christian religion. Like many others he wants to move us away from a focus on beliefs to practices. To recognize that there is no place for certainty, but that we have to let go of the idea that we can define God.

For Rollins, the Christianity that we have come to know is based on an illusion. Using the metaphor of the magic trick, we have been led to believe that there is something behind the curtain, but when the curtain is pulled back it has disappeared. But in reality nothing disappeared, it simply never was there.  Traditional religion wants us to believe that there is something there and that we need what lies behind the curtain – the sacred object. The way in which the sacred object becomes desirous is the prohibition that has been given to us. Don’t look behind the curtain. That prohibition (The Law in Pauline theology) creates in us a desire for what we have come to believe is a sacred object, the object that will make us whole if we possess it. It is like, as Rollins suggests, the forbidden fruit. There is nothing truly magical about the fruit, but the prohibition creates a desire to have it.  It makes it sacred.

The point of the book, using the language of magic—pledge, turn, and prestige—is to disabuse us of the viability of our quest for the sacred object. It’s not there. We need to let go of the quest.  This occurs through the cross (the turn, which makes the sacred object disappear), and the Resurrection, in which the Prestige is revealed. What the cross does is tear open the curtain in the Temple revealing that nothing is there.  There is no sacred object, nothing to make us whole, God has disappeared.  What does this mean for us—God is not present in a place, thus not in the institution we call church.  The Prestige/Resurrection is the reappearance, and the object we seek reappears not in church but within the profane. That is, the distinction between sacred and profane is eliminated.  All of life, not just what we assumed was the sacred object is sacred. What we considered the sacred object is nothing more than an idol now dispensed with.

The target of Rollins' critique includes conservative evangelicalism and fundamentalism, which in his mind want to hold on to the illusion of the sacred through their belief structures, but these fail to bring wholeness. Nonetheless the structure creates the desire for certainty, which is kept in place by obedience to the prohibition. Liberal/Progressive Christianity may not hold out for the promise of certainty, but it hides its own fears through liturgical practices. In its place he proposes a radical Christianity that is shorn of traditional structures and belief systems. He wants to tear open the curtain, acknowledge that nothing is there, and come together as a non-hierarchical community to share not answers but simply to live as well as possible. In this vision there is no need for the priest or pastor to lead or guide. The community will have to make do on their own.

His vision of Christianity is a radical one, which might look a bit like the Occupy Movement. Rollins celebrates this politically-orientation effort that eschewed traditional leadership patterns and sought to protest and critique without organizing toward accomplishing goals. This is a truly deconstructed form of Christianity. Could this be Christianity after religion? Perhaps.

When it comes to Rollins and his mission, I must admit that I find his work to be unsatisfying. I understand his critique of traditional religion, and I agree with some of it. Perhaps I am not understanding his point, but I’m not sure I buy the solution.  That may be because I am too stuck in my ways. After all, most of those who have found in his work wisdom are younger than me, I find reading him to be laborious. Indeed, I sometimes feel like I'm chasing my own tail. Perhaps, in the end, I am not a radical.  Turning back to the Occupy Movement, which he lifted up as an example of what this radical Christianity might look like. While I agreed with many of the critiques offered by the movement, I didn’t see it as offering any real solutions. It simply marched and occupied, but it didn’t organize in a way that could effect true change.


So what do I make of the book?  While others might find it insightful and enlightening, it leaves me wanting more. I'm not sure I discovered the "faith" promised in the title. Perhaps that is my idol, I don’t know.  As a historian of the English church of the seventeenth and eighteenth centuries I was intrigued by the mention of the long forgotten John Tillotson! As for the book and its contents, I’ll leave it to others to decide if it has a message that speaks to the current situation facing Christianity.
Email Post
Labels: Books Christianity Deconstruction idols John Tillotson Magic Peter Rollins Religion Reviews

Steve Kindle said…
Often critics get the problem right but miss the solution. I'm thinking of Marx on capitalism, for instance. Here Rollins understands that God is not an object, something "out there." And he posits all life as sacred, since this is where God is actually found. So far, so good (says the panentheist in me). As for his solution, well, I don't know, either. It is surely true that Christianity has overemphasized belief at the expense of faith (and works), but I don't yet see how chucking the form makes the substance any richer. But it might.
12:11 PM