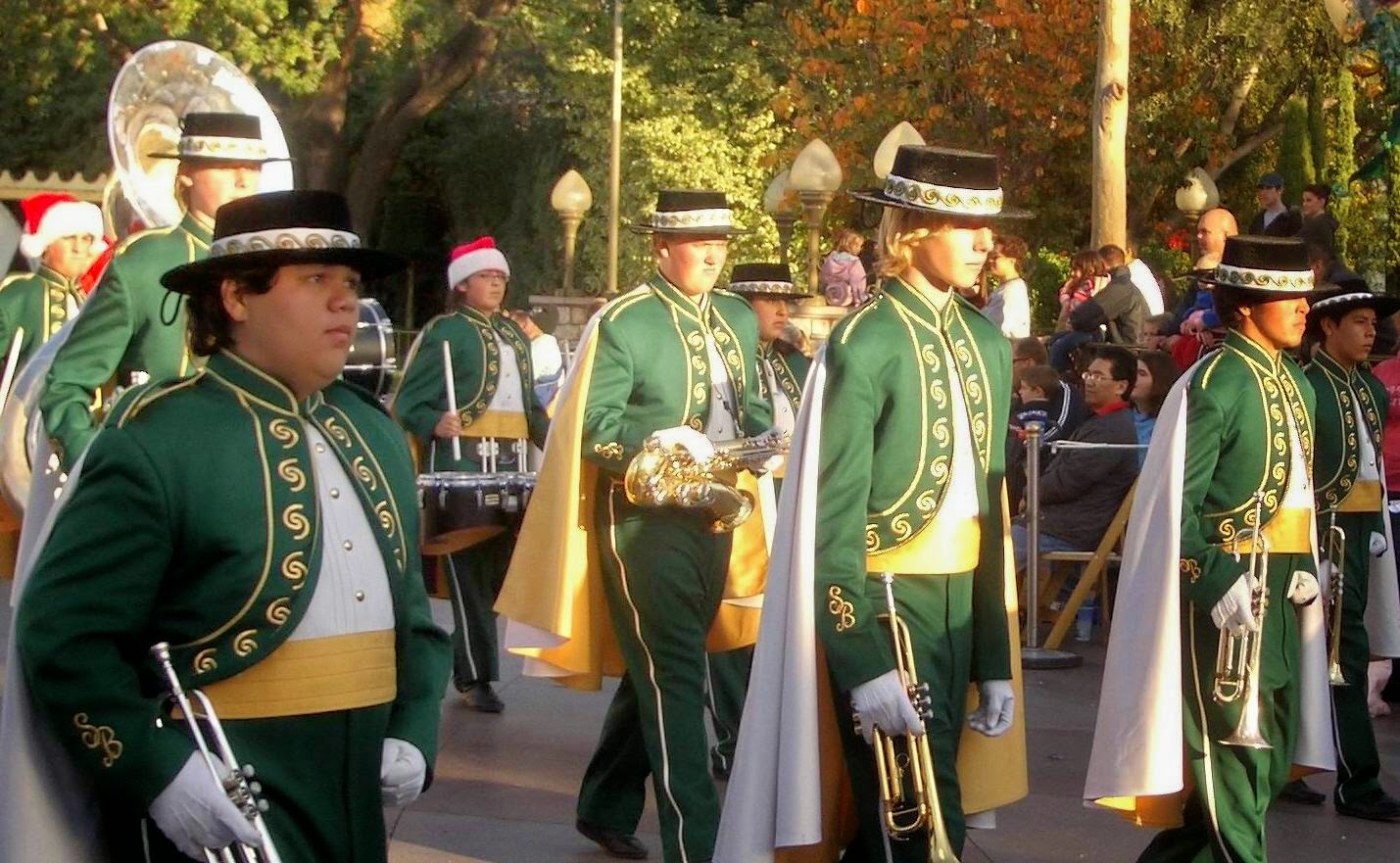 Everyone loves a parade. It doesn’t matter if it’s the Rose Parade or a Fourth of July parade. We love the floats and the bands and the candy thrown to the kids by the paraders! Maybe you’ve been in the parade. You marched in the band, walking what seemed like miles, trying to play your instrument while keeping your feet in proper motion and your lines straight. Maybe you rode on a float, which in a small local parade might be the back of a pickup, or simply walked down the street waving a flag.

When a team wins a championship, the city will host a parade so that the people can celebrate their team. The players ride by waving to the screaming fans, while confetti falls from tall buildings. Of course, the joy doesn’t last long, because teams rarely repeat their big wins.

Most parades send messages. A Fourth of July Parade celebrates patriotism, while a championship parade celebrates the superiority of one’s team over its rivals. As that old song from the 70s puts it: “We are the Champions of the World!”

So, where are you in the parade line up?  Are you staking out your place along the street?  Did you get there early so you could set up folding chairs next to the curb?  Or did you get there late and have to stand on your toes, hoping to get a glimpse of the passing parade? If you have a small child, do you put them on your shoulders so they can see over the crowd?  Maybe you didn’t know there was a parade, but when you heard the band you followed the sound to the parade route. Of course, you could be in the parade!

People living in the ancient world also loved parades. Think of those triumphal parades in movies like Cleopatra. Caesar comes home in triumph, riding in his chariot, leading his legions in their finery. Behind the legions come the captives and the plunder. And of course there is a band!  You can’t have a parade without a marching band.

We had a parade this morning. We marched in led by the children. We sang “King of Kings, Lord of Lords.” We waved our palm branches and celebrated Jesus’ entry into Jerusalem.  But what is the message of this parade?

John doesn’t give too many details about how this parade got set up, but it’s clear that Jesus joined the other pilgrims going into Jerusalem for Passover. When the crowd saw him, they gathered around him and hailed him as their king.  They waved palm branches and shouted “Hosanna! Blessed is the one who comes in the name of the Lord – the King of Israel!”  Then, Jesus found a young donkey, he sat on it, and rode the rest of the way into the city.
The people hailed him as their king, but what kind of king is this? Heroes ride in on war horses or in chariots. But Jesus rides in on a young donkey.  This animal is so small that Jesus’ feet would have dragged on the ground unless he lifted them up. All that John says is that this was written of him. It might seem an odd way to announce yourself as king, but this is the way it was supposed to be.  John points us to the promise of Zechariah:

Do not be afraid, daughter of Zion.
Look, your king is coming, sitting on a donkey’s colt.

If we look closer at Zechariah, we hear these somewhat paradoxical words:

“Lo, you king comes to you; triumphant and victorious is he, humble and riding on a donkey, on a colt, the foal of a donkey.” (Zech. 9:9).

That sounds rather odd – the triumphant and victorious king comes in humbly, riding on a donkey.  We don’t usually put triumphant and humble together, and yet Zechariah does, and John follows up on it.  As for the disciples, they “did not understand these things at first.”

We come to celebrate Palm Sunday already knowing the outcome. We know where this leads. We live in the post-Easter world. We know that Palm Sunday leads to Good Friday. We also know that Good Friday will give way to Easter. At first glance it might seem like Palm Sunday is a bit of a waste. Why bother if the victory lap is short lived?

They say that hindsight is 20/20.  We all know this to be true! Because we know the outcome, we may miss the point of Palm Sunday.  Jesus came to Jerusalem to take possession of it, but he didn’t come in the usual fashion. He didn’t ride in on a war horse. He rode in on a young donkey. He didn’t walk softly and carry a big stick. He made some noise, but he came without a stick. The disciples didn’t understand yet. They needed to experience Holy Week in its fullness in order to understand how the way of Jesus differed from that of Caesar. The parades look similar, but when you dig deeper, you see the difference.

“The disciples didn’t understand these things at first.” Is what was true for them, true for us as well? Do we face questions that don’t offer easy answers? Are there decisions before us that we will find difficult to make or embrace?

At the 2013 General Assembly the delegates affirmed the resolution: “Becoming a People of Grace and Welcome.” As with most resolutions, it had its share of “whereas” clauses and a few “be it resolved” clauses. The resolution included these important clauses:

BE IT FURTHER RESOLVED that the General Assembly calls upon the Christian Church (Disciples of Christ) to affirm the faith, baptism and spiritual gifts of all Christians regardless of their sexual orientation or gender identity, and that neither is grounds for exclusion from fellowship or service within the church, but we celebrate that all are part of God’s good creation; and

FINALLY, BE IT RESOLVED that the General Assembly calls upon all expressions of the Christian Church (Disciples of Christ), as a people of grace and welcome, to acknowledge their support for the welcome of and hospitality to all.

The resolution passed by a hefty margin, though not without dissent. Being that General Assembly resolutions cannot be enforced, congregations are free to ignore them. But, this stands as a word from the larger church to all of its expressions, including local congregations as a call to implement its principles in the life of our churches.

Earlier this week, guided by this resolution, Sharon Watkins issued a statement opposing a new law in Indiana that could allow discrimination against LGBT folks on the basis of religious views. Something similar is in the works here in Michigan. In her statement, she told the governor that if he signed the bill the Disciples would have to reconsider holding the 2017 General Assembly in Indianapolis. Since the governor signed the bill, our leaders will have to decide whether we should move the Assembly. This is a bold move for Disciples. Not everyone in our churches will agree, but Sharon acted on the basis of what is now a core principle of the denomination.

So what does this word from the General Assembly say to us? It’s common for Disciples churches to ignore the implications of these resolutions. But if we live in covenant relationship with other expressions of the church, can we ignore words such as this? Here at Central Woodward we see ourselves as integral parts of the denomination, so it is not in our DNA to simply ignore a word such as this.  So, what is required of us as followers of the one who rode into Jerusalem on a donkey? How should we live out the call to be a people of grace and welcome in our own policies and actions?  If everyone is welcome at the Table, then what does that mean for every other area of church life?

Like the disciples, we may not understand everything at first. It might take time before we understand the meaning of something like Palm Sunday. As a denomination and as a congregation we recognize that not everyone is on the same page on the critical issues facing us. We may disagree with each other, sometimes vociferously, but as the early church discovered at the Jerusalem Council, it is in the midst of our debates and discussions that the Holy Spirit often reveals a way forward.

We may not have a clear understanding of what it means to follow Jesus yet, but, as we move into Holy Week, with Good Friday standing between us and Easter, may we begin to see things from a post-Easter perspective.