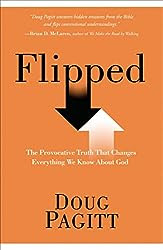 FLIPPED: The Provocative Truth That Changes Everything We Know About God. By Doug Pagitt.  New York: Convergent Books, 2015. 212 pages.

A central theme in the Christian faith is the call to conversion or repentance. To repent is to change direction. John the Baptist, Jesus, and Peter all preached a message of repentance as the pathway to entering the realm of God.  The language of repentance is rather religious and traditional. It has a certain patina to it, and thus it might not speak as usefully to a culture that has eschewed traditional religious language and practices. So, how might one communicate the truth of repentance in a way that would make sense to this new generation that is either unfamiliar with or uncomfortable with religious language? Perhaps one might create new language to communicate basic elements of the Christian faith.  Thus, Doug Pagitt offers us the term “flipped.”  To flip is to change one’s mind/life and go in a different direction.  Better, Doug writes that “change and growth are what Flipped is all about.” (p. 2).

The author of the new book Flipped, Doug Pagitt, is a thoughtful and generous spirit who has made a name for himself by translating traditional Christian beliefs and practices for the contemporary world.  That is the task he has set before himself in this book.  He wants to introduce his readers to the theological discoveries he has made as part of his own faith journey, discoveries that have changed his perspective on God and thus his life.  He speaks of three goals for the book.  First, changing one’s mind is at the heart of Jesus’ message.  Second, that the reader might find a “big, beautiful story of God as you find new ways to live in it” (note the preposition “in,” for that word will prove important throughout the book).  Third, Doug wants the book to be seen as an invitation to “a full, vibrant life in God” (pp. 4-5).

The book is built on the foundation of Doug’s on theological conversion some years back. Having come to faith in an evangelical setting, Doug understood conversion in a personal salvation model, where one invites Jesus into one’s heart (life).  In this conversion experience, his flip, he discerned that rather than inviting God to fill a “God-shaped” hole in one’s life, we are called to recognize that we are living “in God.”  He came to a new understanding of God.  No longer would he envision God as a “separate single subject” who is removed from humanity, but rather he would come to understand God as something much bigger, in which we live and move and have our being.  While Doug never uses the word to describe his new understanding, it would be safe to say that would Doug had discovered was a panentheistic theology.  For the panentheist, while not everything is God, everything is in God. There is distinction and yet there is unity between God and the creation.

With this discovery, Doug found a new way of looking at reality.  First of all, in line with panentheism, change is something to be expected and not feared.  Change is part of growth – and thus it is to be embraced, even if it is not always easy to do so. At the same time, there is no need for “adapters” or mediators that bridge the gap between humanity and God, for we are in God. Thus, the priestly system is unnecessary.

Related to this absence of intermediary is the discovery that faith in God is not transactional. It is not based on the sense of a “if/then” relationship with God.  There is no need for a Temple where we do our religious acts to get God to do what we want.  What it is about is love. This is the one reliable guide to flips. There are no contingencies and no judgment – though I’m not sure if this is true.  Love is discerning, though I’m in agreement that no one is beyond God’s love. Ultimately, Doug recognizes that the world is complicated.
Ultimately this is a book about living a life of integration in God. It is about living as light and not just sharing light. We are one with God without losing our individuality.  In God we live and move and have our being.

Doug is a story-teller.  He’s not afraid to reveal his own struggles and challenges.  He writes for the non-initiated.  He generally stays away from theological language or even religious language.  This makes the book ideal for someone who has little understanding of traditional Christianity and is struggling with the call to faith.  Doug cuts through the jargon and makes this personal.  It might also be a liberating word to those who find themselves trapped in the straightjacket of a narrow version of Christianity.

If one starts with Doug’s book and finds his panentheistic vision intriguing, then it might be useful to move on to a more in depth discussion of panentheism, which often comes in the form of Process Theology.  In that regard, a good brief primer is Bruce Epperly’s little book Process Theology: Embracing Adventure with God (Energion Publications, 2014).  Whether one embraces the full vision that Doug lays out, he offers a vision of life integrated into God. It is a vision that invites transformation, while not turning the process into legalism.

Doug’s discovery isn’t unique. Many have found themselves liberated from narrow and legalistic visions of religion and have experienced a conversion of sorts. The theology that Doug has embraced is not new either, but he does offer a different take on it.  It is also helpful to see something explained through the lens of personal experience, and Doug is good narrating experience.  It is, however, not the final book to read on this subject or theology in general.  While we might not all agree with the content of his flip (embracing a panentheistic view of God and reality), he is correct that change is real, necessary, and has to be engaged. Readers of the book will want to be discerning in their engagement. Doug likes to push and provoke, and such persons are needed in the church.

Steve Kindle said…
So I see Doug hasn't moved you any closer to panentheism or Process, eh? If panentheism doesn't express the God/cosmos relationship as it is, what model does?
12:26 PM

Robert Cornwall said…
Steve, I would say I'm sympathetic to panenthism, which is why I recommended Bruce's brief book, which nicely explains the basics. I've parked myself with the Openness of God group for now as they keep a bit more separation between humanity and God. The Barth in me keeps me from going all in!
2:31 PM

Steve Kindle said…
"Openness of God" is not a cosmology/worldview; it's a theology. It declares limits on omnipotence and omniscience. Well done. And it derives this from scripture. Well done. Yet the scriptural worldview of the three-tiered universe needs to be replaced. I think panentheism explains the scriptural results better than any other cosmological worldview. Barth actually opposes the conclusions of "Openness" as I understand him. But you know him better than I.
7:14 PM

Robert Cornwall said…
Steve, the Postliberal in me (Barth) is less concerned with cosmology. I let that be what it is. I don't accept a 3 tiered universe anymore than most conservative evangelicals or liberals do. Barth predates the Open Theology movement, so I'm not sure where he would land. Moltmann comes close to creating the bridge, and I've always liked him. My struggle with Process is that it seems, to me, overly wedded to one philosophy -- Whitehead. First I have to accept the philosophy and then I do the theology. I'm more comfortable doing the theology and letting the philosophers do their thing!
7:21 PM

Steve Kindle said…
Not being concerned about cosmology is one thing; the necessity of having one is not an option. It can be overt, as in my case, or obscure as in yours. Just wondering what yours is.

You know, my life's ambition is to convert you to Process and panentheism. I'm not doing very well!

One of my favorite quotes is "Behind every theology is a cosmology." I like it because I said it!
7:45 PM

Robert Cornwall said…
Steve, I'm not far from salvation!
9:16 AM