From Nature to Creation (Norman Wirzba) - A Review

FROM NATURE TO CREATION: A Christian Vision for Understanding and Loving Our World (The Church and Postmodern Culture). By Norman Wirzba. Grand Rapids: Baker Academic, 2015. Xii + 162 pages. 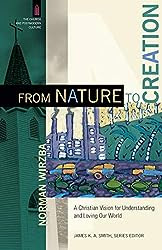 We hear a lot these days about climate change and what that means for us. We also hear that the Christian or even Western monotheism poses a danger to the natural world. After all, in Genesis the human creation is given “dominion” over the earth and its inhabitants. Unfortunately the word dominion has often been understood to mean – do what you will with the earth. These are simply resources placed at human disposal by God. Of course, there’s another way of reading this mandate. It could be that God was calling on humanity to be stewards of creation, taking care of God’s creation. There are Christians arguing for both of these positions, though too often the voices heard the loudest are those claiming divine approval for doing whatever we please with the earth.

One who would argue for a stewarding model of the earth is Norman Wirzba, a professor of theology and ecology at Duke Divinity School. Wirzba is concerned that too many Christians have looked at this life as something to escape, with heaven as the destination. This has led, he believes to disastrous results – both for nature and for theology. Rather than escape this life, faith should “lead us more deeply into the movements of love that nurture and heal and celebrate the gifts of God” (p. 1). In writing this book, which is published as part of Baker Academic's "The Church and Postmodern Culture" series, Wirzba is calling on Christians to develop “an imagination for the world as created, sustained, and daily loved by God” (p. 3). Without this re-imagining creation as loved by God we will find ourselves participating in the degradation of the earth.


Wirzba writes as a theologian who is concerned about creation. In writing this book he wants us to think theologically. He warns against idolizing nature as well as calling on us to honor the creation of God. The book is comprised of five chapters, the first entitled “On Not Knowing Where or Who We Are,” in which he reflects on the suggestion of Nietzsche that God is dead. While some have rejected the idea of God the Creator, many of us are essentially practical atheists who proclaim themselves believers but “may not appreciate the hypocrisy of a misplaced faith that has not learned to seriously scrutinize the idols of modernity that have taken God’s place” (p. 9). Thus, we may not have ditched the Creator, but we’ve bought into a consumerist mentality that is essentially godless. The result is an indifference to the degradation of the earth. In response, Wirzba wishes to invite us to “learn the art of creaturely life, which is “a human life that tries to be attuned to God as Creator and the world as God’s creation” (p. 30).

Having set his vision of creaturely life, in chapter two Wirzba raises the question of the tendency to idolize nature. The danger here, in his estimation, is treating nature as simply a stockpile of resources. While he doesn’t suggest that we abandon the term nature, he wishes that we think rather carefully about how we use the word. There are a number of ways that nature is used. First there is the Greek physis that speaks of enlivening power. There is also the cosmos, which speaks of the natural order. There is the idea of nature as wilderness, that realm in which things exist independent of human intervention. The concern here is the understanding of nature as being something autonomous apart from having a purpose in God, which he believes has both cultural and economic implications. The danger in idolizing nature is we give it the purpose of giving life separate from God.

Raising questions of our understanding of nature, in chapter three he speaks of our ability to perceive creation. In taking up this question, he taps into the world of art, including the development of icons. He invites us to a more ascetic vision, one that put us in a better position to contemplate the mystery of God. By developing a contemplative vision, we put ourselves in a more humble and open position before the Creator and the Creator’s creation.

In chapter four Wirzba returns to human creatureliness. He notes, drawing on Bonhoeffer, that in our striving to be like God (sin), we put ourself in rebellion against our creatureliness. We simply don’t wish to be creatures. We want to be gods. To degrade the earth is to degrade our persons. Rather than dominate for our own purposes, we are called to tend the garden. By recognizing our creatureliness we recognize our finiteness. This leads to pursuing more sustainable ways of living. The key here is that God is seeking to reconcile all things, and not just the human realm. He writes: “Insofar as Christians commit, through their eating, to be a reconcling presence in the world, they may yet learn to be agents of the ‘good news’ that Paul hsays has been proclaimed ‘to every creature under heaven’ (Col. 1:23). Doing that, they will, perhaps learn to assume their creaturely identity” (p. 129).

Wirzba concludes this challenging book by inviting us into Eucharist. That is, we are invited to experience our creatureliness by giving thanks. Wirzba writes:

Giving thanks is the most fundamental and honest expression of what it means to be a human being, because it is here, in the thanksgiving act, that people appreciate and attempt to live into the knowledge that life is a gift (p. 131).

In developing a theology of creation that values and honors the natural world as God’s creation, Wirzba invites us to take a more humble position regarding the world in which we live. We are stewards not rapacious users of resources. These resources are not given to do what we wish with, but rather to be experienced as gifts of God to be cherished as such. This will lead to giving thanks. It will also lead to acknowledging our interdependence with each other and creation as well.  I love the way Wirzba opens his final paragraph: “The action of giving thanks amounts to an awakening of the self to the loveliness of the world.” Indeed!

This is an intriguing book. It has a denseness that is reflective of its scholarly roots. This isn’t a quick read. It requires much thought and reflection. For those of us who are people of faith, it is good to reclaim the language of creation. Nature by itself is easily idolized, but also used to devastating purposes. Recognizing the natural world as creation can enable us to see the world as something God loves and values, a garden into which God has placed us as caretakers not abusers. Let us therefore give thanks for God's gift of creation, of which we are a part!