Gifts of the Dark Wood (Eric Elnes) -- A Review 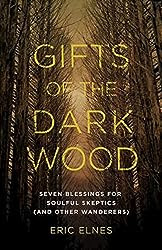 In a world of uncertainty, surely religion can offer a word of certainty. We turn to sacred texts, religious leaders, and institutions for a word from God that will make sense of everything. When things seem to be spinning out of control, we want something permanent and unmovable to hang on to.  When it comes to things spiritual, many Christians are most comfortable when the preacher or other religious leader declares: “The Bible Says.” If the Bible says it then our questions are settled. That is, if you don’t ask too many questions or push too hard, you should be okay. Isn’t that the word that the Wizard of Oz wanted Dorothy and her companions to hear? Unfortunately for the Wizard, Toto figured out who was standing behind the curtain. What happens when we look behind the curtain of our own spiritual traditions? Many give it up as a farce and enter the world sans any spiritual vision. To those who have found themselves in such a position, Eric Elnes, a United Church of Christ pastor wishes to offer a word of wisdom.

Can we find joy and empowerment in what Elnes calls the Dark Wood? And, what is the Dark Wood? It is a place marked by such things as emptiness and certainty, but it is also a place where we find ourselves thunderstruck. What some might see as curses, Elnes sees as blessings.  Elnes speaks of the book being about “recognizing the fierce beauty and astonishing blessing that exists within experiences that most of us fear but none of us can avoid” (p. 2). Elnes invites us to look at the world with new eyes, so that even in “experiences of failure, emptiness, and uncertainty are as critical for finding our way through life as they are unavoidable” (p. 2). The reality that most of us face is not one of constant highs. We all experience lows, perhaps significant lows, but that doesn’t mean that God is absent or we cannot find spiritual sustenance. We simply need to put on a different set of lenses so we can see things differently.

It might be a cliché by now, but living the Christian life is best seen as a journey into the unknown. God is present by the Spirit as we encounter realities that can be distressing, as well as enlightening. Eric Elnes, a United Church of Christ pastor with a Princeton PhD in New Testament, would like to be our guide on this journey.  He invites us to release our mythological imagination, and let the stories of faith and Scripture find resonance in our lives. While he serves as guide, he invites us also to engage with the Holy Spirit, whom he calls "Unexpected Love." Why is love unexpected? Elnes writes that like taking breathes, "we usually don't notice the Spirit acting in our lives until we start paying attention" (p. 14). In this book, Elnes seeks to offer us ways in which we can slow down enough to pay attention so that we might experience blessing.

The heart of the book focuses on seven gifts. These gifts include uncertainty, emptiness, being thunderstruck, getting lost, temptation, disappearing, and misfits.  As I noted earlier many would see these gifts as curses, but they can be blessings instead. So, how for instance can emptiness be a gift? Eric points to the experience of the cross, where Jesus experiences forsakenness and emptiness. But in the midst of that “God found Jesus.” That is, “the message could not be more profound: If you yearn to find God, get empty! Let God find you” (p. 61). Or getting lost, how can that be a blessing? Elnes writes that being lost pushes him to “pay more careful attention to the signals that the Holy Spirit sends me” (p. 85).

If we need a "hero" for the journey, Elnes points us to Peter, for Peter took risks and yet was blessed. It was Peter who heeded (with cautiousness) the Spirit who revealed a new way of being the people of God while in a dream on the top of a roof. The story of Peter's vision and subsequent trip to the house of Cornelius has long had a strong resonance with me. I'm sure Peter was shaken by the encounter, and yet he and the church would be transformed by it. I appreciate this word about what a modern day Peter might experience:

If Peter were a modern-day Christian, he likely would have ignored his gut intuitions altogether and assumed that God's thoughts on the subject of non-kosher food and non-Jewish people had been permanently established in Scripture . . . Ironically, had Peter taken this modern Christian approach and his community followed suit, most modern-day Christians would be refused entry inside Christian churches! (p. 176).

Yes, it took quite a risk on Peter's part to cross the line and embrace those whom he had previously considered an abomination (Gentiles) in order that they might share in the blessings of Jesus' realm. Would we? Do we? Are we ready for a Cornelius moment?

The Dark Wood, a place that can be scary, can be a place where spiritual growth takes place. What Elnes calls the Dark Wood (it is good to note that he leads an alternative religious/spiritual experience called “Darkwood Brew) is similar to what John of the Cross calls the “Dark Night of the Soul.” When all is going well, we are tempted to stop paying attention. But when we enter the Dark Wood our attention is redirected to the one who encounters us on the journey – the Spirit (Unexpected Love).


For those who are seeking to experience God’s presence even though they experience uncertainty and lostness, Elnes offers a most helpful word of wisdom. He writes with an accessible style, reflecting his pastoral sensitivities, but there is also depth to what he writes reflecting his scholarly foundations.  For those who want "straight answers" this book might not suffice. That's not his purpose. But for those who are ready to embrace an unknown future in the presence of God, and who recognize that neither right belief nor right action are always possible, and who understand that “right failure” is not a bad thing, will find this to be a needed tonic.

I should note that Elnes was involved in the creation of The Phoenix Affirmations,  a progressive statement of faith, upon which he wrote a commentary. Those affirmations are reprinted in this book as an appendix. What he writes here is a reflection on those basic principles of Progressive Christianity.

If you are willing to take a walk in the Dark Wood, then you will want to pick up a copy of Eric Elnes' book and read it closely!
Email Post
Labels: Books Christian Journey Dark night of the soul Eric Elnes progressive Christianity Reviews Uncertainty