Moms and Gay Children - A Call to Ministry 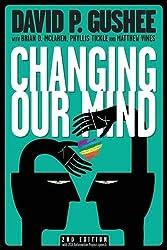 This weekend David Gushee is speaking at Central Woodward Christian Church. David is an evangelical ethicist and LGBT ally. His book Changing Our Mind  is his effort to speak to this issue. We as a congregation haven't finished our journey with this, but I think we've reached a tipping point. As I have shared numerous times, I am an ally. My brother is gay. My cousin is gay. Cheryl's cousin is gay. It's a family issue.

But, until this week I really hadn't realized how crucial it is for the church to minister to families of LGBT children. It wasn't until I had a mother call to see if she could come, and bring some other mothers, who want to know how to bring the church along -- for the sake of their children. They need to know where can they go when the faith they've held sacred comes into conflict with the realities of their children whom they love. When my brother came out, my mom embraced him. My brother, however, let my mother tell me, as he wasn't sure how I would respond. Well, I must confess that I was problem conflicted at the time. I stood against discrimination, but I wasn't ready to affirm. But through study, praying, and meeting more and more gay folks, I chose to be an ally. It may have cost me one pastorate, but it gave me a new calling.

So here we are, more than a dozen years later, and I'm sensing a new calling and a new opportunity for ministry. One of the things I know to be true and David's book confirms is that there are a lot of people who are evangelical in orientation but who find themselves in a new place. They need to hear that their faith needn't conflict with their realities. They don't need to hear that Paul is wrong. They need to hear that Jesus loves their children. They need to hear a word of compassion and support, one that is rooted in the biblical story.

Of course we'll need help in figuring all of this out. David's book is an excellent primer.  I would like to add into the conversation another book written by a friend. Steve Kindle has written a little book titled If Your Child Is Gay: What every parent of a gay child needs to know to insure a positive outcome in an often negative world, (CreateSpace, 2013)

. There are other resources out there as well.